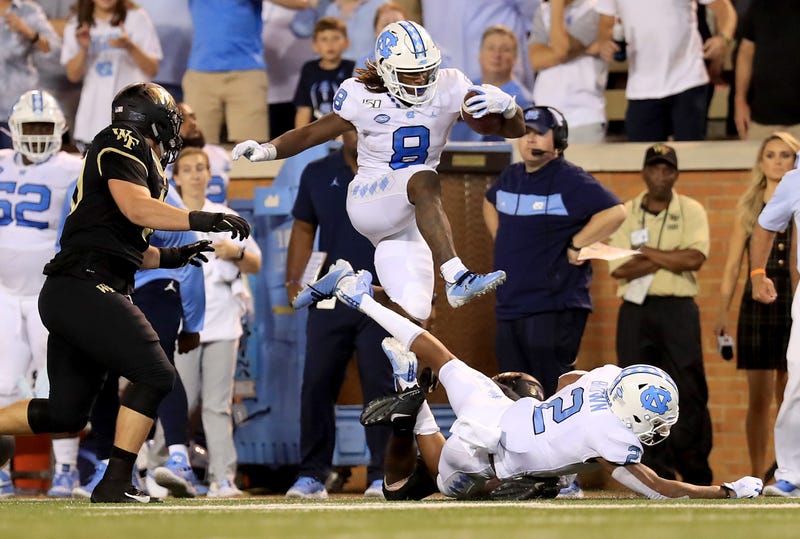 It's a big game for North Carolina this week, as the Tar Heels welcome Wake Forest to Kenan Stadium on Saturday (kick-off is set for noon on WBT).

The Tar Heels still have hopes of playing in the ACC Championship game, but they've got their work cut out for them. They've got to win out in order to even have a shot, and Wake Forest is the next team they've got to beat. The Tar Heels (5-2) have already made short work of fellow in-state rivals NC State and Duke, who they blew out last week, and they're looking to cross the Demon Deacons off the list and claim state bragging rights and pick up another ACC win at the same time. The Demon Deacons are 4-2 and have won four in a row....wait, what? The Deacs are on a four-game winning streak?

Yes, and those wins include Virginia Tech and Virginia, who whipped the Heels a couple of weeks ago. Wake is quite obviously flying under the radar right now, plus they're coming off a bye so they've had an extra week to prepare for the Tar Heels. All of that combines to make them quite dangerous.

The Demon Deacons have an explosive offense which is averaging 421 yards and 37 points per game. Sophomore quarterback Sam Hartman is efficient, completing 62% of his passes. He's only thrown four touchdowns but not one interception - that's impressive.

Hartman's favorite target is Jaquari Robeson, who has 33 catches. Donavon Green is a deep threat, averaging over 19 yards per catch. Freshman Taylor Morin is also in the mix. The Demon Deacons have a solid running back duo in Kenneth Walker III and Christian Beal-Smith. They've combined for 1,000 rushing yards and 15 touchdowns, 11 of them from Walker. The Tar Heels defense has been up and down all season, and their poor rushing defense continues to haunt them, as they gave up 185 yards on the ground to Duke last week.

The good new for the Tar Heels is that their high octane offense can put of a lot of yards and points - they average nearly 538 yards and 41 points per game. But Sam Howell and company will be tested by Wake's defense. Defensive lineman Carlos “Boogie” Basham is one of the best edge rushers in the country and will likely be playing on Sunday's next year.

He leads the Deacs with five sacks and has a forced fumble. Wake also has an excellent passing defense, with 11 interceptions, that's tops in the ACC. Walk-on safety Nick Anderson leads the way with three of those, while Ja'sir Taylor and Zion Keith each have a pick six. They'll have their hands full with UNC receiver Dyami Brown, who has 37 catches for 666 yards and is one of the best receivers in the league.

Wake's run defense isn't so great, though, the Deacs give up over 180 rushing yards per game.  So the Tar Heels will no doubt lean on their outstanding running back tandem of Javonte Williams and Michael Carter. Williams had four touchdowns last week and leads the nation with 17 scores.  “Their offense right now is the best in the ACC and one of the top offenses in the entire country,” said Wake coach Dave Clawson.  “It's going to be challenging to get stops.”

The Deacons got enough stops last season to beat the Tar Heels 24-18 in a game that was much more lopsided than the score indicated.  This time around UNC is definitely the more talented team, and after getting embarrassed at Florida State and Virginia, one that shouldn't be overlooking anyone.  The Tar Heels have plenty on the line with this game, and they can't afford to mess anything up if they have any hopes of playing for the ACC title.  This is the 103rd meeting between these teams, and it should be a UNC win.