EL PASO, Texas (WCBS 880/AP) — At least twenty people were killed and dozens injured after a shooter went on a rampage Saturday at a shopping mall, police in the Texas border town of El Paso said.

Texas Gov. Greg Abbott and El Paso police say 20 people died and 26 others were wounded in the shooting, which happened at a Walmart and in the area near the Cielo Vista Mall.

Dr. Stephen Flaherty said Sunday that a total of 11 victims were taken to Del Sol Medical Center. They ranged in age from 35 to 82 years old. More than two dozen people in all were injured in Saturday's shooting, some of whom were treated elsewhere in the Texas border city.

Flaherty told reporters that "a number of the patients" being treated at Del Sol will need to return to the operating room, and potentially multiple times. 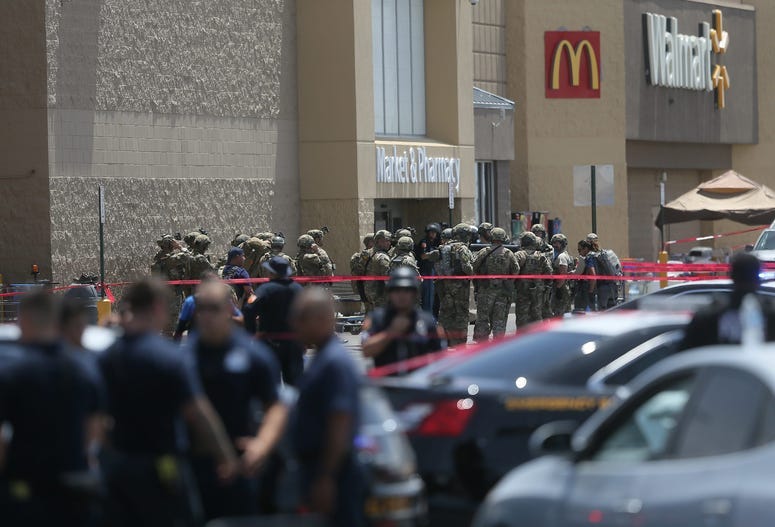 Police said by midafternoon that a suspect was in custody and the public was no longer in danger. Sgt. Robert Gomez said the suspect, who used a rifle, was arrested without incident. Police believe he was the "sole shooter" but are continuing to investigate reports that others were involved.

The suspected gunman was identified by multiple news sources as 21-year-old Patrick Crusius of Dallas.

Federal officials said Sunday that they're treating the shooting as a case of domestic terrorism and considering federal hate crime charges against the suspect. Prosecutors said they're seeking the death penalty.

El Paso Mayor Dee Margo has confirmed police are investigating whether a racist screed posted online shortly before a shooting that killed 20 people in a busy shopping area was written by the suspect.

In it, the writer expresses concern that an influx of Hispanics into the United States will replace aging white voters, potentially turning Texas blue in upcoming elections and swinging the White House to the Democrats.

The writer is also critical of Republicans for what he described as close ties to corporations and degradation of the environment. Though a Twitter account that appears to belong to Patrick Crusius included pro-Donald Trump posts praising the border wall plan, the writer of the online document says his views on race predated Trump's campaign.

Though the writer denied he was a white supremacist, the document says "race mixing" is destroying the nation and recommends dividing the United States into territorial enclaves determined by race. 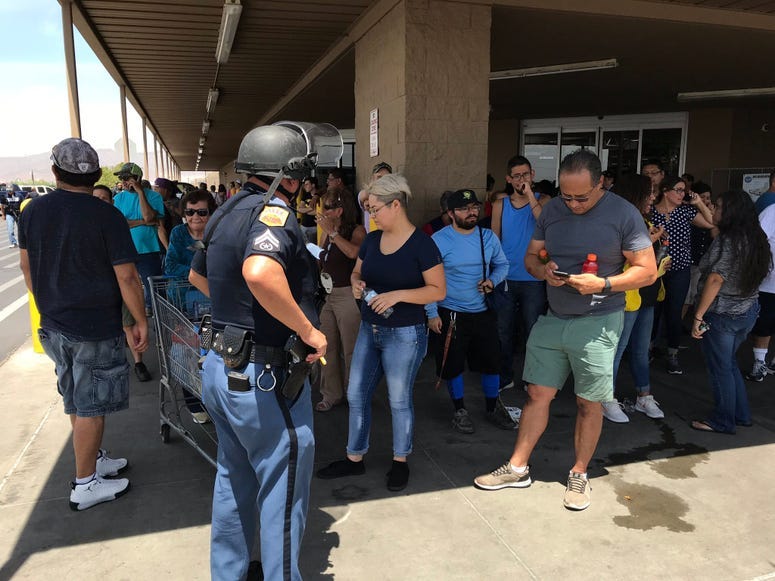 Gomez said at a news conference that anywhere from 1,000 to 3,000 shoppers and about 100 employees were at the Walmart near the Cielo Vista Mall when Saturday's attack happened.

A witness told CBS News that he heard 10 shots as he was heading into the Walmart. He said he saw an older woman fall to the ground but that he wasn't sure if she had been shot.

Video posted online shows people filing through the mall with their hands up. Another video shows a store worker preparing customers to evacuate.

Victims of the shooting in the Cielo Vista Mall in El Paso, Texas are transported and treated by emergency responders Saturday pic.twitter.com/zYBEVQL494

The White House says President Donald Trump has been briefed on the shooting and has spoken to Attorney General William Barr and Gov. Abbott.

Abbott called the shooting "a heinous and senseless act of violence" and said the state had deployed a number of law enforcement officers to the city.

Terrible shootings in ElPaso, Texas. Reports are very bad, many killed. Working with State and Local authorities, and Law Enforcement. Spoke to Governor to pledge total support of Federal Government. God be with you all!

Rep. Escobar said she was "utterly heartbroken" by the situation. Presidential candidate and former Texas congressman Beto O'Rourke appeared a bit shaken as he appeared at a candidate forum in Las Vegas on Saturday shortly after news of the shooting in his hometown was reported.

O'Rourke said he had called his wife before taking the stage and said the shooting shatters "any illusion that we have that progress is inevitable" on tackling gun violence. The Democrat said he'd heard early reports that the shooter might have had a military-style weapon, saying we need to "keep that (expletive) on the battlefield and do not bring it into our communities."

Utterly heartbroken by the developing news in El Paso. Monitoring the situation and in communication with our law enforcement. Please stay safe.

The mass shooting in El Paso came less than a week after a gunman opened fire on a California food festival. Santino William Legan, 19, killed three people and injured 13 others last Sunday at the popular Gilroy Garlic Festival, and died of a self-inflicted gunshot wound.

The NYPD said it's increasing security at shopping areas in the city as it monitors the situation in El Paso.

We continue to closely monitor the developments of the active shooter in El Paso, Texas. Currently, there is no nexus to #NYC.

However, we have deployed additional Counterterrorism Units to shopping areas out of an abundance of caution.

If you see something, say something. pic.twitter.com/dJ8M6uYh6q