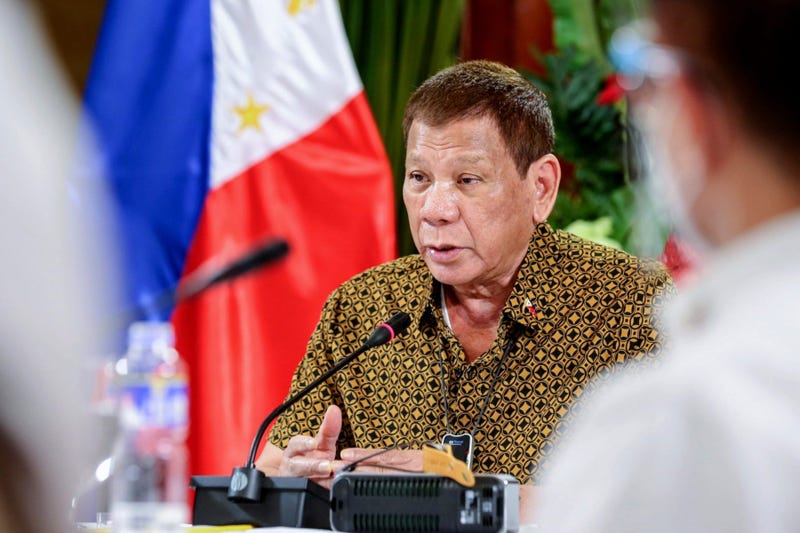 Photo credit In this photo provided by the Malacanang Presidential Photographers Division, Philippine President Rodrigo Duterte talks with members of the Inter-Agency Task Force on the Emerging Infectious Diseases at the Malacanang presidential palace in Manila, Philippines late Monday Sept. 28, 2020. Only one southern Philippine province and its war-battered capital will be placed under a mild lockdown and the rest of the country will be put under more relaxed quarantine restrictions next month to boost the battered economy despite the country having the most number of coronavirus infections in Southeast Asia. (Richard Madelo/Malacanang Presidential Photographers Division via AP)
By The Associated Press

MANILA, Philippines (AP) — One southern Philippine province and its war-battered capital will be placed under a mild lockdown next month and the rest of the country will be under more relaxed restrictions to boost the battered economy of the country counting the most coronavirus infections in Southeast Asia.

Most of Marawi’s commercial and downtown areas were destroyed after hundreds of Islamic State group-aligned militants laid siege to the mosque-studded city in May 2017 and the military launched a massive offensive and airstrikes to quell the five-month uprising. Many residents remain displaced, now staying with relatives or in government-constructed housing units.

Duterte and officials did not provide more specifics on Marawi, but a mild lockdown would restrict most residents at home except for medical emergencies and buying food and other essential trips. Shopping malls and other vital businesses can operate partially but leisure and entertainment centers, along with fitness gyms and movie theaters should be closed.

Classes in public schools are scheduled to resume online belatedly on Oct. 5 due to the pandemic.

The Philippines has confirmed more than 307,000 cases of coronavirus infection and 5,381 people have died from COVID-19 as of Monday.

— South Korea’s daily coronavirus increase was the lowest in about 50 days Tuesday as new infections trend lower. Many experts have warned, however, that the virus could spread again after this week’s traditional Chuseok autumn holidays, when people usually travel to visit their relatives. Health authorities have urged people to refrain from traveling this year because of the risk of spreading the virus. The Korea Disease Control and Prevention Agency said the 38 cases added in the last 24 hours took the country’s total to 23,699 with 407 deaths. Seventeen of the new cases were reported in the Seoul area, which has seen a resurgence that forced more stringent social distancing rules.

— Authorities are concerned by a COVID-19 outbreak aboard a cargo ship off the Australian northwest coast. Eight more members of the Filipino crew tested positive, bringing the number of infections to 17 out of a crew of 21. Seven of the infected sailors remained aboard the bulk carrier Patricia Oldendorff, which is anchored off Port Hedland, a major iron ore export terminal, Western Australia State Health Minister Roger Cook said on Tuesday. The seven are part of an essential skeleton crew of nine. The other 10 infected crew members were in hotel quarantine at Port Hedland. Cook said he wanted to bring the skeleton crew ashore, but the ship would need a replacement crew and to undergo a deep clean before that replacement crew boarded. Health authorities have warned of potentially disastrous consequences if the virus spreads among the Port Hedland community, particularly surrounding Indigenous populations. The ship’s Germany-based operator Oldendorff said the crew were tested for COVID-19 in the Philippines before boarding the ship on Sept. 5. The ship arrived off Port Hedland on Sept. 16 when two crew members were reported ill.