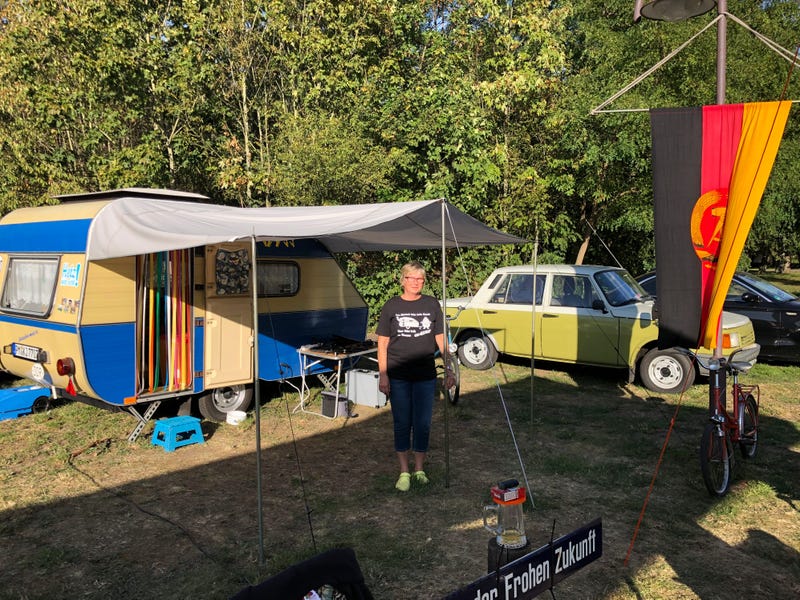 Photo credit Kerstin Ade poses for a photo in front of a historic camper and a former East German Wartburg car, during a meeting of campers in Leipzig, Germany, Saturday, Sept. 17, 2020. It’s been three decades since the reunification Germany, but twice a year camping enthusiasts from the former east allow themselves to forget about how much has changed and relive times past. (AP Photo/Kerstin Sopke)
By The Associated Press

LEIPZIG, Germany (AP) — It's been three decades since the reunification of Germany, but camping enthusiasts from the former East Germany allow themselves twice a year to relive the past and forget about how much has changed.

For most of the 150 families that meet up at a lake on the outskirts of the Bavarian city of Leipzig, the biannual gatherings aren't about capitalism or communism, East or West, but about enjoying a bit of nostalgia among friends with shared experiences.

The official fall reunion was called off because of the coronavirus pandemic, but around 75 hardcore camping families made their own private pilgrimage to keep the tradition that started in 2003 alive.

Arriving at Auensee lake is like stepping into a time machine. Trabant and Wartburg cars, East German makes long-since discontinued, sit parked alongside vintage QEK and Brilliant camper trailers. The owners mill around and chat about bygone days in the former German Democratic Republic.

Born in the city of Ostrava in what was then Czechoslovakia, Gerolt moved to the East German city of Dresden in 1975. He and his wife, Beate, both avid camping fans, started with tents but upgraded to a Brilliant trailer once their children were born.

The couple happened to be camping in communist Hungary in 1989 when the Hungarian government started removing an electrified fence at the border with Austria, an opening that eventually allowed East Germans who dared to make their way to the West.

Faced with leaving their friends, children and entire lives behind, Gerolt and his wife stay in East Germany and credit themselves with making the right decision: the Berlin Wall fell only a few months later.

“I would say that I did everything right," Gerolt said. “The way I went, we went, was the right way. One always learns.”

Gerolt's focus in the first years after German reunification was adapting to his family's new country, and he had little time to spend on his old hobby.

But he finally felt settled and in 2005 took to the road again with his old camper in tow, becoming a regular at the Auensee gatherings.

A more recent participant is Kerstin Ade, 61, a camping fan from the town of Sebnitz. She and her partner bought a used QEK Aero camper trailer in 2015 and revel in the nostalgia of the Auensee visits.

“For me, this is still like being in the former East here," she said. "We got to know and understand the people here, and we meet twice a year.”

Rene Grunert was 13 when the Berlin Wall fell. The resident of the Saxony state town of Plauen says the twice yearly camping weekends are a way to learn more about the former East Germany.

“Overall, one didn’t really notice much. Thirty years passed by and you ask yourself, ‘It’s been 30 years already?’" said Grunert, who today runs a successful gardening business. "That is so fascinating.”