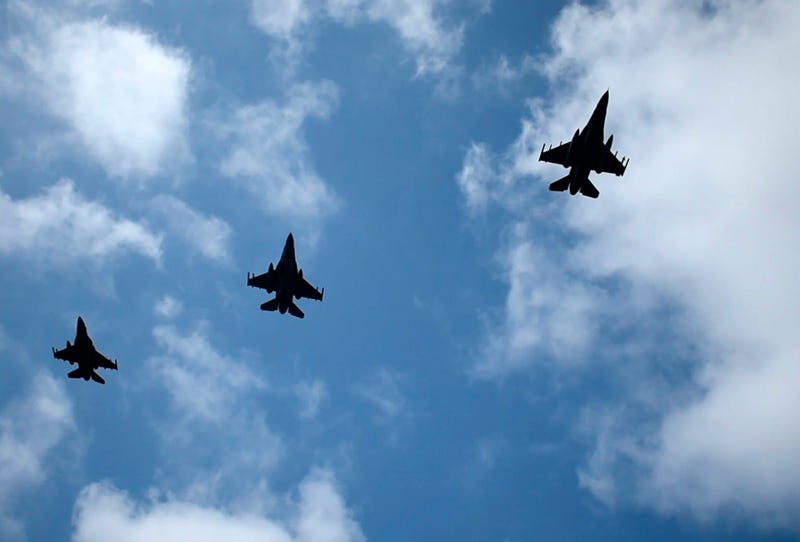 Photo credit In this photo provided by the Greek Defense Ministry on Friday, Sept. 4, 2020, air force jets participate in a joined training drill with armed forces from Greece and the United Arab Emirates near the Greek island of Crete, southern Greece. Turkey's president on Saturday, Sept. 5, 2020, has warned Greece to enter talks over disputed eastern Mediterranean territorial claims or face the consequences. Ankara is currently facing off against Greece and Cyprus over oil and gas exploration rights in the eastern Mediterranean. All sides have deployed naval and air forces to assert their competing claims in the region. (Greek Defense Ministry via AP)
By The Associated Press

ATHENS, Greece (AP) — Greece will bolster its military with new arms, more personnel and by developing the country’s defense industry, the government said Monday, as a tense standoff with neighboring Turkey has led to concerns of open conflict between the two NATO allies.

Ankara is facing off against Greece and Cyprus over oil and gas exploration rights in the eastern Mediterranean Sea. Greece and Turkey have deployed naval and air forces to assert their competing claims.

“The Turkish leadership is unleashing, on a near daily basis, threats of war and makes provocative statements against Greece,” Greek government spokesman Stelios Petsas said. “We respond with political, diplomatic and operational readiness, determined to do whatever is necessary to protect our sovereign rights.”

Petsas said Prime Minister Kyriakos Mitsotakis would be announcing details of plans to upgrade the country’s military during his annual state of the economy speech on Saturday.

Last week, Greece raised 2.5 billion euros ($2.96 billion) in a bond auction as the country seeks to increase military spending and raise funds for businesses affected by the coronavirus pandemic.

Greek media have reported the purchases may include French-made Rafale fighter jets and at least one French frigate. Petsas said Mitsotakis would be meeting with French President Emmanuel Macron on Thursday on the sidelines of a meeting in Corsica of the European Union's Mediterranean countries.

On Monday, Turkish President Recep Tayyip Erdogan characterized Greece’s armed forces as “dilapidated” and called on Athens to seek a dialogue with Turkey. He also criticized the EU, which has backed EU member Greece in the dispute.

“I advise those who, instead of sitting around the table with us, show defiance with their dilapidated military forces, to carefully inspect our diplomatic efforts and military operations of the past four years,” Erdogan said following a Cabinet meeting.

“They’re either going to understand the language of politics and diplomacy, or in the field with painful experiences,” he said.

On Monday, a senior NATO official met with Turkish Defense Minister Hulusi Akar and senior military officials in Ankara, and discussed the standoff as well as a NATO initiative aimed at avoiding the risk of accidents between the two allies.

Akar’s office said he told Gen. Stuart Peach, the chairman of the NATO Military Committee, that Turkey backs the NATO initiative, attaches importance to “dialogue and good neighborly relations” for the resolution of problems but that the country was determined to protect its rights in the eastern Mediterranean.

In Athens, Greek Foreign Minister Nikos Dendias said Turkey was the only regional country “that threatens its neighbors with war when they want to exercise their legal rights — in blatant violation of the U.N. Charter.”

He added Turkey "has a clear choice: dialogue without threats or sanctions.”

Greece and Turkey have come to the brink of war three times since the mid-1970s, including once over exploration rights in the Aegean Sea.

The current dispute escalated when Turkey sent seismic research vessel, the Oruc Reis, accompanied by warships, to prospect for oil and gas reserves in an area between Cyprus and the Greek island of Crete that Athens claims as its own continental shelf.

Greece sent its own warships to the area and put its armed forces on alert.

music
With the CMAs and her husband's shirtless chores, Miranda Lambert has a lot to look forward to
music
BTS was front row at the World Series, kinda
music
Megan Thee Stallion calls Tory Lanez 'genuinely crazy' after he insists they are still friends
sports
Washington Football Team could keep name through 2021 season
sports
MLB star Max Scherzer puts luxurious $15 million Virginia home on the market
sports
Bears DE: We are 'without a doubt' built to win the Super Bowl