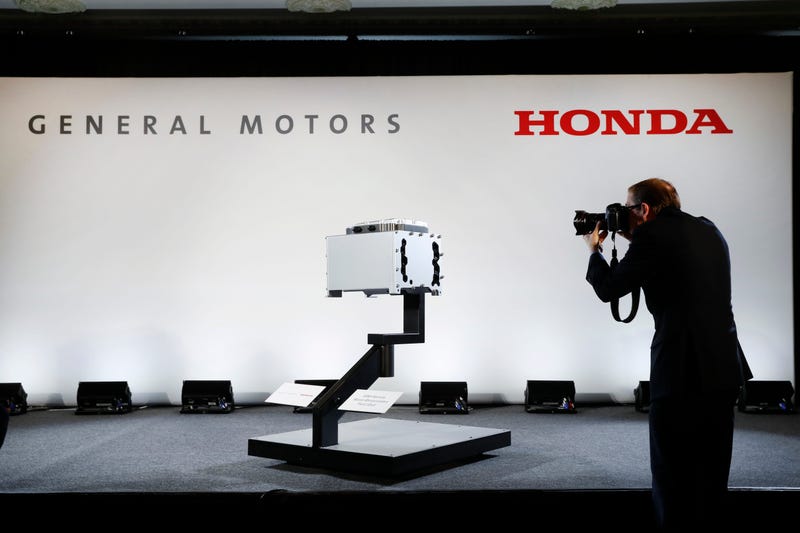 Photo credit FILE -In this Jan. 30, 2020 file photo, a photographer captures images of the General Motors-Honda Next Generation Fuel Cell after a news conference in Detroit. On Thursday, Sept. 3, General Motors and Honda say they have signed a deal to explore sharing vehicle underpinnings and propulsion systems in North America. The companies say planning discussions on jointly designed vehicles will start immediately and include vehicles powered by both electricity and internal combustion engines. (AP Photo/Paul Sancya)
By The Associated Press

DETROIT (AP) — General Motors and Honda are moving toward an alliance in North America to share vehicle development and technology costs as the industry moves toward electric and autonomous vehicles.

The nonbinding memorandum of understanding was announced Thursday, and the companies say they plan to share vehicle underpinnings as well as engines and transmissions.

It's another sign of increasing consolidation in the automotive business as companies face huge capital outlays to develop current products as well battery-powered and self-driving vehicles.

“The auto industry has a long history of being pressured by costs and lower (profit) margins,” said Edward Jones analyst Jeff Windau. "They’re trying to get to the other side here on an expensive vehicle development process, and being able to do that as efficiently as possible.”

No details were given on what vehicles would be developed jointly, but the companies said in a statement that planning work will start immediately and include vehicles powered by both electricity and internal combustion engines. Engineering work would begin early next year. They also will cooperate on manufacturing, parts purchasing, research and connected services.

Earlier this year, crosstown rival Ford finalized a similar deal with Germany's Volkswagen, while Italian-American automaker Fiat Chrysler is heading toward a merger with France's PSA Peugeot early in 2021.

In the GM-Honda deal, the companies say they'll collaborate on a “range of vehicles sold under each company's distinct brands.”

The announcement builds on work the companies have been doing jointly on electric and hydrogen fuel cell vehicles, as well as an autonomous vehicle. In April the companies announced they would jointly develop two electric vehicles for Honda based on GM's global electric vehicle platform. Windau said the fuel cell work started in 2013, so it's no surprise that the cooperation would be broadened.

“The alliance will help both companies accelerate investment in future mobility innovation by freeing up additional resources," GM President Mark Reuss said Thursday in a statement. He said the companies would get “significant synergies” in developing vehicles.

“We can achieve substantial cost efficiencies in North America that will enable us to invest in future mobility technology, while maintaining our own distinct and competitive product offerings,” Honda Executive Vice President Seiji Kuraishi said in the statement.

The alliance would be governed by a joint committee of senior executives from both companies, the statement said.

Windau said the alliance could extend to one company making vehicles for the other at one of its factories in the U.S., where GM has excess manufacturing capacity. It would be relatively simple to build a Honda on a GM assembly line if the vehicles were built on the same platform and had the same powertrains, he said.

Differentiating between Honda and GM vehicles built on the same underpinnings could be a problem, although Windau expects GM to focus on trucks and larger vehicles and Honda on vehicles built off of car platforms.

Windau says he doesn't see the alliance evolving into a full merger between the U.S. and Japanese automakers.