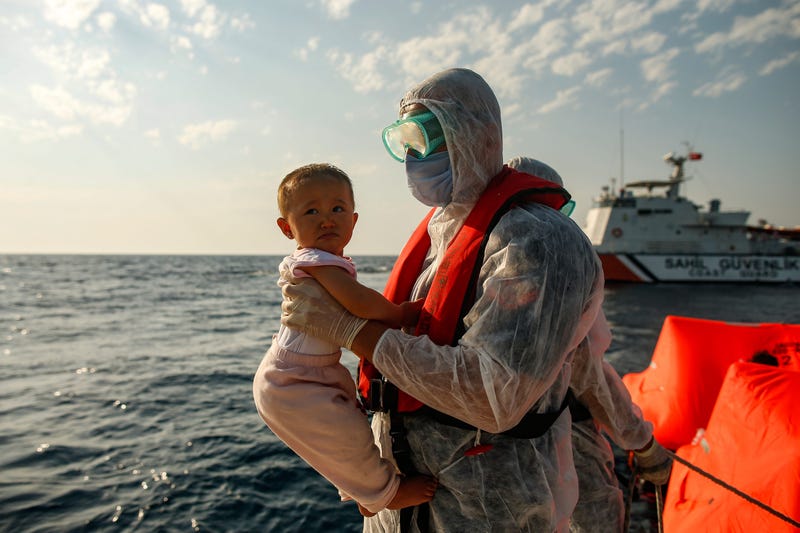 Photo credit A Turkish coast guard officer, wearing protective gear to help prevent the spread of coronavirus, carries a child off a life raft during a rescue operation in the Aegean Sea, between Turkey and Greece, Saturday, Sept. 12, 2020. Turkey is accusing Greece of large-scale pushbacks at sea — summary deportations without access to asylum procedures, in violation of international law. The Turkish coast guard says it rescued over 300 migrants "pushed back by Greek elements to Turkish waters" this month alone. Greece denies the allegations and accuses Ankara of weaponizing migrants. (AP Photo/Emrah Gurel)
By The Associated Press

DIKILI, Turkey (AP) — Shortly after reaching the Greek island of Lesbos, a group of Afghan migrants say, their hopes for a new life in Europe were cut short when Greek authorities rounded them up, mistreated them, shoved them into life rafts and abandoned them at sea.

Associated Press journalists on a Turkish government-organized coast guard ride-along were aboard the patrol boat that picked up the 37 migrants, including 18 children, from two orange life rafts in the Aegean Sea on Sept. 12. Two other media organizations on similar government-organized trips in the same week witnessed similar scenes.

“They took our phones and said a bus will come and take you to the camp,” Omid Hussain Nabizada said in Turkish. “But they took us and put us on a ship. They left us on the water in a very bad way on these boats.”

Turkey, which hosts about 4 million refugees, accuses Greece of large-scale pushbacks — summary deportations without access to asylum procedures, in violation of international law. It also accuses the European Union of turning a blind eye to what it says is a blatant abuse of human rights.

The Turkish coast guard says it rescued over 300 migrants “pushed back by Greek elements to Turkish waters” this month alone. Citing what they say are credible reports, international rights groups have called repeatedly for investigations.

Greece, which lies on the EU’s southeastern border and has borne the brunt of migration flows from Turkey, denies the allegations and in turn accuses Ankara of weaponizing migrants.

In March, Turkey made good on threats to send migrants to Europe, declaring its borders with the EU open. In what appeared to be a government-organized campaign, thousands headed to the Greek border, leading to scenes of chaos and violence. Turkey’s border with EU member Bulgaria was largely unaffected. Greece shut its frontier and controversially suspended asylum applications for a month.

Greece’s coast guard says Turkey's coast guard frequently escorts migrant smuggling boats toward Greece, and has provided videos to back its claims. It says under a 2016 EU-Turkey deal to stem migration flows, Turkey has an obligation to stop people clandestinely entering Greece.

Greek coast guard spokesman Lt. Cmdr. Nikolaos Kokkalas said its patrols regularly detect boats and dinghies carrying migrants trying to enter Greece illegally, and “among them many times there are also inflatable rafts such as those described” by the AP.

The life rafts are standard safety equipment on recreational boats, designed to keep passengers safe if they must abandon ship. They generally have no means of propulsion or steering.

Uneasy neighbors Greece and Turkey have been at loggerheads for decades over several territorial issues, and asylum-seekers have found themselves caught up in the geopolitical conflict.

Tension between the two countries rose dramatically this summer over eastern Mediterranean maritime boundaries, leading to fears of war.

Both sides deployed warships as Turkish survey ships prospected for gas in waters where Greece and Cyprus claim exclusive economic rights. EU leaders are to discuss imposing sanctions on Turkey for its actions, in an Oct. 1-2 summit. Turkey has repeated its threat to send migrants into the EU if sanctions are imposed.

The persistent allegations of pushbacks of migrants are the latest manifestations of these tensions.

Other rights groups and refugee organizations, including the U.N. refugee agency, have repeatedly called on Greece to investigate what they say are credible reports and testimony of such expulsions occurring.

“UNHCR is particularly concerned about the increasing reports, since March 2020, of alleged informal returns by sea of persons who, according to their own attestations or those of third persons, have disembarked on Greek shores and have thereafter been towed back to sea,” the agency said in August.

UNHCR Assistant High Commissioner for Protection Gillian Triggs, reiterating the call for an investigation, said that “with our own eyes on Lesbos, it was quite clear no boats were coming through” recently.

Earlier this month, Greece’s Shipping Minister Giannis Plakiotakis said Greek authorities prevented more than 10,000 people from entering Greece by sea this year. He would not elaborate on how.

Former Migration Minister Ioannis Mouzalas pressed for details from the current minister, Notis Mitarachi, in parliament Sept. 21, saying this appeared to violate Greek and international law. He asked directly whether the government carries out pushbacks.

The four Afghans on the life rafts seen by AP said they reached Lesbos from Turkey’s western Canakkale province on the night of Sept. 11-12, and were caught by Greek law enforcement during daylight.

One of them, Nabizada, said police hit him while forcing him into the raft.

“They didn’t say, ‘there are children, there are families, there are women.’ … People don’t do this to animals. The Greek police did it to us,” said the 22-year-old. He said he left Kabul in 2017 and crossed to Turkey via Iran, aiming for Europe.

Zohra Alizada, 14, said police took their phones and money, put them in the rafts and left. She was traveling with her parents and two siblings after living in Kars, in eastern Turkey, for over four years. She said the migrants called the Turkish coast guard for help.

Her father, Mohammad Reza Alizada, said Greek authorities inflated the rafts “and they threw us like animals inside.”

The AP was not able to independently verify their accounts.

The Turkish coast guard, clad in protective equipment against COVID-19, took them aboard after checking them for fever. Another Turkish coast guard vessel was already in the area when the patrol boat carrying the AP crew arrived.

Turkish Foreign Minister Mevlut Cavusoglu raised the allegations against Greece in an August news conference with his German counterpart.

He said Turkey has shown through government and media reports that Greece is pushing back refugees at sea, adding that “there have been numerous articles published.”

“How do sinking boats in the middle of the Aegean Sea or sending them to Turkey by pushbacks fit international rights and universal values?” Cavusoglu said.

An independent Norway-based watchdog says it has documented at least 50 cases since March of migrants being put into life rafts and left adrift.

“They are not going into these life rafts willingly. They are forced,” said Tommy Olsen of the Aegean Boat Report, which monitors arrivals and rights abuses in the Aegean.

He said his group had no information about the rafts the AP saw, but that it was consistent with similar reports.

“Usually you save people from life rafts,” Olsen said. “You don’t put them on life rafts and leave them.”

Fraser reported from Ankara and Bilginsoy from Istanbul. Ayse Wieting in Istanbul, Elena Becatoros in Athens and Nadine Achoui-Lessage in Geneva contributed.