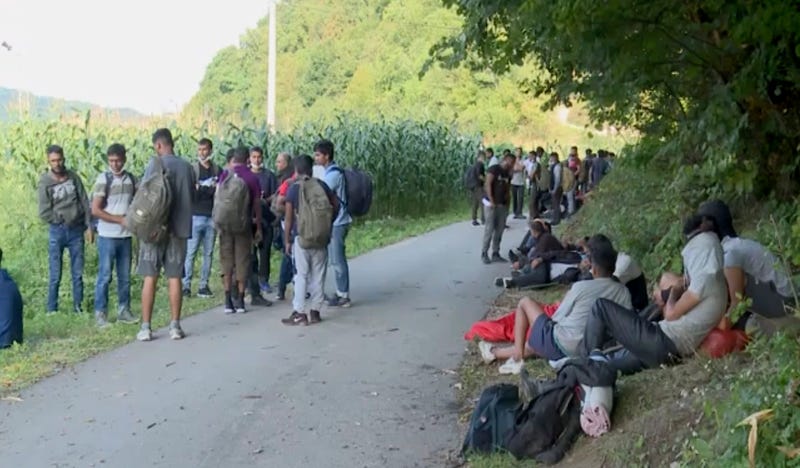 Photo credit In this grab taken from video migrants who were directed off a railroad by police blocking the path gather, in Bosanska Otoka, Bosnia, Monday, Aug. 24, 2020. Bosnia’s quarreling ethnic leaders have put migrants amassed in the country while seeking entry to Europe at the center of a a political tug-of-war. Local authorities in the northwestern Krajina region have set up roadblocks to prevent migrants from entering the area under their jurisdiction, leaving hundreds trapped on the side of a road without access to food or shelter. (AP)
By The Associated Press

SARAJEVO, Bosnia-Herzegovina (AP) — Authorities in a northeastern region of Bosnia, decrying an alleged failure by other parts of the country to share the load of a lingering migration crisis, have set up roadblocks to prevent Europe-bound migrants from entering the territory under their jurisdiction.

In an apparent violation of Bosnia’s human rights and immigration laws, local authorities deployed police officers to the main highway connecting the Krajina region to the rest of the country with orders to stop and turn back all the migrants they encounter.

In response, the police forces of adjacent administrative regions started blocking migrants from walking back to their areas.

Krajina authorities began enforcing their decision to ban all new migrants arrivals in the last three days. In that time, around 200 people, including women and children, were taken off buses and trains and left trapped on the side of a road near the town of Bosanska Otoka.

Ali Razah, who is from Pakistan, said various police units had blocked him and other migrants from moving in any direction.

“There is no food, no water, nothing…and we are staying on the grass,” he said.

When other nations in the Balkans and central Europe closed off previously established migration paths, Bosnia became a bottleneck for thousands of migrants from the Middle East, Central Asia and North Africa seeking better lives in Europe.

Migrants mostly enter Bosnia across the Drina River, on its eastern border with Serbia. From there, they traverse the impoverished and ethnically divided country to reach Krajina, which stretches along a highly porous segment of Bosnia's border with EU-member Croatia.

Local authorities in Krajina have long accused Bosnia's central government of subjecting the migration crisis to political infighting and failing to provide them with any practical help.

Bosnian Serb hard-line leader Milorad Dodik, who currently holds a seat in Bosnia’s multi-ethnic joint presidency, has blocked efforts to deploy the army along the border with Serbia to stem the influx of migrants.

Dodik, who has repeatedly pressed for Serbs to separate from multi-ethnic Bosnia and unite with Serbia proper, has used the migration issue to promote his Serbian-first position. He refused to accommodate any migrants in the country’s autonomous Serb-run half and instead pushed them into Krajina.

Bosnia went through a bloody inter-ethnic war in the 1990s that killed more than 100,000 people and left millions homeless. The U.S.-brokered 1995 peace deal for Bosnia has split the country along ethnic lines into two highly autonomous parts - the Serb-run Republika Srpska and the Bosniak-Croat Federation.

The two parts are linked by a complicated network of central, multi-ethnic governing institutions which are supposed to rule by consensus but instead tend to turn even the most mundane issues into numbing political tugs-of-war.