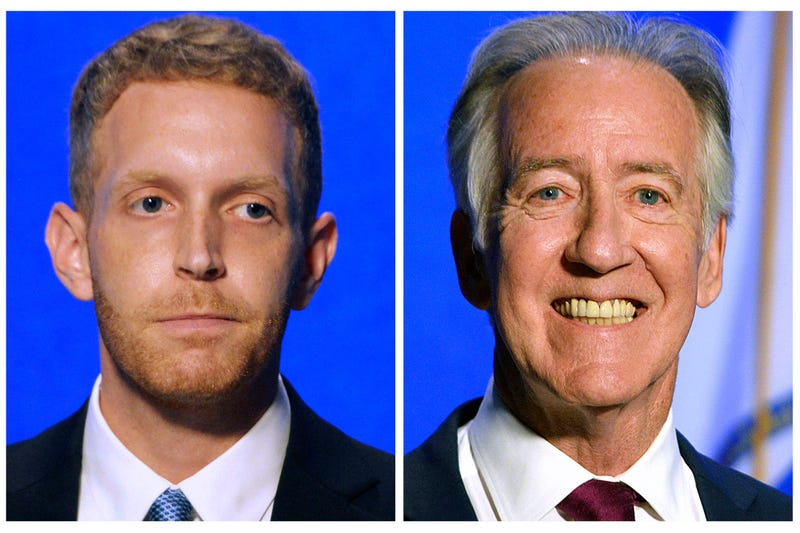 Photo credit FILE - In this pair of Aug. 17, 2020, file photos, Holyoke Mayor Alex B. Morse, left, and U.S. Rep. Richard E. Neal, D-Springfield, right, wait for the start of a debate in Springfield, Mass. Morse is a candidate and Neal is the incumbent in Massachusetts' 1st congressional district in the Sept. 1 Democratic primary election. (Don Treeger/The Republican via AP, File)
By The Associated Press

WASHINGTON (AP) — Progressives trying to shove Congress to the left by competing in this year's Democratic primaries ousted three moderate incumbents, won other victories and established themselves as a force that's not going away.

But some challengers lost, and their overall wins were a modest number compared with the 535 House and Senate members. That means it's been a mixed bag of results for progressives in this year's races, leading party centrists to minimize those gains and assert that congressional Democrats' power is really wielded by moderates.

“If this is what they call a win, they can have this cycle every two years for the next 20,” he said. "I'd be thrilled."

But that same night in the same state, 74-year-old Sen. Edward Markey, buttressed by progressive support, held off a challenge from Rep. Joe Kennedy III. The defeated 39-year-old member of the storied Kennedy political clan boasted support from establishment stalwarts like House Speaker Nancy Pelosi, D-Calif., to no avail.

“It’s not your age that counts — it’s the age of your ideas,” tweeted Rep. Alexandria Ocasio-Cortez, D-N.Y., 30, who backed Markey and whose unexpected 2018 primary win over a long-term incumbent established her as a progressive celebrity with clout. The two co-sponsored one of progressives' most prized proposals: Green New Deal legislation to curb emissions that help cause climate change.

But 2020 bore other progressive wins, too.

All three were endorsed by the grassroots group Justice Democrats, which boosted Ocasio-Cortez to her 2018 victory. Two other Justice Democrat candidates also made it to the November elections in districts in California and Nebraska.

Other liberal groups also claimed victories. Fifteen challengers backed by the Congressional Progressive Caucus, which boasts more than 100 members of Congress, advanced to the November general elections, though there was plenty of overlap between their endorsements and those of other organizations. That gives progressives shots at winning more seats in states including New Mexico, New York, Texas and Washington.

With the proportion of House incumbents losing primaries seldom topping 5% since World War II, progressives said this year's results have been strong.

“They're an effective and well-funded operation now," said Sean McElwee, who does polling and research for progressive Democrats.

In addition, all four members of the House's “Squad” of progressive women of color first elected in 2018 should all be back next year. Ocasio-Cortez and Reps. Rashida Tlaib of Michigan and Ilhan Omar of Minnesota won primaries, while Rep. Ayanna Pressley of Massachusetts didn't even face a challenge. All represent strongly Democratic districts.

Liberals argue that polls show why they're winning: wide support for their proposals to battle climate change, expand health care access and boost the minimum wage to $15 hourly.

“We really are where the general public is at," said Rep. Mark Pocan, D-Wis., co-chair of the progressive caucus.

They also see growing clout for progressives in Congress, especially if Biden defeats President Donald Trump in November. That would be a welcome change for progressives like Ocasio-Cortez who arrived eager to flex their muscles, leading to clashes with party leaders like Pelosi who tried keeping Democrats unified.

Waleed Shahid, Justice Democrats' spokesman, said progressive electoral victories mean “you might see other incumbents and leaders try to figure out how to earn the support of progressives instead of just trashing them."

With this year's progressive wins mostly in Democratic-held districts, moderates argue that those victories will do little to alter Democrats' power in the House, where they currently hold 232 of the 435 seats.

It's even possible there will be more moderates in the chamber next year. If Democrats increase their majority, it would likely be by defeating Republicans in closely divided districts where moderates have the best chances of winning.

“These districts are pragmatic, not anti-business districts," said Rep. Ami Bera, D-Calif., a leader of the chamber's moderate New Democrat Coalition, which also claims around 100 members.

Former Rep. Joseph Crowley, whom Ocasio-Cortez defeated in their 2018 primary, agreed that it's moderates who will wield the power in the House.

“The pathway to having won the majority in the House of Representatives was through moderates” who defeated Republicans, Crowley, who was part of the House Democratic leadership, said in an interview Wednesday. “Not Democrats replacing Democrats. So that's where the power of the majority lies.”