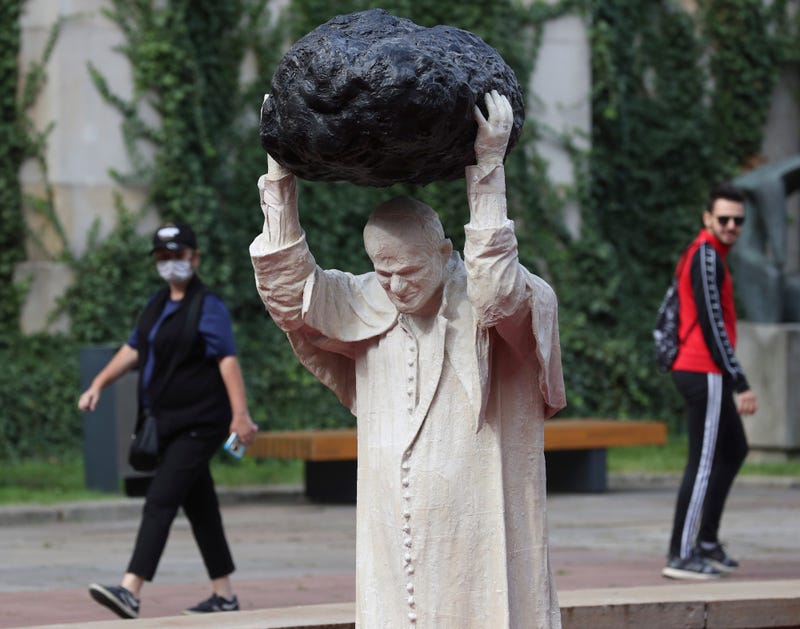 Photo credit Visitors to the National Museum walk past a new statue of the late pope, St. John Paul II, throwing a stone at a "Poisoned Well" just hours before its official inauguration in the museum yard in Warsaw, Poland, Thursday, Sept. 24, 2020. The sculpture by Poland's Jerzy Kalina is said to be a response to a controversial 1999 sculpture by Italian Maurizio Cattelan in which the Polish-born pontiff was shown as being crushed by a similar stone. (AP Photo/Czarek Sokolowski)
By The Associated Press

WARSAW, Poland (AP) — A new statue that depicts the late pope St. John Paul II throwing a rock into red water has provoked debate in his native Poland and revived memories of a 1999 Italian sculpture that showed him crushed under a rock, to which the new work was intended as a counter-statement.

The statue by Polish artist Jerzy Kalina, titled “Poisoned Well,” was inaugurated Thursday in front of Warsaw’s National Museum to mark 100 years since the much-loved pope's birth on May 18, 1920.

Kalina, 76, said the installation in the museum's fountain relates to John Paul II's efforts in the 1980s to help free Poland from communism, which is symbolized by the red color the water has from a red fabric placed on the fountain's bottom.

The artist, the creator of many works dealing with the Catholic faith and church, said he also wanted to send a “warning against multiplying forms of red revolution” and encourage the return to the “clear well.” He was apparently referring to the gradual disappearance of faith and religion in Poland.

But some critics associated the art work with blood and violence. The sculpture also drew ridicule on social media, with some commenters comparing the life-sized likeness of the canonized pope toting a rock to a cartoon figure.

The museum said the installation was Kalin's response to "La Nona Ora,” Italian artist Maurizio Cattelan’s sculpture that showed the pope as “feeble old man” pinned to the ground by a huge meteorite.

Cattelan's work, which was displayed in Warsaw in 2000, was seen as disrespectful and provoked a huge outcry.

Kalina said at the inauguration ceremony for his installation that he had been angry with himself for not responding to “Cattelan's provocation” sooner.

“But now I have opposed Cattelan's pope, crushed under a huge boulder, a helpless pope, with a figure of a strong pope, a strongman, who lifts the boulder over his head and is ready to hurl it into the waters of the poisoned well of a symbolic red hue,” Kalina said.

Kalina also created a monument to the victims of the 2010 plane crash in Smolensk, Russia, that killed Polish President Lech Kaczynski and 95 other people.

The 2018 black granite steps leading into the sky and symbolizing an airplane gangway were also at the center of heated controversy over their huge black form and location in Warsaw's prestigious downtown Pilsudski Square.

Born as Karol Wojtyla in the southern Polish city of Wadowice, John Paul II served as pope from October 1978 until his death in April 2005. Critics say that during his papacy, the church failed to bring priests who sexually abused children to account.

Recent documentaries in Poland describing stories of the victims have provoked a public debate and spurred the church into taking steps to protect children and to punish the perpetrators.