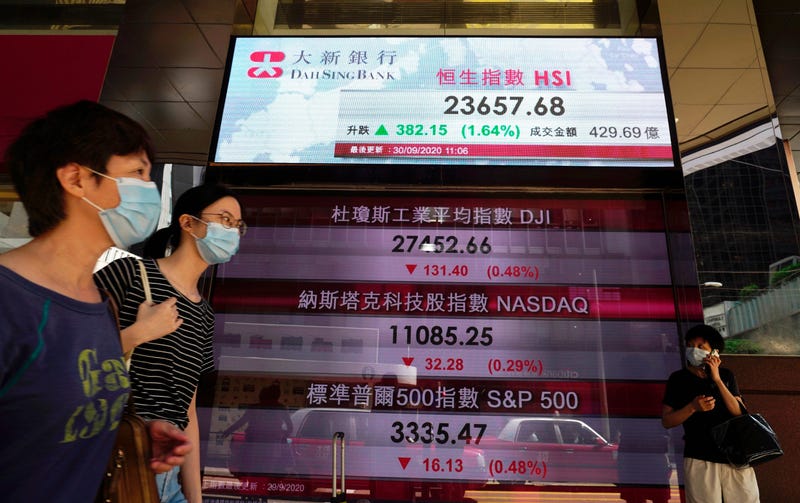 World stock markets and U.S. futures were mostly lower on Wednesday after the debate between U.S. President Donald Trump and his Democratic challenger Joe Biden.

There was scant sign the clash did much to sway investors. Shares fell in Paris, Frankfurt and Tokyo on Wednesday, while upbeat manufacturing data lifted shares in Hong Kong and Shanghai.

Investors remain cautious with COVID-19 infections on the rise again in the U.S. and elsewhere. The Trump-Biden debate occurred as coronavirus deaths worldwide have surpassed 1 million. Many millions of people worldwide are jobless.

A survey of Chinese manufacturers, t he Caixin manufacturing purchasing manager's index, showed economic activity accelerating further in September as businesses recovered from the downturn earlier this year due to the pandemic.

“The economic recovery has picked up pace with supply and both domestic as well as overseas demand improving," Stephen Innes of AxiCorp said in a commentary.

The debate's likely impact on markets, if any, was unclear. The atmosphere was antagonistic, as to be expected, but for voters still undecided about who’d better handle the multiple crises that have beset the nation, the faceoff may not have offered anything new.

“Markets have remained calm as no policy surprises have emerged from the debate so far," Jeffrey Halley of Oanda wrote in a report.

“My initial thoughts are the debate will not move the needle on the Democrat lead in the national polls," he said. “The real race this election, is for the U.S. Senate, and not the presidency, and whether the Republicans can block a Biden economic agenda, or whether the Democrats have a clear road ahead via control of both houses and the presidency."

Congress still is arguing over the size of a new economic support package after additional unemployment benefits expired. House Speaker Nancy Pelosi and Treasury Secretary Steven Mnuchin have agreed to hold another round of stimulus talks. However, with the death of Supreme Court Justice Ruth Bader Ginsburg, Congress has redirected much of its attention to President Trump's nominee to replace her.

The last major U.S. jobs report before the election will come out on Friday. It is a key indicator or how businesses are faring but also politically important for both GOP and Democratic messaging heading into the election. Economists expect 850,000 jobs were created in September, with an unemployment rate of 8.2%.

In energy markets, U.S. crude fell 25 cents to $39.04 per barrel in electronic trading on the New York Mercantile Exchange. Brent crude, the international standard, gave up 34 cents to $41.22 per barrel.