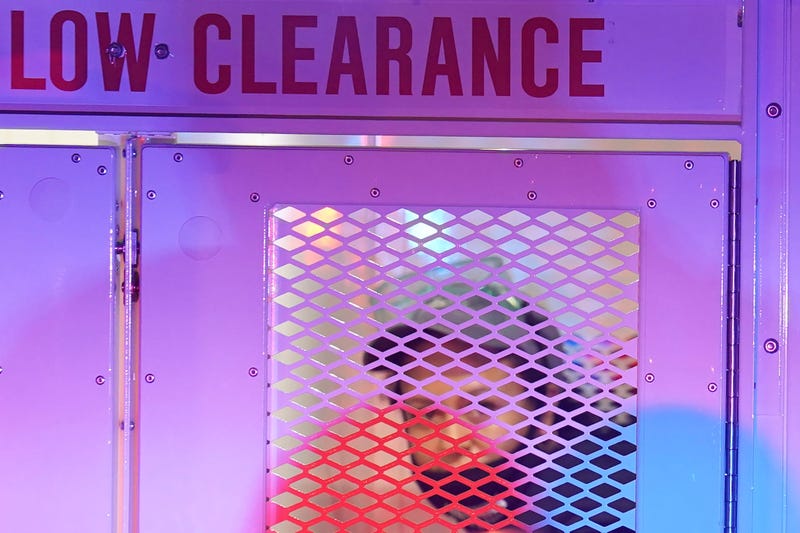 Photo credit A person sits in a police vehicle after being detained, Thursday, Sept. 24, 2020, in Louisville, Ky. Authorities pleaded for calm while activists vowed to fight on Thursday in Kentucky's largest city, where a gunman wounded two police officers during anguished protests following the decision not to charge officers for killing Breonna Taylor. (AP Photo/John Minchillo)
By The Associated Press

Activists say protests will continue until the Louisville police officers involved in the fatal shooting of Breonna Taylor have been charged.

The comments came at a Friday morning news conference during which family attorney Ben Crump also called for transcripts from the grand jury that decided not to charge any of the officers in Taylor's death.

Protesters have taken to the streets around the country after the grand jury announced its decision Wednesday.

A statement from Breonna Taylor's mother says her daughter was failed by a lack of investigation into her fatal shooting by Louisville police officers in March.

In a statement read by her sister at a Friday news conference, Tamika Palmer said she did not expect justice from Kentucky Attorney General Daniel Cameron.

Protesters have taken to the streets around the country after the grand jury announced Wednesday that no officers would be charged in Taylor’s shooting death.

A not guilty plea has been entered for a man charged with shooting and wounding two police officers in Louisville during protests over the death of Breonna Taylor.

Larynzo Johnson appeared in an orange jumpsuit Friday morning and only spoke when the judge asked if he understood the charges. He replied that he did.

Bond was set at $1 million and the judge appointed a public defender to represent Johnson at his next court date set for Oct. 5.

Protesters have taken to the streets around the country after the grand jury announced Wednesday that no officers would be charged in Taylor’s shooting death in March.

LOUISVILLE, Ky. — An attorney for the family of Breonna Taylor is calling for the Kentucky attorney general to release the transcripts from the grand jury that decided not to charge any of the officers involved in the Black woman’s death.

Speaking Friday in downtown Louisville, Ben Crump said the transcripts should be released so people can know if there was anyone who gave a voice to Taylor.

Protesters have taken to the streets around the country after the grand jury announced Wednesday that no officers would be charged in Taylor’s shooting death in March. Instead, the grand jury brought three counts of wanton endangerment against fired Officer Brett Hankison for shooting into Taylor’s neighbors’ home.

BUFFALO, N.Y. — A woman accused of striking a bicyclist with a pickup truck during a protest against racial injustice in downtown Buffalo, New York, was charged Friday.

According to a tweet from Buffalo police, 25-year-old Joanna Gollnau of Buffalo was charged with felony reckless endangerment and reckless driving for striking the bicyclist in Niagara Square during a protest Wednesday night, hours after a grand jury in Kentucky declined to charge Louisville police officers in the killing of Breonna Taylor.

The 59-year-old victim was hospitalized. The local bicyclist group Slow Roll Buffalo has identified her as board member Karen Huffman. The group said she was in stable condition.

Video of the incident shows the truck driving through the crowd and appearing to speed away. Police haven’t said whether they believe the crash was intentional, as some protesters have asserted.

Niagara Square was the scene of a protest earlier this year in which police officers pushed a 75-year-old man, who fell backward and hit his head on the pavement.

PORTLAND, Ore. -- Officials say protesters in Portland have set a fire at a police union building in Oregon’s largest city and that officers arrested 14 people.

Images posted online showed flames outside the doors of the Portland Police Association office. News outlets report the fire was quickly extinguished and police in a statement say the fire was set on plywood attached to the building’s front door.

Police say some protesters managed to get on the roof of the building.

The protest happened a day after several firebombs were hurled at Portland officers during a demonstration over a Kentucky grand jury’s decision to not indict officers in the fatal shooting of Breonna Taylor. Portland has had nearly four months of protests over racial injustice and police brutality.

LOUISVILLE, Ky. — A fire that erupted overnight at a four-story commercial building in downtown Louisville has been extinguished.

The Louisville Division of Fire said in a Facebook post early Friday that smoke and flames were coming from the boarded up building just after 1:30 a.m. Plywood had been placed over several doors and windows downtown ahead of the Kentucky attorney general's Wednesday announcement in the Breonna Taylor case.

It took about 70 firefighters around 30 minutes to put out the flames, the agency said. No injuries were reported.

The cause of the fire was under investigation. It did not appear to be tied to protests. Demonstrators had negotiated with police and largely dispersed just after 11 p.m. Thursday night.

LOUISVILLE, Ky. — At least 24 people have been arrested in Louisville during the second night of protests over a grand jury’s decision not to indict police officers on criminal charges directly related to the death of Breonna Taylor.

Louisville Metro Police said early Friday that the demonstrators were arrested before 1 a.m. on charges including unlawful assembly, failure to disperse and riot in the first degree.

Authorities alleged the protesters broke windows at a restaurant, damaged city buses, tried to set a fire and threw a flare into the street.

The agency also denied accusations that circulated on social media that officers were waiting for a decision from lawyers about whether they could “storm” a private church property where hundreds of protesters had gathered to avoid arrest after the city’s curfew went into effect.

The protesters disbanded around 11 p.m. Thursday after negotiating with police in riot gear, who also pulled back.

LOS ANGELES — Authorities say at least one person was hurt when a vehicle ran into a small crowd of people protesting police brutality in Los Angeles Thursday night.

About 30 minutes later, KCAL9 TV showed helicopter footage of a white sedan pushing slowly through a crowd of marchers blocking another intersection on Sunset.

A group of protesters in a black pickup truck chased down the white sedan and cut it off. They confronted the driver and banged on the sedan’s windows before the car drove away.

It wasn’t immediately known if anyone was hurt in the second incident.

There were no arrests. Los Angeles Police Officer J. Chavez says investigators are still gathering information about both incidents.

A few dozen demonstrators marched through Hollywood for hours on Thursday, one of many protests across the country demanding justice for Breonna Taylor. Demonstrators were angered after it was announced that the officers who shot the Black woman in her Louisville, Kentucky, apartment during a drug raid last March wouldn’t be charged for her death.

A protest has ended outside a Louisville church where demonstrators had rallied against a grand jury decision in the Breonna Taylor case.

Several dozen demonstrators left the First Unitarian Church around 11 p.m. Thursday after a negotiated end to a tense confrontation. Police who had gathered there with riot gear also pulled back.

Several arrests had been made earlier that evening at an intersection outside the church. But there appeared to be no police interference as the protest disbanded.

“I am not sad, I am angry,” she said, vowing to return downtown Friday to help her friends get out of jail.

The latest demonstrations erupted after the announcement Wednesday that no police officers had been directly charged in the fatal shooting of Taylor. The Black woman was killed during a police raid gone wrong in March.

ROCHESTER, N.Y. — Protesters in Rochester, New York, marched in the city Thursday night, chanting and singing “we want freedom” and calling for justice for the death of Breonna Taylor.

Hundreds of demonstrators marched to the city’s public safety building. Once they got there, protesters sat on the ground in front of the building and listened to speakers and songs. The speeches ended around 10:30 p.m. and a speaker with the group "Free the People Rochester," an organizer of the demonstration, dismissed the protesters from the scene.

Demonstrators were also calling for justice in the suffocation death of Daniel Prude, a Black man who died earlier this year after Rochester police placed a hood over his head and held him down.