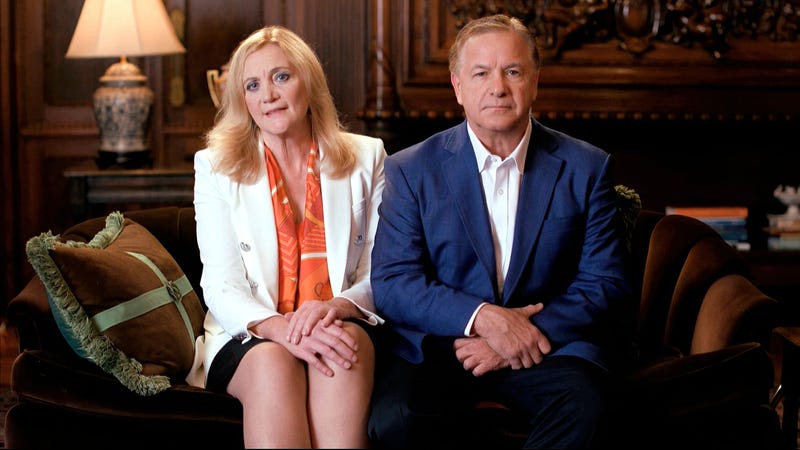 Mark and Patty McCloskey on Monday at the Republican National Convention reinforced the theme outlined in President Donald Trump’s campaign ads. The Republican is painting his opponent as complicit with rioting and violence that has taken place in some cities in recent months amid racial justice protests, the vast majority of which have been peaceful.

Patty McCloskey says, “They want to abolish the suburbs altogether by ending single-family home zoning." She says the actions “would bring crime, lawlessness and low-quality apartments into thriving suburban neighborhoods.”

She says, “These are the policies that are coming to a neighborhood near you,.” She adds, “Your family will not be safe in the radical Democrats’ America.”

HERE’S WHAT YOU NEED TO KNOW ABOUT MONDAY’S REPUBLICAN NATIONAL CONVENTION:

Parkland father Andrew Pollack says he believes the “safety of your kids depends” on whether President Donald Trump wins a second term.

Pollack’s 18-year-old daughter, Meadow, was killed in February 2018 at Marjory Stoneman Douglas High School in Florida. He spoke Monday at the Republican National Convention and credits Trump for forming a school safety commission that issued dozens of recommendations designed to make schools safer.

Pollack blames a culture of leniency that failed to hold the gunman accountable for many transgressions that occurred before the shooting, which killed 17 people. He says gun control laws didn’t fail his daughter, but people did.

Pollack blames the school for ignoring those warning signs. He also says “far-left Democrats” implemented a policy designed to reduce school suspensions that he says blames teachers for student failures.

During the opening night of Republicans’ convention Monday, state Rep. Vernon Jones said “all hell broke loose” when he announced his support for Trump. But Jones said he stands by his decision in part because Trump has backed initiatives including increased funding for HBCUs, criminal justice reform and “the most inclusive economy ever.“

Jones says, “The Democratic Party does not want Black people to leave the mental plantation” on which they’ve toiled. He added, “Black voices are becoming more woke and louder than ever.”

Earlier, former NFL star Herschel Walker said “it hurts my soul” to hear anyone refer to Trump as a racist, adding it’s “a personal insult that people would think I would have a 37-year friendship with a racist.”

Ohio congressman Jim Jordan is describing an empathetic moment he shared with President Donald Trump, part of an effort that aides said is aimed at presenting a side of the president many Americans don’t see.

At the Republican National Convention on Monday, Jordan recounted a phone conversation with Trump as the Ohioan was en route to visit his grieving family after Jordan’s nephew died in a car accident.

Jordan says he asked Trump if he’d like to say hello to the boy’s father.

Jordan adds: “For the next five minutes, family and friends sat in complete silence as the president of the United States took time to talk to a dad who was hurting. That’s the president I know.

Jordan’s story comes a week after nightly vignettes of Democratic presidential nominee Joe Biden’s connection with people who have lost spouses, children and jobs, part of an empathetic narrative the party built to contrast with Trump.

Republican National Committee Chair Ronna McDaniel is scoffing at Democrats’ choice of actor Eva Longoria to host one night of their convention, suggesting they couldn’t find a “real housewife.”

McDaniel dismissed Longoria, a star of “Desperate Housewives,” on Monday as a “famous Hollywood actress who played a housewife on TV.” McDaniel said, “I’m actually a real housewife and a mom from Michigan.”

It echoed a comment made by Trump last month when he warned “The Suburban Housewives of America” in a tweet that a Joe Biden presidency would “destroy your neighborhood.” He warned of an “invasion” and said he had scrapped a program to allow “low income housing” in the suburbs.

But McDaniel herself is an executive with a full-time job running a nationwide political organization with a multimillion-dollar budget.

The leader of the pro-Trump organization Turning Point USA is calling the president “the bodyguard of Western civilization.”

Kirk said at the start of the evening portion of the Republican National Convention on Monday that President Donald Trump had reclaimed the U.S. government “from the rotten cartel of insiders that have been destroying our country.”

He says, “We may not have realized it at the time, but this fact is now clear: Trump is the bodyguard of Western civilization.”

He added that Trump was “elected to defend and strengthen the American way of life.”

President Donald Trump will appear at the opening night of the Republican National Convention in a taped video with six former hostages freed during the Trump administration.

A campaign official said Monday that the former prisoners are among more than a dozen religious or other people whose release the Trump administration helped broker. They are Michael White, Sam Goodwin, Pastor Andrew Brunson, Joshua and Tamara Holt, and Pastor Bryan Nerran.

The convention is also set to feature a speech from the parents of Kayla Mueller, who died while a prisoner of the Islamic State group.

Trump has championed his hostage release program, which was led for years by now-national security adviser Robert O’Brien.

A forklift has damaged a brick walkway at the national monument Fort McHenry, where Republicans were building a stage for Vice President Mike Pence’s appearance for the party’s national convention.

A national parks advocacy group expressed outrage at the damage, saying stewardship of national monuments should be nonpartisan and professional.

National Park Service spokesperson Stephanie Roulett confirmed the damage in an email Monday. She says the damaged bricks dated from a 1930s restoration at the fort.

Built in 1798, Fort McHenry and the Americans in it successfully defended Baltimore Harbor from the British Navy in the War of 1812. The scene inspired Francis Scott Key to write “The Star-Spangled Banner.” The U.S. designates the fort as a national monument and historic shrine.

This month, the Maryland Republican Party asked for and got a special-use permit from the National Park Service to use the fort as a backdrop for Pence’s political address Wednesday during the Republican National Convention.

Republicans will have about 8,000 Roman candles, shells, comets and other fireworks ready to shoot into the sky around the Washington Monument on Thursday to celebrate President Donald Trump’s acceptance of the presidential nomination.

The National Park Service said Monday that it had approved the fireworks permit to mark the renomination of the president, who has demonstrated a fondness for big pyrotechnics and fetes at national monuments.

Mike Litterst, spokesperson for the National Park Service’s National Mall, said Monday that the service has received no permit requests so far for protests timed to the convention.

President Donald Trump says without evidence that the coronavirus is fading, a claim that he has been making for months.

In the toss-up state of North Carolina, Trump spoke on a tarmac in Fletcher to several hundred cheering supporters — the majority not wearing masks — after he addressed delegates at the Republican National Convention in Charlotte.

Trump says the nation will “put this horrible incident coming from China behind us and we will have the vaccines very soon, but it’s going to be fading, and it is starting to fade.”

The U.S. coronavirus death toll and case count have been climbing for months. More than 176,000 Americans have now died of the coronavirus, by far more than any other country.

Trump predicted positive third quarter results for the U.S. economy and said next year would be even better.

After brief remarks, Trump drove to Mills River, where he was to tour Flavor First Growers and Packers and speak at a Farmers to Families food box distribution program.

Along the motorcade route to Mills River, some people expressed their disapproval of Trump’s presidency. One man, wearing a mask, held a cloth banner that said: “Mr. Trump Spewing Lies. Spreading COVID.”

Trump told delegates at the Republican National Convention in Charlotte, North Carolina, on Monday that the only way Democrats can win is “if this is a rigged election.”

Until he won, Trump also warned that the 2016 election was going to be rigged.

He says Americans know how to keep themselves safe from the coronavirus and can go to the polls, eliminating the need to mail in their ballots. He said, without providing evidence, that that creates fraud.

Voter fraud has proved exceedingly rare. The Brennan Center for Justice in 2017 ranked the risk of ballot fraud at 0.00004% to 0.0009%, based on studies of past elections.

Trump says other votes will be “harvested” by people going door-to-door to collect ballots that voters have not submitted. In addition, he says some states are not verifying signatures on ballots. He did not provide evidence for those claims.

President Donald Trump is championing the stock market, telling delegates at the Republican National Convention that if he’s not reelected, the country will go in a “horrible direction.”

He said Monday that the upcoming presidential election is the most important in the history of the United States. He says, “Our country can go in a horrible direction or in an even greater direction."

He says the U.S. economy was humming along at high levels before the coronavirus pandemic. Trump condemned governors who are continuing to keep their states shut down to stem the spread of the virus.

It was a jab at his Democratic opponent, Joe Biden, who has said that further shutdowns are needed to battle the virus.

Pence told delegates at the Republican National Convention in North Carolina on Monday: “We’re going to make America great again — again.” He added that it will take at least four more years to “drain that swamp,” which is Washington.

Pence says the U.S. economy and law and order are on the ballot.

Pence says, "This is the moment for each of us to do everything in our power” to make sure Trump has four more years in the White House.

He says the choice between the former vice president and Trump has “never been clearer and the stakes have never been higher.”

President Donald Trump has been renominated as the GOP’s presidential candidate.

Republicans made it official during a scaled-back roll call vote on Monday at the Charlotte Convention Center in North Carolina.

Trump faces a difficult fight for reelection as he continues to deal with the fallout of the coronavirus pandemic, which has killed about 177,000 people in the United States, ravaged the economy and upended nearly all aspects of life. The president’s bid for a second term also continues to be shadowed by protests throughout the nation over police brutality and racial injustice.

Now that delegates have completed the task of formally renominating Trump, much of the remaining convention business will shift to the Washington, D.C., area. Trump is scheduled to deliver his acceptance speech from the White House South Lawn on Thursday evening.

Republicans have begun the process of formally nominating Donald Trump as the party’s 2020 presidential nominee.

The party has gathered 336 delegates for the roll call vote at a scaled-down convention kickoff in Charlotte, North Carolina, that begins a weeklong effort to convince the American people that he deserves a second term.

Despite the ongoing pandemic, delegates are holding an in-person roll-call vote at the Charlotte Convention Center. Democrats, who held their convention last week, chose to hold their roll call vote created a video montage from states across the country to avoid a large-scale gathering.

Trump is trying to avoid becoming the first incumbent president since George H.W. Bush to lose his reelection bid.

Flake was one of President Donald Trump's most consistent Republican critics in the Senate. He penned an Op Ed in The Washington Post in support of Trump’s impeachment.

Flake retired from the Senate at the end of his term in 2019, saying he was out of step with the Republican Party in the era of Trump. He later wrote a book, “Conscience of a Conservative,” that was a critique of Trump.