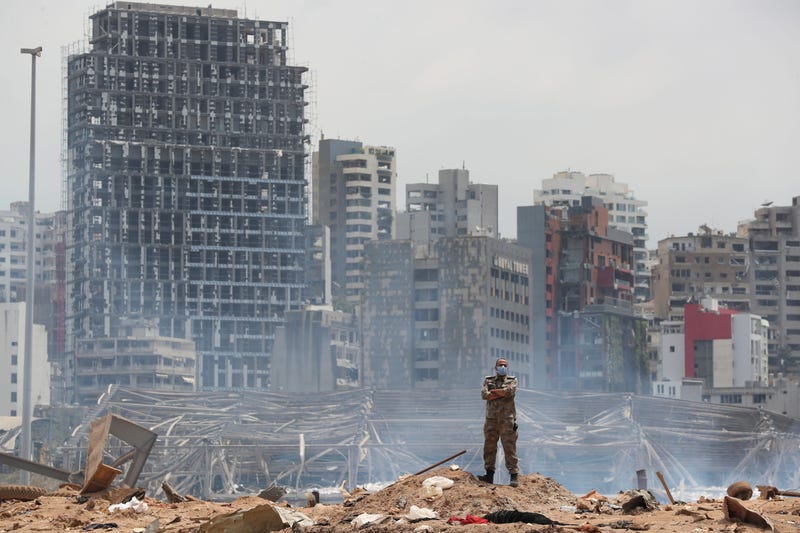 Photo credit A soldier stands at the devastated site of the explosion in the port of Beirut, Lebanon, Thursday, Aug. 6, 2020. French President Emmanuel Macron came in Beirut to offer French support to Lebanon after the deadly port blast. (AP Photo/Thibault Camus, Pool)
By The Associated Press

The United Nations says it is releasing $9 million to address immediate needs following the explosion that devastated Beirut and help strengthen operations in the city’s hospitals.

U.N. deputy spokesman Farhan Haq said on Thursday the money from the Lebanese Humanitarian Fund will be following by additional funds from the U.N.’s Central Emergency Response Fund.

He said the U.N. is carrying out assessments of the damage and needs resulting from the massive explosion and hopes to hold a meeting on Monday to inform the 193 U.N. member states of the results and launch an appeal to help Lebanon.

He says: “We’re trying to get the relevant figures ready as soon as we can.”

Haq said the World Health Organization reported that the blast left three hospitals unusable and two others with substantial damage and that “the equivalent of 500 hospital beds have been lost."

He said the initial $9 million will be used to expand and establish additional intensive care units where needed and provide trauma kits, ventilators, medical supplies and medicine.

WHO will help “cover 1,000 trauma interventions and 1,000 surgical interventions for people suffering from burns and wounds caused by glass and other debris resulting from the blast.”

Lebanese military investigators will begin questioning a former Cabinet minister and the head of the Beirut’s port over this week’s explosion that killed and wounded a large number of people in the capital.

A person familiar with the investigation said the questioning of Ghazi Aridi, who was public works minister in 2013 when the 2,750 tons of highly explosive ammonium nitrate arrived in the country, and Beirut port chief, Hassan Koraytem will take place on Friday.

The person spoke on condition of anonymity because he was not allowed to speak publicly about the investigation.

Also Thursday, a committee at the country’s central bank decided to freeze bank accounts of several figures, including Koraytem and the head of the customs department and his predecessor.

The announcement came a day after the government declared a two-week state of emergency and placed an unspecified number of officials under house arrest. Authorities said they will report findings into the blast that destroyed Beirut’s port and damaged large parts of the city within five days.

The managing director of the International Monetary Fund is calling for national unity in Lebanon and says it's time to overcome the impasse over necessary reforms that has so far scuttled talks with the lender of last resort.

IMF Managing Director Kristalina Georgieva said Thursday in the wake of the Beirut port explosion that the international community needs to step up help for the troubled country already mired in financial and economic problems.

Georgieva said the IMF is “exploring all possible ways” to support the people of Lebanon but that national unity will be required to overcome the disaster and the financial crisis.

Before the Tuesday explosion, Lebanon was buckling under the weight of a crippling economic and financial crisis that drove nearly half of the population into poverty and sent inflation soaring. The cash-strapped government started talks with the IMF in May which were marred by political divisions.

Georgieva said it is essential to overcome the impasse to put in place a program “to turn around the economy and build accountability and trust in the future of the country.”

The commander of a U.S. Department of Defense division with responsibility for the Middle East says the United States is willing to work with Lebanon’s armed forces in the aftermath of the explosion in Beirut.

The Central Command issued a statement saying McKenzie expressed a desire to work with the Lebanese Armed Forces, the U.S. Embassy in Beirut and the U.S. Agency for International Development “to identify and expedite support for Lebanon’s recovery effort.”

The call ended with the generals agreeing to keep in touch, according to the statement.

The head of Lebanon’s customs department says one of the country's main security agencies reported to the Cabinet in the past year about the danger from explosive chemicals being stored at the port.

Badri Daher told The Associated Press on Thursday that State Security had been investigating the stockpile of ammonium nitrate for the past year. He said it raised reports about the danger to the Cabinet, state prosecutor and other state institutions.

He confirmed that he sent a letter in 2017 to a judge in which he warned of the “dangers if the materials remain where they are, affecting the safety of (port) employees” and asked the judge for guidance.

Daher said he and his predecessor sent a total of six letters but never got a response.

French President Emmanuel Macron says an independent, transparent investigation into the massive explosion in Beirut is “owed to the victims and their families” by Lebanese authorities.

During a visit to the city on Thursday, Macron walked past gutted silos and charred carcasses of cargo containers.

Angry crowds approached him and the Beirut governor as they walked through a blast-torn street, and through a devastated pharmacy.

After meeting with political leaders later, the French leader mentioned the “anger in the street” he had witnessed earlier.

He said: “There is a political, moral, economic and financial crisis that has lasted several months, several years. This implies strong political responsibility.”

He said he discussed addressing corruption and other needed reforms with Lebanon's president and prime minister.

“I came here to show the support of the French nation for the Lebanese people,” Macron said, stressing the word “people.”

Media reports in the nation of Georgia say the tons of ammonium nitrate that exploded in Beirut originated from the Georgian city of Rustavi, home to a large chemical production plant.

The company that operates the plant issued a statement on Thursday that neither confirmed nor denied the provenance of the 2,750 tons of the chemical stored in a Beirut warehouse that is believed to have been touched off by a fire.

The ammonium nitrate — a highly explosive component of fertilizers — had been stored there since 2013 despite repeated warnings.

Rustavi Azot said it has been operating the plant “only for the past three years” and was unable to confirm whether the ammonium nitrate was produced in Georgia or in the city of Rustavi.

Cyprus’ foreign minister says a team of Cypriot doctors will travel to Lebanon Sunday to help treat the wounded from Tuesday’s blast in Beirut.

He said Cyprus will also dispatch additional rescuers and paramedics on top of the 10 emergency response personnel and eight sniffer dogs sent on Wednesday.

Christodoulides said private companies have responded to an appeal to provide quantities of aluminium and glass that Lebanon needs to rebuild.

Denmark is donating 12 million kroner ($1.9 million) to Lebanon, chiefly to be channeled via the Red Cross, and 600 chemical protection suits.

Development Minister Rasmus Prehn said Tuesday's explosions in Beirut come “at the worst possible time” for Lebanon. "The country’s economy and health care are already completely on their knees,” he said.

“And COVID-19 just makes the situation worse. At the same time, the country is home to 1.5 million refugees who also need support.”

So far this year, Denmark has provided 32 million kroner ($5.1 million) in humanitarian aid to Lebanon, mainly to help refugees in the Middle Eastern country.

Italy has sent 8.5 tons of medical equipment to Lebanon in a second aid flight following the massive explosion in Beirut.

The foreign ministry says the flight left from Brindisi on Thursday morning following a request from Lebanese authorities. On board were surgical and trauma kits. Earlier, a team of firefighters and experts in chemical and biological agents flew in to help.

In a statement, the foreign ministry said the Italian assistance “represents a new show of friendship and solidarity toward the Lebanese people and authorities.”

Two Jordanian Air Force military aircraft are flying to Lebanon carrying material for a field hospital that's expected to be set up within the next 24 hours in Beirut.

The military field hospital will be staffed by 160 medics and other staff and will include 45 beds, 10 intensive care beds and 2 surgery rooms.

Switzerland has sent a team of specialists including engineers and logistics experts to Lebanon to help with the aftermath of the explosion in Beirut.

The Alpine nation says it is responding to a request from Lebanese authorities.

The Swiss team, which also includes telecom engineers and a psychologist, will assist in securing the country’s damaged embassy and ambassadorial residence. Switzerland’s Foreign Ministry says the experts also will be available to examine the condition of Lebanon's public buildings such as schools and hospitals.

The Foreign Ministry says it has no indication that Swiss citizens were among the victims of Tuesday’s explosion.

China says it is sending a medical team and supplies to Lebanon in the aftermath of the port explosion that injured more than 5,000 people.

“As a friendly country to Lebanon, China is willing to continue to provide assistance within its capacity for Lebanon to tide over the difficulties,” Wang told reporters at a daily briefing.

China has long been a major customer for Middle Eastern oil and gas, and in recent years has sought to boost its influence in the area as an alternative to the U.S. and Europe. For many years, China has also contributed soldiers to the United Nations peacekeeping operation in southern Lebanon.

Germany’s foreign minister says an employee of the German Embassy in Beirut was killed in the huge blast that devastated the Lebanese capital earlier this week.

Heiko Maas says in a statement that the woman died as a result of “the consequences of the explosion in her apartment.” He has offered his condolences to embassy staff.

The embassy building was damaged in the blast.

Tuesday's explosion appeared to have been caused by an accidental fire that ignited a stockpile of ammonium nitrate at Beirut's port. It killed at least 135 people, injured more than 5,000 and caused widespread destruction.

Britain is sending a Royal Navy ship to Beirut to help the city recover from Tuesday's devastating port explosion.

Britain has pledged a 5 million pound ($6.6 million) humanitarian support package for Lebanon and says it will send search and rescue teams and expert medical support.

A French presidential official says French President Emmanuel Macron is arriving in Beirut following Tuesday's deadly port explosion and will be greeted by Lebanese President Michel Aoun. The official says Macron will go directly to the port and meet Lebanese and French teams in the disaster area.

The official spoke anonymously in accordance with the presidency’s practices.

Later in the day, Macron will head to the presidential palace for meetings with top officials. He will also meet with members of different political factions and civil society.

The French official says Macron’s trip is meant to show that Lebanon is not alone and to give the Lebanese people confidence. Macron has said his role is to show that he believes in the country.