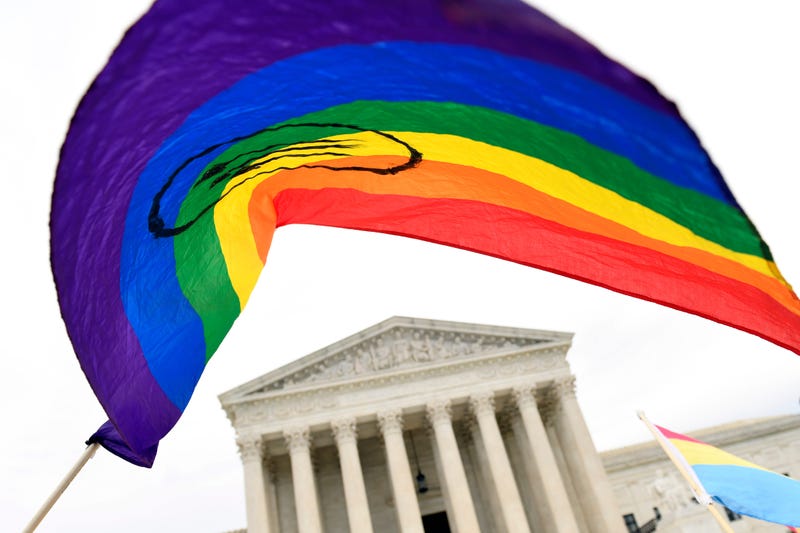 Photo credit FILE - In this Oct. 8, 2019, file photo, people gather outside the Supreme Court in Washington. A federal judge has blocked the Trump administration from enforcing a new regulation that would roll back health care protections for transgender people. The regulation from the federal Department of Health and Human Services was finalized days after the Supreme Court barred sex discrimination against LGBT individuals on the job. (AP Photo/Susan Walsh, File)
By The Associated Press

WASHINGTON (AP) — A federal judge blocked the Trump administration on Monday from enforcing a new regulation that would roll back health care protections for transgender people.

Finalized days after the Supreme Court barred sex discrimination against LGBT individuals on the job, the regulation from the federal Department of Health and Human Services was to have taken effect Tuesday.

Monday's preliminary injunction from U.S. District Court Judge Frederic Block in Brooklyn bars the administration from enforcing the regulation until the case can be heard in court and decided. Block indicated he thought the Trump administration's so-called transgender rule is invalid in light of the Supreme Court ruling in June on a case involving similar issues in the context of job discrimination.

“When the Supreme Court announces a major decision, it seems a sensible thing to pause and reflect on the decision’s impact,” Block wrote in his order, suggesting the agency may want to reconsider. “Since HHS has been unwilling to take that path voluntarily, the court now imposes it.”

The HHS health care rule was seen as a signal to President Donald Trump's social and religious conservative supporters that the administration remained squarely behind them after the shock of the Supreme Court's 6-3 decision, written by Justice Neil Gorsuch, who was nominated by Trump.

“An employer who fires an individual for being homosexual or transgender fires that person for traits or actions it would not have questioned in members of a different sex," Gorsuch wrote. “Sex plays a necessary and undisguisable role in the decision, exactly what (civil rights law) forbids.”

In a tweet, Trump called that “horrible & politically charged” and compared it to a shotgun blast in the faces of conservative Republicans.

The HHS rule sought to overturn Obama-era sex discrimination protections for transgender people in health care. Similar to the underlying issues in the job discrimination case before the Supreme Court, the health care rule rests on the idea that sex is determined by biology. The Obama-era version relied on a broader understanding shaped by a person’s inner sense of being male, female, neither or a combination.

The lawsuit against the Trump administration rule was brought by an advocacy group, the Human Rights Campaign, on behalf of two transgender women. One of the plaintiffs is an Army veteran, and the other a writer and activist.

Judge Block dismissed as “disingenuous” arguments from HHS that its rule was legally valid, and he wrote that the agency acted “arbitrarily and capriciously” in enacting it.

Block was nominated to the federal bench by former President Bill Clinton.