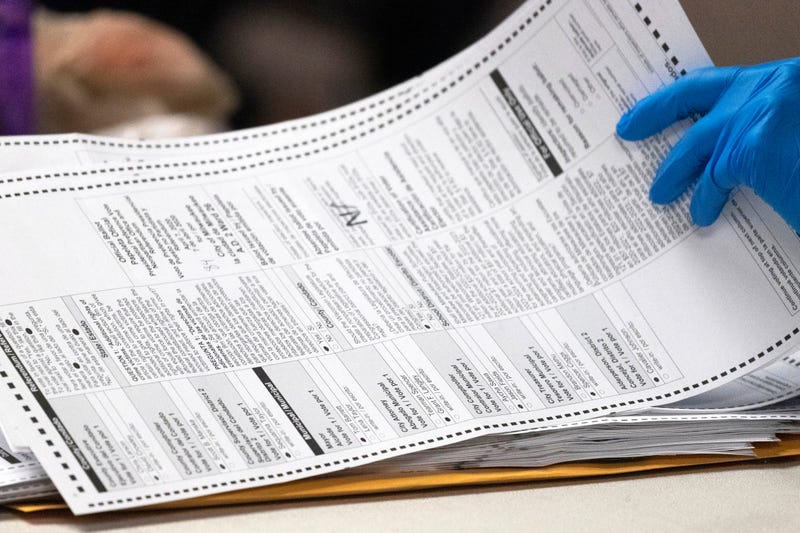 Photo credit FILE - In this April 8, 2020, file photo, a City of Milwaukee Election Commission worker processes absentee ballots for the state's primary election, in downtown Milwaukee, Wis. The Wisconsin Supreme Court is scheduled to hear arguments in a case that could result in the purging of about 130,000 people from voter rolls in the hotly contested battleground state. The arguments Tuesday, Sept. 29, 2020, come just five weeks before the election in one of several closely watched lawsuits in Wisconsin. (Mark Hoffman/Milwaukee Journal-Sentinel via AP, File)
By The Associated Press

MADISON, Wis. (AP) — Wisconsin's Democratic attorney general argued before the state Supreme Court on Tuesday in opposition to purging 130,000 people from voter rolls in the hotly contested presidential battleground. The attorney for a conservative group said state law requires it and the voters should have been removed months ago.

The Wisconsin case is one of several lawsuits across the country, many in battleground states, that seek to purge voters from registration rolls. It is being closely watched because President Donald Trump won the swing state by fewer than 23,000 votes in 2016. However, the lawsuit was unlikely to be resolved by the state Supreme Court before the Nov. 3 election just five weeks away.

The Wisconsin case hinges on whether voters who were identified as potentially having moved should be removed from the voter registration database. The Wisconsin Institute for Law and Liberty, a conservative law firm, argued that the state elections commission broke the law when it did not remove voters from the rolls who did not respond within 30 days to a mailing last year indicating they had been identified as someone who potentially moved.

The commission wanted to wait until after the presidential election before removing anyone because of inaccuracies found while previously attempting to identify voters who may have moved.

Because voters who moved were concentrated in more Democratic areas of the state, liberals argued that the lawsuit was meant to lower turnout on their side. Republicans countered that it was about reducing the likelihood of voter fraud and making sure that people who moved are not able to vote from their previous addresses.

A circuit court judge ruled last year that the voters must be removed immediately, but a state appeals court overturned that in February.

Many of the questions from justices on Tuesday revolved around whether it was the duty of the state elections commission, or local election clerks, to remove voters from the rolls. Justice Brian Hagedorn, part of the court's 4-3 conservative majority who has sometimes sided with liberals, questioned whether the state elections commission had the legal authority to remove anyone from the registration list.

Wisconsin Attorney General Josh Kaul maintained that the elections commission was under no duty to treat as reliable the information it received about voters who may have moved. Kaul said the commission's only responsibility under the multi-state Electronic Registration Information Center agreement was to notify flagged voters that they may need to update their address.

Rick Esenberg, attorney for the conservative group that brought the lawsuit, argued that state law clearly gives the elections commission the responsibility to maintain the voter list. When presented with the information about those who had moved, the commission had a duty to remove those who did not respond to the mailing, Esenberg said.

No voters have been deactivated while the yearlong legal fight continues. Even if a voter has their registration deactivated, they can register again later or on Election Day when they show up at the polls. Absentee voting is underway in Wisconsin with more than 238,00 ballots returned already.

The lawsuit is just one of several voting-related challenges across the country, many of them in battleground states.

On Sunday, a federal appeals court temporarily put on hold a ruling that would expand the time that absentee ballots can be counted in Wisconsin. And on Monday, a judge in Georgia dismissed a similar voter purge lawsuit filed by two voters in Fulton County, which includes Atlanta. The lawsuit sought to force election officials to hold hearings that could have resulted in 14,000 voters being removed from the county’s voter rolls before the November general election.

In Pennsylvania, a federal lawsuit filed by the conservative group Judicial Watch alleges that up to 800,000 registered voters should be classified as “inactive” and removed. That case is on hold until after the election. Judicial Watch also sued in North Carolina, saying not enough has been done to periodically remove inactive or permanently moved voters in that state.

And in Michigan, a Republican activist sued in federal court to remove ineligible voters from 16 counties with “abnormally high” registration levels. The state recently sought to dismiss the lawsuit, saying the plaintiff had no standing to sue and, even if he did, federal law prohibits the systemic removal of ineligible voters within 90 days of the election. That case is pending.

Removals or proposed removals, especially this close to an election, can be confusing and intimidating for voters and frequently aren’t based on reliable information, said John Powers, an attorney with the Lawyers’ Committee for Civil Rights, which has been fighting those efforts.

“You’re scaring people and kicking eligible voters off the rolls, all of which undermines confidence in elections at time when that’s the last thing we need,” he said.