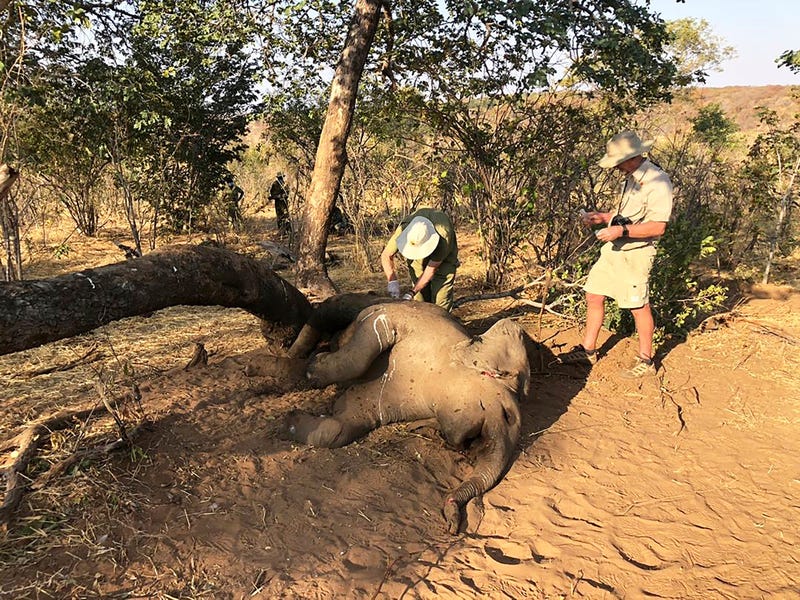 Photo credit Wildlife vets take samples from dead elephants found in Hwange National park, Zimbabwe, Saturday, Aug. 29, 2020. A spokesman for Zimbabwe's national parks said on Wednesday, Sept. 2 the number of elephants dying in the country's west from a suspected bacterial infection, possibly from eating poisonous plants, has risen to 22 and more deaths are expected. (AP Photo)
By The Associated Press

HARARE, Zimbabwe (AP) — Parks authorities in Zimbabwe said Monday that the recent deaths of elephants have been caused by a bacterial disease that has previously affected elephants in Asia and other animals in southern Africa, although more tests will still be carried out.

Fulton Mangwanya, the director-general of the Zimbabwe Parks and Wildlife Management Authority, told a parliamentary committee that 34 elephants have died so far and “many” more could still die “in the short term.”

“All results to date point to the cause of these elephant deaths being a disease known as hemorrhagic septicemia,” said Mangwanya, noting that the disease does not appear to have been previously recorded as causing deaths among Africa’s savannah elephants.

“However, it has been reported to kill Asian elephants in India. It has also affected cattle, pigs, and chickens in southern Africa in which it can cause massive mortality. It has also been recognized in buffalo and some other wildlife species in this part of this world,” he said.

He said the disease “may have been around in elephants in this region for some time,” pointing to specimens from two dead elephants from the vast Hwange National Park in 2019 that showed “the same microscopic pathology,” although a definitive diagnosis could not be made at that time.

Most of the elephants that died recently in the Pandamasue Forest, located between Hwange National Park and Victoria Falls, were weak or young, mostly under 15 years old.

The dead elephants were found with their tusks still on their bodies, ruling out poaching. In recent years poachers in Zimbabwe have poisoned dozens of elephants with cyanide and then have taken their ivory tusks to sell them to illegal traders.

The parks authorities also said toxic water was an unlikely cause because the country has been pumping “clean water” from wells during this dry season.

Not enough information is known about the disease’s effect on local elephants to predict a long-term outcome, he said.

“It is unlikely that this disease alone will have any serious overall impact,” on the survival of the southern African country’s booming elephant population, said Mangwanya.

“Yes they die, but honestly this is just nothing, a drop in the ocean because we have over 84,000 elephants in Zimbabwe, which is overpopulation already,” he said. “But this is a disease that we should work seriously to make sure that we unearth and identify properly so that corrective measures are taken,” said Mangwanya.

In neighboring Botswana, home to the world’s largest population of the pachyderms, the government last week said the sudden deaths of some 330 elephants in the northwestern region of the country earlier this year may have occurred because they drank water contaminated by toxic blue-green algae.

Mangwanya said the recent elephant deaths in Zimbabwe also showed that the animals experienced “extremely sudden death,” and that Botswana might need to conduct tests to find out if it’s not the same bacterial infection being experienced in Zimbabwe.

music
Jimmy Eat World's Jim Adkins on streaming shows, playing Tom DeLonge's wedding, and more
music
Kate Hudson says estrangement is 'unfortunately quite common' amid talk of her own father
music
Looking back on the surfing days of Bruce Springsteen
music
Everything we know about Eric Church's triple album
sports
Deion Sanders didn't show up to draft meetings with Lions because he didn't want to go to Detroit
sports
Patrick Mahomes on idea he is chasing Tom Brady: 'It's going to be hard to do'