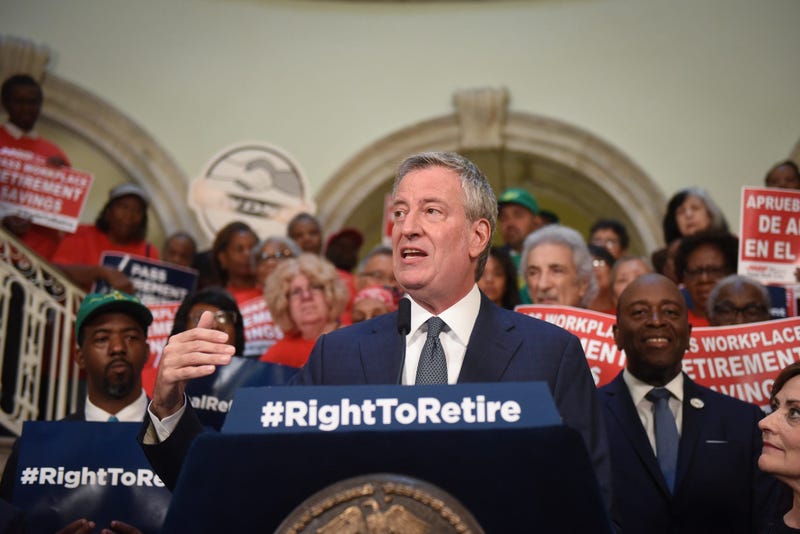 NEW YORK (WCBS 880) — Nearly 2 million New Yorkers would be automatically enrolled in a retirement savings plan under a new proposal before the City Council.

As WCBS 880’s Rich Lamb reports, about 1.5 million private sector employees do not have access to a retirement savings program through their workplace.

The Universal Retirement Security bill, which has the support of Mayor Bill de Blasio would change that.

“Over a million New Yorkers work their whole lives and have nothing to show for it,” Mayor de Blasio said in a statement. “Rather than work until the day they die, Universal Retirement Security will allow more New Yorkers to breathe a sigh of relief later in life and truly enjoy the years they’ve earned.”

Co-sponsor of the legislation, Councilman Ben Kallos, explained that companies would not contribute to the Universal Retirement Savings Program and stressed that it would cost employers nothing.

“Auto-enrollment of the employees would be mandatory through payroll reduction through employers with ten or more employees who have not offered a retirement savings plan for the past two years,” the councilman said. “Employees over the 21 years of age, who have worked more than 20 hours a week, would be auto-enrolled with a default contribution rate of three percent.”

Employees would be able to transfer the savings account from job to job and, consistent with ERISA eligibility, part-time workers who work at least 20 hours per week would also be covered.

Kallos notes that employees would be able to opt out if they didn't want the three percent deducted from their paychecks.

The bill has also gained the support of local congressional leaders.

“The American people deserve peace of mind and to know their hard earned benefits will be available when they need them. Sadly, too many New Yorkers suffer from retirement insecurity. I’m thankful that the City has introduced a plan to curb this problem and help more New Yorkers retire with dignity,” said Congresswoman Carolyn Maloney.

Businesses that have already have a retirement program would not be able to drop their current plan to enroll in the one created by New York City.