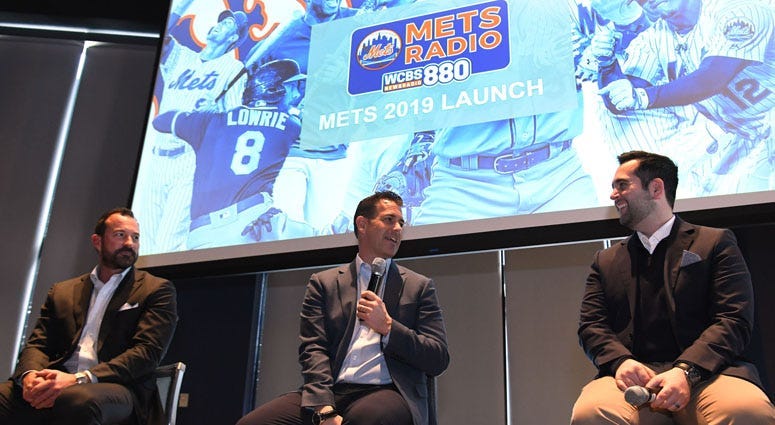 NEW YORK (WCBS 880) — What does the 2019 season hold for New York Met fans? Plenty! If you listen to the team's new General Manager Brodie Van Wagenen and Manager Mickey Callaway. The two men were the featured guests at the WCBS 880 Mets Radio Kickoff at Citi Field Friday.

Both sat for a Q+A session with Mets broadcaster Wayne Randazzo who will share the booth with veteran Howie Rose.

With his rookie season under his belt and additions to the coaching staff who can bring some extra experience on game day, Callaway says the team is ready.

"Having that experience of going through it, the high times, the low times – which, we had plenty of both – and just being able to go to the field every day and kind of knowing what to expect. You know, for a first time Major League Baseball player, to a first time pitching coach, to a first time manager, those experiences are invaluable and I think we were able to draw on some of those experiences and maybe change the coaching staff a little bit so we can be better prepared every single day," Callaway said Friday. "We're gonna be improved just like everybody should be after a little more experience and we're looking forward to it."

"We're just trying to surround ourselves with the best possible people and if we can do that, we're going to be the best we can possibly be. So that's our goal," Van Wagenen said. "I think that we feel really good about how the team has shaped up. We haven't been shy about saying that we think our team is good, we think our team can compete and we fully expect to do so."

Randazzo asked Van Wagenen if he would change his approach for the rest of the off-season if Bryce Harper or Manny Machado land in the National League East outside of New York.

"No not at all, I think as we've built the team we haven't consumed ourselves with what others would do. We had our plan, we knew we had to get better – not just in one area, but in a variety of other spots – and we're not going to be afraid for what our competition can do and we fully expect the other teams in the division to get better and we're perfectly comfortable with that," Van Wagenen said. 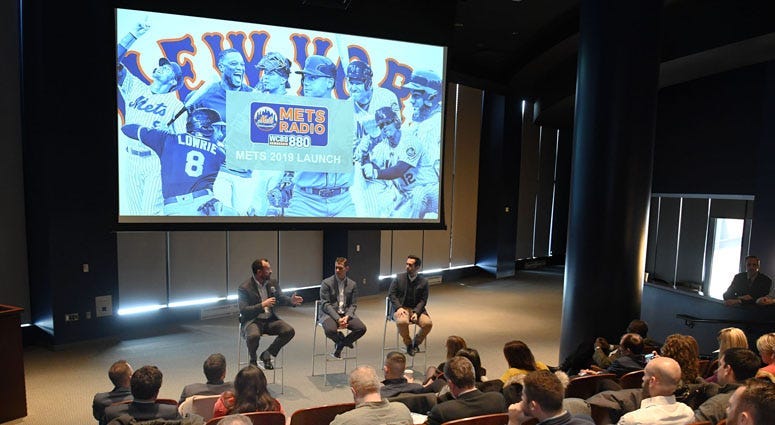 They were also asked about where Jeff McNeil will fit in this season after the additions of so many established veteran players, such as Jed Lowrie.

"We were criticized for not having enough depth on the roster and all of us have seen over the last few years is when one of our front-line guys went down we just didn't have another Major League-caliber player to replace that person, let alone an All Star-caliber player to replace him. A lot of people say we have too many good players. We have too many good infielders and we think that's a good problem to have," Van Wagenen said. "We've really made a commitment to try to develop Jeff McNeil."

Callaway again stressed the importance of having that depth saying: "I think that inevitably people get injured and we do everything we possibly can to keep that from happening but, we added depth so when that happens, somebody that is very good can step in and we won't really lose as much as we might have in the past. That in itself is going to get some playing time for Jeff McNeil. When you have really good players, you can find places to get them."

The two also touched on some burning questions Mets fans may have including: What's the plan for Peter Alonso in Flushing? When can we expect to see Yoenis Cespedes back on the field? And what we can expect from the team's other most-talked about minor leaguer, Tim Tebow?

"We really like what Peter Alonso did last year... he's going to have every opportunity to make the club," Van Wagenen said. "The goal here is to put the best players out there.... I'm a players guy, I want players to feel like they have the ambition and the ability that if they perform their best they're going to get rewarded for that performance and if that's Opening Day or if that's the All Star break or, shoot, if it's next year we want players to earn it and when they do we want to reward them for it."

As far as the best case scenario for Cespedes this season, he said, "We're confident that the rehab is going well, we know the surgeries went well and there's every reason to be optimistic that he's going to make a contribution for us at some point this season and I think we'd all be pretty darn happy if it happened at the trade deadline, similar to what happened in 2015."

The Mets moving their AAA franchise affiliation to Syracuse from Las Vegas also adds to the team's flexibility.

"Having Syracuse not only a New York team and being able to have more Mets fans see our Minor League players that are going to be up here contributing to the big leagues, but to have them so close that we can grab a guy when we need to is a huge advantage for us," Callaway said.

So, how do the Mets compare themselves to the competition in their division?

"That's the kind of division you want, you want a division where you have to put it out there on the line every day and being in New York you have to do that anyway but when you can play those teams in your division that are really good the whole time, look, our ultimate goal is to win a World Championship, not just to get to the playoffs... we want to win the trophy and to do that you have to play the best," Callaway said. "By playing the best every week, you're going to get better and better and that's what our players need."

Van Wagenen said the key is for players to believe in themselves.

"I think that's what's going to matter the most. We've said this a lot, if we don't believe we can win how are we going to beat someone else?"

Pitchers and Catchers report to Spring Training in Post St. Lucie February 12th, the first broadcast on WCBS 880 will be Saturday February 23rd at 1pm when the Mets host the Atlanta Braves in Florida.