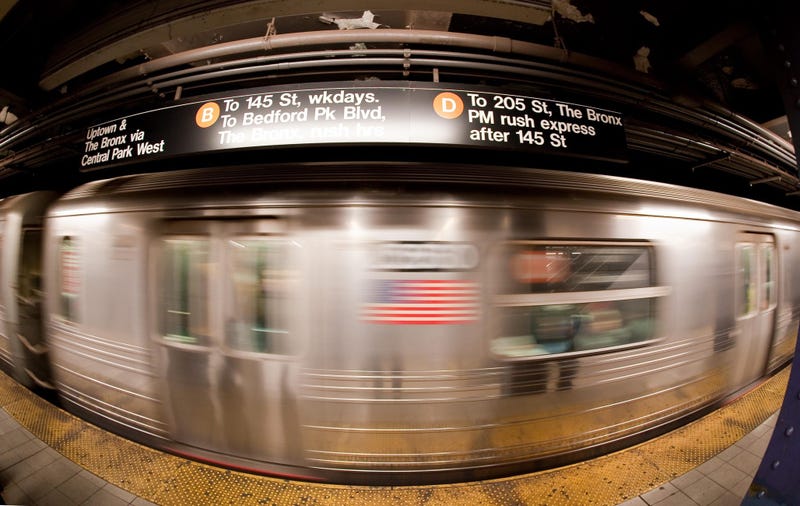 NEW YORK (WCBS 880) -- Mayor Bill de Blasio and Gov. Andrew Cuomo have come up with a 10-point plan to fix and fund the troubled MTA.

The joint plan includes a congestion pricing proposal that would set up electronic tolling devices for cars entering Manhattan south of 61st Street. The money collected would solely be used to fund the MTA.

De Blasio said he still believes a Millionaires Tax is best, but "the time to act is running out, and among all alternatives, congestion pricing has the greatest prospects for immediate success."

“Working New Yorkers struggle every day to get around our city. We cannot let another year pass without action that makes people’s lives easier," the mayor said in a statement.  "This crisis runs deeper than ever before, and it’s now clear there is no way to address it without congestion pricing and other dedicated revenue streams. The time to act is now."

During an appearance on WNYC's "The Brian Lehrer Show" on Tuesday, Cuomo said, "Congestion pricing is an idea whose time has come. We've talked about it for years, we've tried to get it done for years and I believe this is the year to actually get it done."

The proposal has support from Uber which said in a statement, "Uber stands behind Governor Cuomo and Mayor de Blasio's push for congestion pricing, and we urge the legislature to follow their lead and pass comprehensive congestion pricing. We believe that all users of Manhattan’s congested roads - whether it’s a personal vehicle, delivery truck, taxi or Uber -  should pay their fair share to keep New York City moving forward."

Under the plan, unveiled Tuesday, the MTA would also get extra cash from internet tax sales as well as pot sales, if recreational marijuana is legalized in the state.

Other proposals include consolidating the six entities that make up the MTA, restructuring the board, and establishing a state and city partnership to combat fare evasion.

The plan also calls for an independent audit of the transit agency.

The proposal must be approved by state lawmakers.

"This proposal is a holistic cure for much of what ails the MTA, and I hope to see it enacted swiftly for the benefit of our 8.5 million daily customers," he said in a statement.

Here is the full plan as laid out in a press release from the mayor's and governor's offices:

1.MTA will develop a reorganization plan to make the agency more efficient and effective. The antiquated structure will be fundamentally changed to centralize common functions among the 6 existing entities. Currently – NYCTA, LIRR, Metro-North, MTA Capital Construction, MTA Bus, SI Railway – operate as 6 separate entities.  This 1968-designed “holding company” structure makes coordination more difficult and expensive. All common functions such as construction management, legal, engineering, procurement, human resources, advertising etc. will be consolidated and streamlined in a central operation. The individual divisions will focus on day-to-day management of their primary operation. The restructuring plan will be completed by June of this year. The restructuring plan must be coupled with a change in culture, which will generate fresh ideas and new perspective from new and recently appointed senior and mid-level management recruited from the private sector and other cities and states.

2.The MTA Transformation Plan would include a congestion pricing financing model.  Electronic tolling devices would be installed on the perimeter of the Central Business District (CBD) defined as streets south of 61st St. in Manhattan.  The FDR Drive will not be included in the Central Business District.  The electronic tolling system will account for tolls previously paid by drivers entering Manhattan from designated crossings. The system will be installed and operated pursuant to an MOU between the City of New York and the MTA for the purposes of ensuring the timely completion of the installation of congestion infrastructure in order to effectuate a congestion pricing plan, and recognizing the expertise of the TBTA for purposes of running and operating cashless tolling systems and City agencies for purposes of the use and impact of infrastructure installation on City streets.  Tolls would be variable providing discounts for off-peak hour travel.   Emergency vehicles will be exempt from congestion pricing tolls. Other exemptions or discounts will be provided to a limited group of vehicles entering the CBD including vehicles operated by or transporting people with disabilities and individuals who have an identifiable hardship or limited ability to access medical facilities in the CBD. Congestion pricing tolls would be supplemented with State and City revenue from a fixed amount of the new internet sales tax derived from sales in New York City, with a growth factor, and a percentage of the State and City revenue from the cannabis excise tax.  Congestion pricing revenue and these two taxes will be placed in a ‘lockbox’ to provide a funding source necessary to ensure the capital needs of the MTA can be met, with priority given to the subway system, new signaling, new subway cars, track and car repair, accessibility, buses and bus system improvements and further investments in expanding transit availability to areas in the outer boroughs that have limited mass transit options.  Tolls will be set once the electronic infrastructure is in place and a Capital Plan is finalized but will in no event be set later than December 2020.

3.The MTA fares for public mass transportation must be controlled in future years through cost containment actions and improved management. The MTA should be able to operate with mass transit fare increases limited to inflationary increases of 2% per year.

4.All MTA Board appointments will be modified so that all terms end with the appointing elected official’s tenure.

5.Partnership between the State and City is necessary to combat fare evasion.  We cannot have a voluntary fare system and still maintain a system that ensures operational stability.  The State will work with the MTA, City and District Attorneys to develop an enforcement strategy, with both personnel and station design modifications that do not criminalize fare evasion but instead prevent fare evasion, sanction violators and increase enforcement.

6.The MTA will undergo an independent audit to determine their actual assets and liabilities.  The initial audit should be completed no later than January of 2020. The forecasts, projections and capital plans they have put forth strain financial credibility.

7.The Capital Plan shall be reviewed by a committee of transportation, engineering and government experts who have no existing financial relationship with the MTA (The Regional Transit Committee, “RTC”).  The Committee will have appointees by the Governor, Mayor, State Assembly and Senate, and organizations representing subway riders and driving commuters.  The RTC will also review the toll and fare increases proposed by the MTA as necessary to fund the Capital Plan.

8.The MTA will have all major construction projects and planned projects pursued as “design build.”  The MTA will do preliminary drawings only to the point necessary for bidding the project in a private sector competition based primarily on cost and timing of the project.  Selections will be made with incentives and sanctions for performance.  All major construction projects will be reviewed by construction and engineering experts who are not affiliated with the MTA or its consultants.  The construction review team will be headed by the Deans of Cornell School of Engineering and Columbia School of Engineering to assure state of the art design and technology is being deployed.  This group will also review the plans for signal system upgrade methodology and decide the best system to use, specifically comparing Communications Based Train Control (CBTC) to Ultra-Wide-Band (UWB) technology for safety, timeliness and cost.  The MTA will be more aggressive in debarring failed contractors.

10.The Governor and Mayor will work closely with the Legislature to effectuate provisions in this framework.