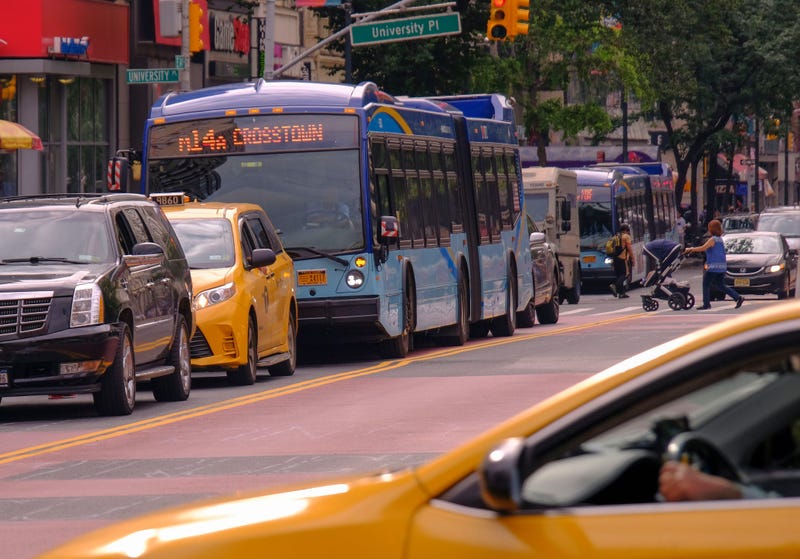 NEW YORK (WCBS 880) — A judge on Tuesday lifted a temporary injunction against the city’s plan to ban vehicle traffic on a section of 14th Street in Lower Manhattan.

The Department of Transportation had planned to ban most cars from the street between Third and Ninth avenues beginning on July 1 in order to speed up travel times on the M14 bus.

A Supreme Court judge blocked the plan in late June, saying the DOT needed to conduct an environmental review after residents filed a lawsuit to stop the plan.

Drivers also filed a lawsuit saying it’s unfair to ban cars from the roadway in order to improve travel times for city buses. However, their arguments faced significant backlash from bus riders, who filed papers Monday encouraging the city to put its plan in motion right away.

The bus riders had the support of Mayor Bill de Blasio behind them, who wanted the plan initiated to provide a faster commute for those taking the bus while the L train undergoes repairs.

"We prevailed in our legal fight to speed up buses on 14th Street! With this hurdle clear, NYC Department of Transportation is moving ahead with final roadwork so we can get New Yorkers moving on one of the city’s busiest thoroughfares," Mayor de Blasio wrote on Twitter.

JUST IN: We prevailed in our legal fight to speed up buses on 14th Street! With this hurdle clear, @NYC_DOT is moving ahead with final roadwork so we can get New Yorkers moving on one of the city’s busiest thoroughfares.

Let’s get this DONE!

According to Danny Pearlstein, head of the Riders Alliance, the M14 was barely faster than a walking pace and the change was desperately needed.

“Tens of thousands of riders on 14th street are going to be saving a lot of time,” he said now that a judge has approved the plan.

Beginning on Aug. 12, almost all car traffic will be limited on 14th Street in Lower Manhattan. Local pickups and drop offs will still be allowed, but drivers will need to turn off as soon as possible.

Though many are worries about the spillover traffic the limitations will cause, Pearlstein says it will be good for the city an hopefully will be an incentive for people to ditch their cars for public transportation.

He adds that with the change, "The bus is going to be more reliable and quicker."