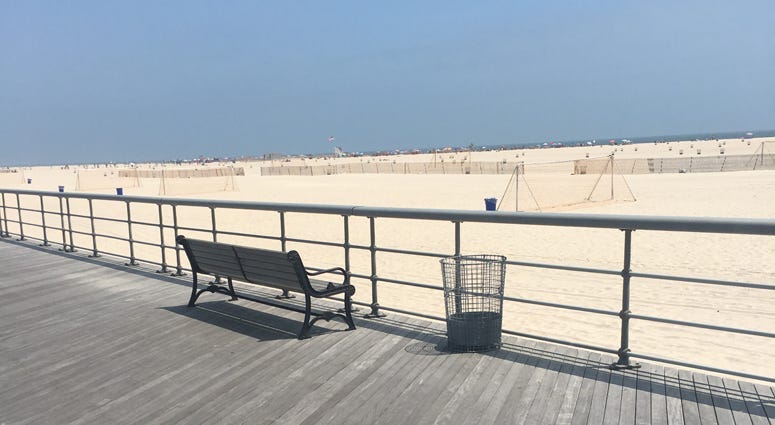 NEW YORK (WCBS 880) -- With a heat dome settling over region, New Yorkers are doing whatever they can to escape the sizzle.

Many fisherman on City Island sought respite from the scorching temps on land out on the open water.

"We want to get a nice cool morning of fishing in. Probably a half a day. Pick up a couple of blue fish and stripers and then head back home early," said Joe Cunningham, who went out Friday morning with his son.

"I'm gonna be fishing like two hours and then go home. Gotta be in AC all day," said Mario, who also got an early start on City Island. Then he'll cook, or rather prepare food. "I gotta make some kind of salads. Cold food," he said, adding  Don't want to put the stove on. You're gonna heat the house."

Stu Berman will keep cool while fishing on the Long Island Sound. He bought his bait on City Island and he'll take the Snow Goose boat out of Port Chester.

BEAT THE HEAT: Summer Survival Guide | Things To Do This Weekend

"If you have a breeze it could probably be five to 10 degrees cooler, but believe me when you come back in and you get to the dock you feel as if it's 25 degrees hotter," Berman said. "First of all your car is in the parking lot, even though the windows are cracked you still feel it."

If you're not lucky enough to get out onto a boat, New York City beaches will be open until 7 p.m. and public pools until 8 p.m. To take the strain off the power grid, Mayor Bill de Blasio has ordered all tall office buildings to keep the thermostat at 78 degrees and 500 cooling centers are open across the five boroughs.

Out on Long Island, children sought relief at a spray park in Elwood. Others cooled off at the indoor ice rink in Dix Hills.

Jones Beach was also a popular spot to beat the heat. It can be up to 10 degrees cooler than non-beach areas of Long Island and the water temperature will be in the 70s for the weekend.

State Parks Regional Director George Gorman said if anyone falls ill because of the heat the beaches are fully staffed and EMTs are available.

"We're telling everybody make sure you eat, make sure you bring plenty to drink. We have water bottle filling stations, we have water fountains, so we have plenty of areas where you can get refreshments," Gorman said.

Lifeguards will be on duty until 8 p.m. at most Long Island state parks, Gorman said.

A sand soccer tournament and volleyball tournament will continue as planned at Jones Beach this weekend.

Town of Huntington Supervisor Chad Lupinacci says it's so important to do everything possible to stay cool this weekend.

"If you're not used doing yard work and you haven't done it all summer, this is probably not the weekend to do it," he said. "Drink lots of water and not a lot of coffee and tea as they can dehydrate you."

As for pets, Suffolk County SPCA Chief Roy Gross said never leave an animal in a car even if the window is cracked open. Gross said on an 80-degree day, temperatures in a car can rise to 114 degrees after 30 minutes and 120 degrees after an hour.

"Most of these people I would say love their pets and they're just not thinking so if you want to know what it's like put on a fur coat and sit in the car for a half hour on a hot day," Gross said.

A woman was arrested this week for allegedly leaving kittens a hot car. Thankfully they were still alive when a passerby noticed them.