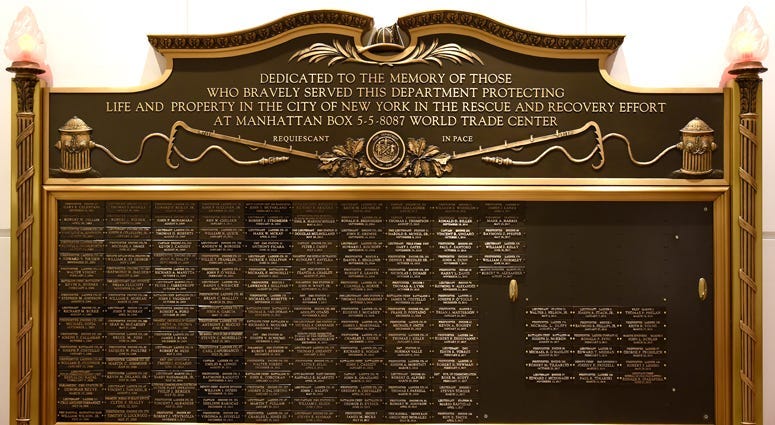 NEW YORK (WCBS 880) -- Days before the nation marks 18 years since the Sept. 11, 2001 terrorist attacks, the FDNY will honor members of New York’s Bravest who have died of 9/11-related illnesses.

Twenty-two names will be added to the department's World Trade Center Memorial Wall at FDNY headquarters in downtown Brooklyn on Friday.

“This solemn wall is a poignant and permanent reminder of the sacrifice of all that responded on September 11th and toiled for weeks and months at the World Trade Center searching for the innocent lives taken that day,” said Fire Commissioner Daniel Nigro. “Because of their dedication and bravery, each year the already staggering loss suffered by the FDNY continues to grow as illnesses claimed the lives of those who so bravely served our city.”

There were 343 firefighters killed in the attacks and more than 200 FDNY members who worked in the rescue and recovery efforts at ground zero have died of 9/11-related illnesses in the nearly two decades since that fateful day.

The rising death toll is heartbreaking, but former FDNY Commissioner Thomas Von Essen said he won't second guess himself about masks, which arrived within days of the attacks.

"I look back and I thought, 'Well, maybe we could've sent less people in,' but as far as the respirators, we had them by Friday. We had respirators for everybody. The first two days we didn't we were using Home Depot masks," the 73-year-old Von Essen, who is now a regional administrator for FEMA, told WCBS 880's Peter Haskell. "Unfortunately, it was hot, it was uncomfortable and people weren't wearing them, so I don't know what more we could've done. We could've been more disciplined about making them wear them, I suppose."

"I try to compartmentalize it. I let it out and I get emotional about it and I get it back in and I try to go on," said Von Essen. "It's a day that none of  us who lived through it and who lost so many wonderful and phonemnal leaders and heroes will ever forget."

The following names will be added to the wall: