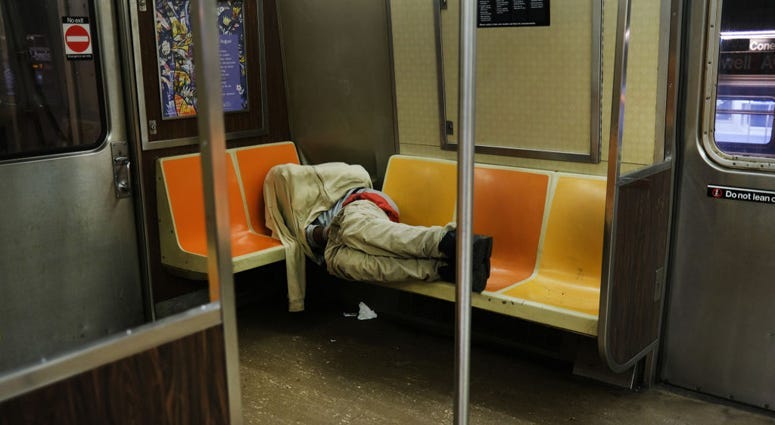 The board, in the afternoon, voted to amend the MTA’s rules of conduct to include a 90-minute time limit on how long someone can wait inside a station, prohibiting lying down and banning shopping carts on trains an in stations.

MTA Chairman and CEO Pat Foye says the rule changes are all about keeping riders and workers safe and healthy.

MTA Chief Safety Officer Patrick Warren notes the measures have been in place since April, under Gov. Andrew Cuomo’s COVID-19 emergency declaration, and the board’s vote simply codified the restrictions.

“The rules are targeted at minimizing health risks to our customers and employees,” Foye added.

It's unclear what the penalty would be for violating the rules, if approved by the MTA Board, but other violations carry fines of $25 to $100.

The rules do not explicitly mention homeless individuals, but advocacy groups are not pleased and say the rules are harmful for the city’s most vulnerable.

“Criminalization is not the solution to homelessness. It will give them a fine that people might not be able to afford. It will get some further entangled with the criminal justice system,” she explains.

In addition to the time limit and loitering rule changes, there could also be more restrictions around drinking on LIRR trains, with the proposed rule giving the MTA leeway to decide when and where alcohol consumption should be allowed.

Some New Yorkers feel the rule changes are a way to draw riders back to the subways amid a steep drop in ridership during the pandemic. The subways are still only carrying about a quarter of the riders they had before the pandemic, and possibly the appeal of a cleaner environment could encourage people to trek into the underground again.

Others say the MTA is trying to give the appearance of a cleaner system, especially with the continuing overnight shutdowns of the subway system to disinfect cars and station.

However, without federal aid on the way, the MTA is still looking at massive service cuts in the near future. Additionally, riders may be hit with fare hikes and driver on the bridges and tunnels could see tolls skyrocket.

Enforcement of the rules will fall to MTA police and the NYPD but, Foye says enforcement efforts from the NYPD last month were disappointing.

“There was a low level of summonses and arrests and enforcement in August,” he said.

With ridership still well down per capita, crime numbers on the subway have gone up since last year.