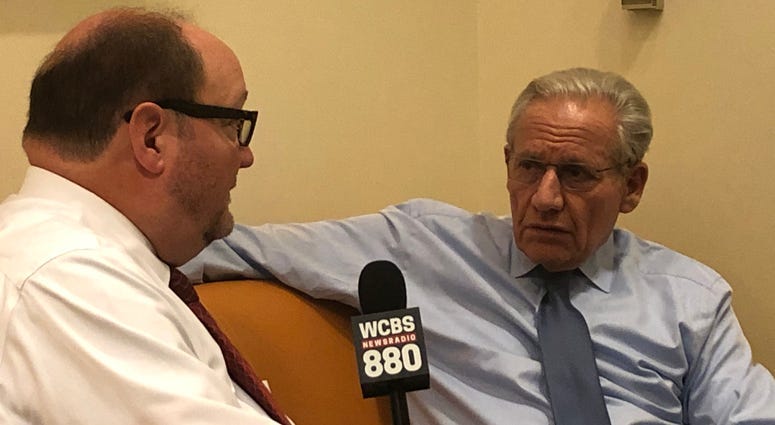 What Woodward doesn’t know is, how the current impeachment investigation will turn out.

In an interview with WCBS 880 on Thursday night, the award-winning Washington Post investigative journalist, who along with partner Carl Bernstein exposed the Nixon Watergate crimes, talked about the similarities between the Nixon impeachment case and the one facing Trump.

"There's some similarities and there are differences and we have yet to let it play itself out," Woodward said. “The Ukraine investigation – a lot has been presented – it’s a very serious matter, but where it goes and what it really means," Woodward said there is no way of knowing at this point.

Woodward has already written a book about dysfunction in the Trump administration, "Fear: Trump In The White House," says he is working on a second book on the Trump presidency that he hopes will be finished before the election next fall.

On the Trump presidency, Woodward says, "There are lots of things to worry about. I think it’s a governing crisis across the board. It’s something to worry about, but the Ukraine investigation, I want to know more."

Woodward says his current work looks at more than just the Ukraine investigation. He’s digging into other aspects of national security and domestic policy saying “it would be a mistake to focus on one thing.”

Woodward warned Congress and others about moving too fast on the Ukraine investigation.

“It’s a slow process and it's so important to the country and the politics and the sense of the moral authority of the president that we should not be in a hurry. Hurry means trouble," Woodward said. "They're doing this in two, three, four months, Watergate was two years of gradual unraveling of information and establishing what the political and public reaction was... as you know in journalism when you go fast that's when you screw up."

As for the 2020 Election, Woodward predicts a pretty rough ride next year. He says, "Next year is going to be a kind of political combat” that we haven’t seen in this country “since the Civil War."

"Trump has said impeachment is going to help me, I think a president also has to ask the question, 'What about the country? Is an impeachment and a trial a good thing for the country?' I think it's going to tear us up and further divide us," said Woodward, who spoke with WCBS 880 prior to his lecture at Newark's NJPAC as part of the popular New Jersey Speakers Series.