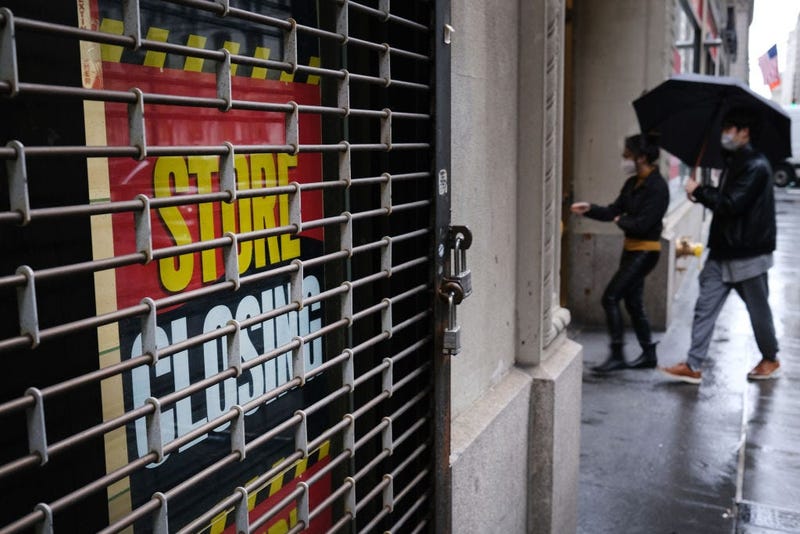 NEW YORK (WCBS 880) — As pandemic shutdowns continue across the state, New Yorkers have entered a financial crisis unlike any other; but experts say the state can still make a comeback.

Hundreds of thousands of people remain out of work, many are unable to pay rent or struggle to pay bills and thousands have applied for financial assistance.

“People like to think this is comparable to the 2008 Great Recession,” explained New York City Comptroller Scott Stringer.

Stringer, the city’s top financial watchdog, tells WCBS 880 the economic crisis created by the coronavirus pandemic is “more like the Great Depression”

According to the Independent Budget Office, New York City is expected to lose “an estimated 564,200 jobs in 2020” and city tax revenues over these next two fiscal years are expected to be short by combined $8.5 billion.

WCBS 880’s Peter Haskell and Tim Scheld spoke to both men for this week’ In Depth Podcast and they both agreed that Washington, D.C. must play a role in the recovery.

Ravitch, a former Chairman of the MTA and former Lt. Governor under David Patterson, had a front row seat for a similar – but different crisis. He worked on the state team in the 1970’s when New York came close to declaring bankruptcy because of “too much borrowing” and the deep recession the nation experienced.

At the time, Mayor Abraham Beame led a delegation to Washington, D.C. telling a congressional committee: “If the federal government does not help us, I think it will find the problem afterwards – which it will have to help us with – much more serious.”

In this week’s podcast, we looked back at that crisis to see if there was anything New York could learn from that time.

Back in the 1970’s President Gerald Ford was quoted in tabloid headlines as telling New York to “Drop Dead.” His top advisors suggested that New York City’s failing would have limited impact on the U.S. economy or the world.

Comptroller Stringer says that wasn’t true then, and stressed that today, “whatever happens in this city reverberates around the country and the rest of world”.

Stringer talked about the deep revenue losses and 20% unemployment in the city – especially in economically challenged communities, and communities of color as impetus, for finding solutions today.

“We are facing a financial crisis the likes we’ve never seen,” said Stringer. “We have to take measures now to bring the city back economically.”

The comptroller says the federal government must play a role and wonders why the current mayor hasn’t traveled to Capitol Hill to enlist the help of the New York congressional delegate in person.

He points out that, back in the late 70’s, that just what then-Mayor Ed Koch did.

“We need the federal government to step up and do its share,” Stringer stressed.

While the economic crisis from the pandemic is historic, Stringer and Ravitch are both optimistic about a New York recovery.

Ravitch believes the allure of urban living and the special “magic” of New York will return. He says he doesn’t know how long it will take, but guesses it will be a number of years.

As for Stringer, he is widely rumored to be close to announcing a run for mayor of New York City in 2021, and told WCBS 880 that he would likely reveal his plans “sooner rather than later.”

Though, he thinks New York city will continue to pull through until the mayoral election.

“I have never bet against this city, even in its darkest hour and I’ve always doubled my bet when it comes to New York coming back, so I’m betting on us,” he said.

Listen to the full conversation with New York City Comptroller Scott Stringer and the former head of the New York State Economic Development Corporation Richard Ravitch on the RADIO.COM app, or wherever you get your podcasts.