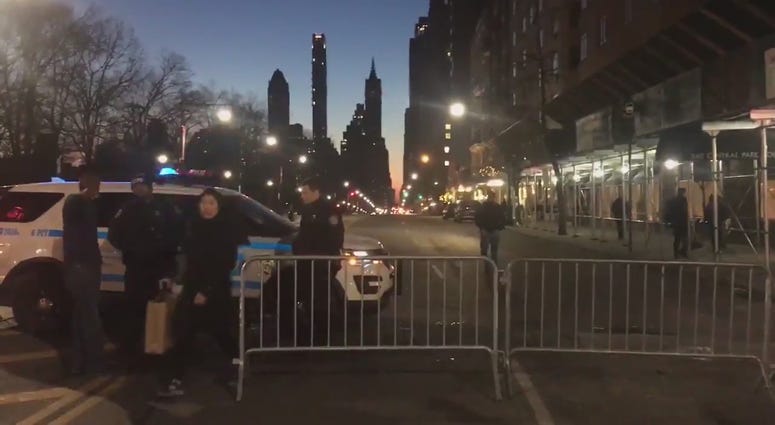 NEW YORK (WCBS 880) — Rising temperature are sending shards of ice crashing to the streets of Manhattan and the NYPD is taking no chances, closing off streets as eyes are cast to the sky.

The closure on Broadway between 57th Street to Columbus Circle began on Wednesday during the cold snap after chunks of ice started falling from a mega skyscraper under construction.

The frozen zone was expanded over the weekend to include Central Park South to Sixth Avenue.

One livery driver said despite the inconvenience he is grateful for the extra precautions.

"It's crazy, yesterday traffic was crazy, I had to pick up my people on 57th Street and Fifth Avenue," the driver said. "We never know, I'm a lucky person until now."

"It's real hectic right, we have to work beyond our means," said Cory, who works for a linen delivery service. He has been parking his truck at Columbus Circle and hauling large bins down Central Park South. "We're about two blocks away from each restaurant but we gotta make it work. With the ice falling, better to be safe than sorry. The NYPD is doing a good job protecting people and keeping people away from the falling ice."

There has been one injury reported at Columbus Circle. A man was cut in the face by falling ice at 58th Street and 7th Avenue and a chunk of ice fell through a building atrium on 7th Avenue.

An Uber driver also had a chunk of ice smash his windshield. He was not injured.