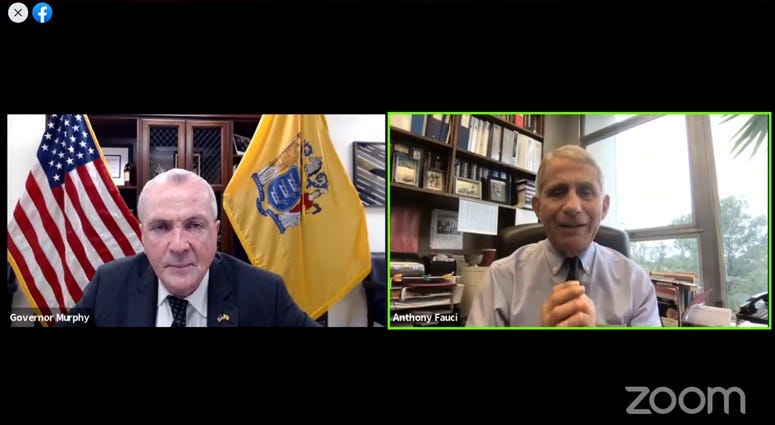 Dr. Anthony Fauci commended the state for its progress in the fight against the coronavirus  during a 30-minute Facebook Live chat with Gov. Phil Murphy on Thursday.

While the state "suffered greatly" at the onset of the pandemic, Fauci said New Jersey is now in a better position as it faces the upcoming challenges of the fall and winter.

Fauci said New Jersey is positioned "to continue to gradually, carefully, and prudently open your economy in a careful way at the same time to avoid the challenging difficulty of what happens when a lot of things go indoor versus outdoor."

He told the governor that New Jersey should also be able to handle a possible second wave since its infection rate has fallen to around 1.1%.

"The reason you're in good shape is that your baseline is so low.... Right now if you continue to carefully and prudently open the economy, you can get through the fall and the winter," Fauci added. "Your baseline is so low that you are going to be at an advantage when the inevitable cases occur, and they will."

New Jersey reported 588 new cases on Thursday. The nation is seeing around 40,000 new cases a day.

Fauci told Murphy that some countries, including Argentina, Australia and South Africa, took the right precautions against COVID-19, which also set them up for success for the flu season.

"They found that because of that, not only did they decrease COVID they had practically a non-existent flu season, which means that if we do it right, we could have a double positive whammy. We can bring down the flu at the same time that we keep the country, and for you guys specifically, New Jersey, keep you at that very low baseline," Fauci said.

Fauci said he doesn't think the nation will be able to get back to normal until vaccines are available to 100% of the country. He doesn't see that happening until the end of next year.

Fauci reassures the public that a coronavirus vaccine is safe.

He told Murphy that he goes on several podcasts and other mediums to stress safety without compromising scientific integrity.

"People keep plugging in saying I'm not so sure I trust it so we've gotta build the trust and outreach to the community that what we're doing is completely transparent so that they believe us when we say this is safe, this is effective," Fauci said.

Fauci told Congress on Wednesday that there is growing optimism that one or more safe and effective vaccines will be available by the end of the year or early next year.

He believes the U.S. could have enough doses by April.

"The total number of doses for everybody in the country to get vaccinated from all the different companies, there will be about 700 million doses in April, that means that theoretically you could vaccinate everybody then, but in reality, the logistics and practicality of people getting vaccinated likely won't be to the second or third or beginning of the fourth quarter of the year," Fauci said.

The first people to get a vaccine will likely be health care providers and vulnerable people, including the elderly and those with underlying health conditions.

Even with a vaccine, Fauci said there will still be a need for hand washing, mask wearing and social distancing.

"That is assuming that the vaccine is 100% protective and 100% of the people take the vaccine. That's not going to happen, so if we are I think lucky we'll get a vaccine that's 70% to 75% effective and we already know that a certain percentage of the population we still need to convince to get vaccinated so when a vaccine comes we look at it as an important tool to supplement the public health measures that we do it will allow us to more quickly and with less stringency get back to some degree of normal, but it is not going to eliminate the need to be prudent and careful with our public health measures," Fauci said.

While Fauci would like to see 100% of the American population vaccinated by the end of the 2021 calendar, he said 75-80% would be a "good accomplishment."