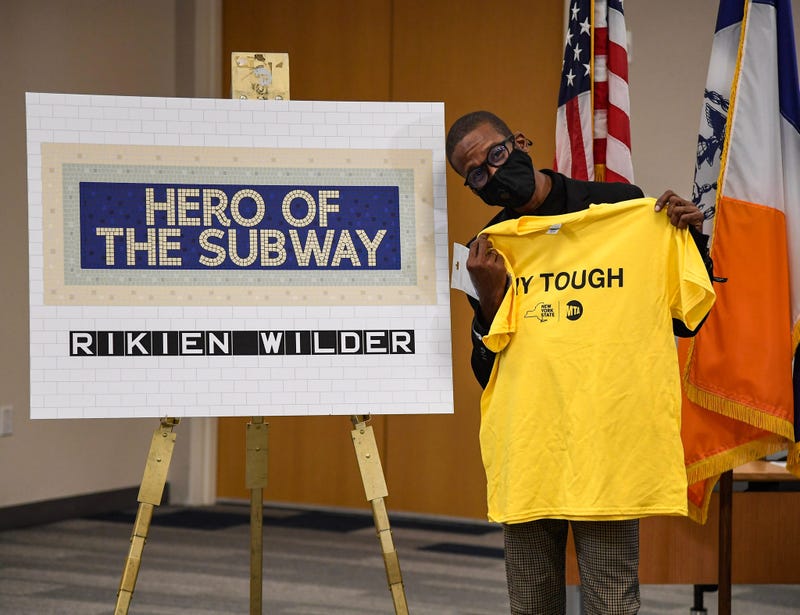 NEW YORK (WCBS 880) — The straphanger who worked to stop the man responsible for a subway derailment over the weekend was honored Wednesday by the MTA and rewarded with a year of free rides.

Rikien Wilder received what MTA Chairman and CEO Pat Foye called “the highest award the MTA can provide to a civilian” on Wednesday.

Wilder was waiting for the train at the 14th Street station on Sunday when he saw a man throw metal debris onto the tracks. Heroically, he acted quickly and jumped down to remove the object before racing to tell the station agent.

“My adrenaline kicked in and I was like, ‘I have to do something about it.’ Because, normally when something happens in New York, you watch the news and the guy gets away and they just have some like dark snapshot from a camera – they never catch the guy,” Wilder said.

“I removed what I could see, and I got up out of there because I could feel the turbulence from the train coming,” Wilder said.

When he and the station manager returned to the platform, the metal debris on the tracks, unfortunately, caused an A train to derail.

Though, Wilder was able to spot the suspect and chased him through the station before putting him in a chokehold and holding him for 15 minutes until the police arrive.

“It kind of angered me a little bit, because he seemed to get some joy out of wrecking the train and potentially harming people. So, I took it upon myself to apprehend the gentleman – gentleman, the perpetrator, or weirdo, whatever you want to call him,” Wilder said.

He says the suspect, who authorities believe to be Demetrius Harvard, was smiling and had a deranged look on his face.

Wilder was rewarded with a year of free rides. He also received a mask, a plaque and a T-shirt.