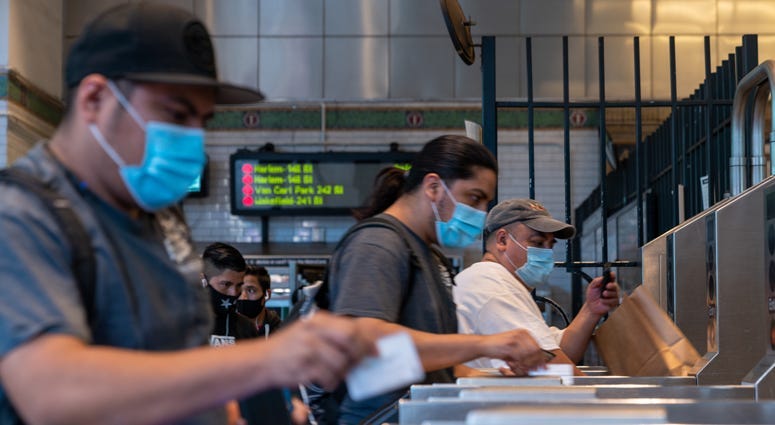 Since April, it's been mandatory for riders on the MTA system to wear a mask, but now if that rule isn't followed there will be consequences.

"That rule will provide for a $50 fine for failure to comply with the mask directive on subways, buses, Long Island Rail Road and Metro-North," said MTA Chairman Pat Foye, adding that wearing a mask is "a matter of respect for one's fellow co-commuters and MTA employees."

Mask compliance is already relatively high at 90% on the subway, and higher on buses and commuter trains, but Foye said achieving "universal mask compliance" is the agency's goal.

Foye stressed this measure is all about public health and safety, not about revenues.

Gov. Andrew Cuomo said he is seeing roads starting to fill up, and hopes this new rule will help bring people back to transit.

"New York City cannot deal with the vehicular traffic of everyone commuting by car," Cuomo said. "This is about building confidence. We want to make sure that people feel comfortable coming back."

Masks are required on all @MTA subways & buses.

No rider has the right to endanger fellow riders by putting themselves above the law & refusing to wear a mask.

The vast majority of people are complying & I thank them.

For the handful who refuse, there will be a new $50 fine.

Cuomo said fines will not apply to those have a mask but are wearing it incorrectly, say for instance below the nose, which the governor quipped has never been a problem for him.

"I have a very large nose so my nose keeps the mask up," Cuomo said.

"They've already got plenty to do and that's not their job," Feinberg said.

The transit workers union had been concerned about an uptick in employee assaults as a result of these new rules.