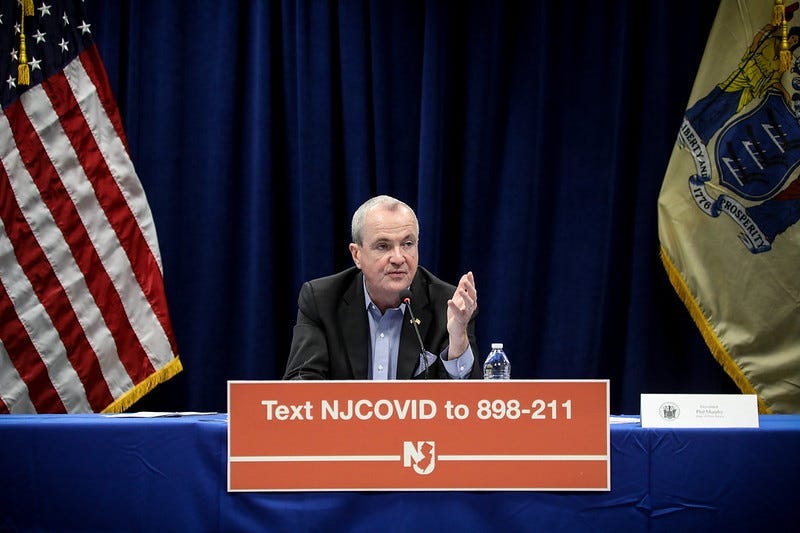 NEW YORK (WCBS 880) — New Jersey is now the state with the second most cases of COVID-19 in the nation and while aggressive steps have been taken to contain the spread, the virus so far shows no signs of slowing down.

While social distancing guidelines have closed schools, shuttered businesses, and put thousands of people out of work nationwide, President Donald Trump on Tuesday said that he hopes the country will be back up and running by Easter, but Murphy told WCBS 880's Lynda Lopez on Wednesday doesn't think that's possible.

"I hope he's right, I'm all in for at the right moment responsibly beginning to open up our economy and our society, but we're making the calls on this and we have since January based on the science, the facts, the medical advice and we just don't see it," Murphy said. "We think this is going to get worse before it gets better and that's not just a matter of a couple of weeks, this is a marathon that we're in and we're in a race to save lives. I hope he's right, I hope we get to April 12 and this is a transformed world, but the data that we're looking at does not suggest that and in fact if we relent, if we back off of our stay at home policies right now, which we are enforcing aggressively, our fear is that it will only get worse."

At a press conference on Wednesday afternoon, Murphy said that the state currently has 4,402 positive cases of COVID-19. In total, 62 people have died frrom the disease in the state.

Murphy said that those numbers will only continue to climb as the state steps up testing.

"When you open up testing, the numbers are going to skyrocket and they'll continue to skyrocket," Murphy said. "This is a fight, this is a war that we're in and we have to treat it like one and we are."

For the sixth day in a row, the drive through coronavirus testing center at Bergen County College in Paramus closed down after the parking lot reached capacity before the 8 a.m. open. The same thing has happened at the PNC Bank Arts Center in Holmdel the last couple of days.

Both locations get 350 coronavirus tests a day and Murphy said the only way to increase that capacity is by getting more supplies, such as personal protective equipment and raw materials including swabs.

"We would love to be able to be South Korea because everybody makes the point that universal testing is the best way. The bad news is your numbers go up, the good news is you have a lot better sense of the data. The problem is we have limited amounts of supplies in particular from the federal side," Murphy said. "I'm grateful for that fact that we've gotten some, but our ask is enormous relative to what we've gotten. So there's only so many that we can test given the supplies we've got."

Another drive through testing center is scheduled to open in Essex County.

"We only have so many of them," Murphy said. "We are trying to expand that universe as aggressively as possible with retirees, school nurses, nurses in their last semester of school, folks from out-of-state granting them automatic licensure in New Jersey."

The testing sites are only open to New Jersey residents who are symptomatic. Health officials have urged the “worried well” not to get in line.

"If you don't have symptoms, don't go for a test, please if you're just worried about this, I don't blame you, but step back and let the folks with symptoms get ahead of you," Murphy said.

An additional testing site opened Wednesday at William Paterson University and another one is set to open in Newark's Weequahic Park.

Three temporary field hospitals will be set up at convention centers in Secaucus, Edison, and Atlantic City, 1,000 beds.

At the press conference, Murphy said that he was ordering all childcare centers to certify that they are only caring for the children of essential workers. If they do not certify, they will be required to close by Apr 1.

The governor also said that summonses have been issued for people who have been discovered holding large gatherings.

music
It might not be 'Sour Candy,' but Lady Gaga is giving us ‘Chromatica’ themed Oreos
music
Keke Palmer posts inspiring PCOS makeup-free acne photo: 'I know this is not me’
music
Harry Styles answers critics perfectly with post calling for the return of 'manly men'
sports
Kirk Herbstreit worried for college football: 'What the hell is happening to our sport?'
music
Kelly Clarkson reveals thinking behind 'horrible' divorce: 'This isn't happiness'
music
Barack Obama admits why he didn't award Dolly Parton with Medal of Freedom: 'I'm shocked'