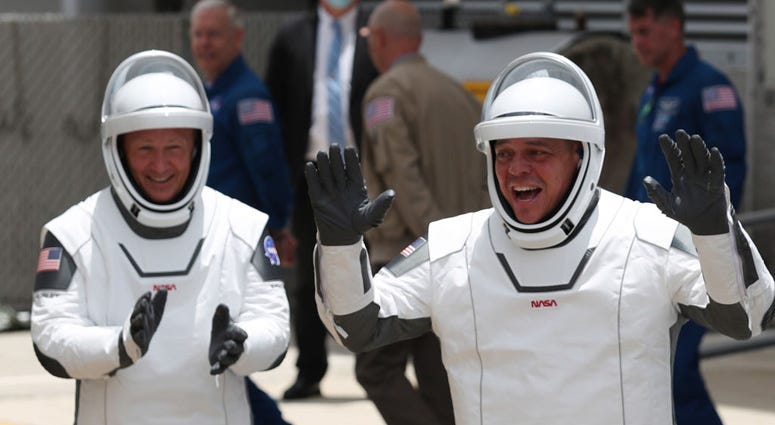 NEW YORK (WCBS 880) — Bad weather postponed what was supposed to be the first launch of two astronauts from U.S. soil in nearly a decade.

The history-making flight was called off with 16 minutes to go in the countdown because of the danger of lightning.

The next attempt will be at 3:22PM ET on Saturday, when NASA astronauts Doug Hurley and Bob Behnken will again try to fly the SpaceX Crew Dragon, the first privately-owned and operated human spacecraft, to the International Space Station.

This will be the first human spaceflight launch from the U.S. since the space shuttles were retired in 2011.

"It weighs very heavily, it's really all I can think about right now, so I really kind of have to kind of mentally block it because otherwise it would emotionally impossible to deal with," Musk said, adding that they're being extra cautious. "Anything anyone can think of to improve the probability of success make sure Bob and Doug are safely taken to the space station, that is the absolute priority — in fact it is not simply the top priority, it is the only priority."

Hurley and Behnken have both flown twice before to the ISS. Now, they become the first astronauts to fly on a SpaceX Crew Dragon Mission.

"This is what they're about, they are both graduates of test pilot school," said former NASA astronaut Mike Massimino, a veteran of two space shuttle flights on Columbia and Atlantis. "This is what their careers were before becoming astronauts was testing aircraft and they're now going to be testing a spacecraft so I think for them it really adds a special significance, not only to be the first to do this, but because they get to be the test pilots who check the vehicle out."

Massimino believes this launch will mark the next generation of space travel.

"Up until now it has been governments that have sent people to space. With the upcoming launch, it will be a private company sending people to space, kind of like the first commercial airplane ride, I think it's going to change the future, the way we do business in space, it's going to open all kinds of opportunities for exploration and commercial advancement in space," he said. "I think this will be looked upon as the clear point in history where all that changed and I think there's going to be a before and there's going to be an after, and I'm looking forward to the after because that's the future."