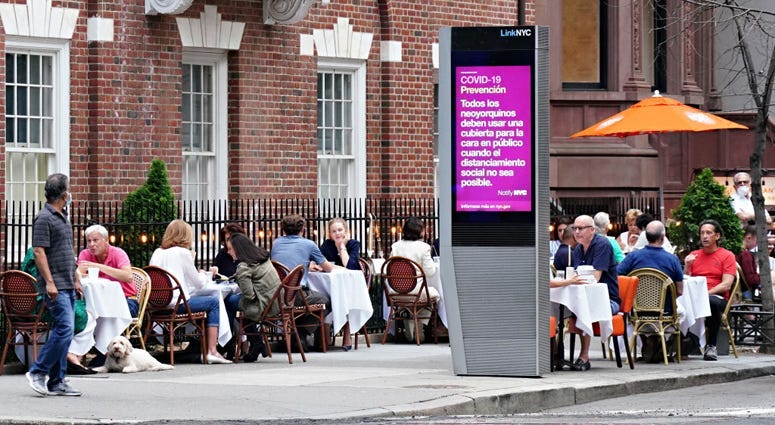 Mayor Bill de Blasio said Wednesday, "We cannot go ahead at this point in time with indoor dining in New York City."

"Even a week ago, honestly, I was hopeful we could, but the news we've gotten from around the country gets worse and worse all the time," de Blasio said, pointing to an spike in coronavirus cases in other states that opened bars and restaurants indoors.

According to the mayor, 6,600 restaurants have so far taken part in the Open Restaurants initiative.

Indoor dining at limited capacity was supposed to resume next Monday as part of the city's Phase 3 reopening, but Gov. Andrew Cuomo has expressed concerns about a lack of compliance with wearing face coverings and social distancing amid reports that dining in closed, indoor areas with air-conditioned systems could lead to spikes in COVID-19.

The governor said state police and health department officials were out Tuesday night checking on compliance as he considered his decision.

"In New York City we have a compliance issue and it's real," Cuomo told NY1.

Texas, Florida and California have all recently rolled back their reopenings of bars and restaurants in wake of an sharp increase in positive coronavirus cases.

"The bottom line is that situation is causing a lot of concern right now because what we've seen around the country is those indoor restaurants and bars caused a huge increase in the coronavirus cases in a lot of places, where as outdoor seems to be where a lot of positive things are happening," de Blasio told CNN ahead of announcing the decision. "We started outdoor dining on a vast scale a few weeks ago. It is going great, it is much safer, the customers love it, the restaurant owners love it, so we're going to double down in that direction."

Meanwhile, lifeguards will be on duty at New York City beaches and swimming will be allowed starting Wednesday.

The National Parks Service said Jacob Riis in the Rockaways and Great Skills Park on Staten Island will also have lifeguards. Parking there will operate at 50 percent capacity. 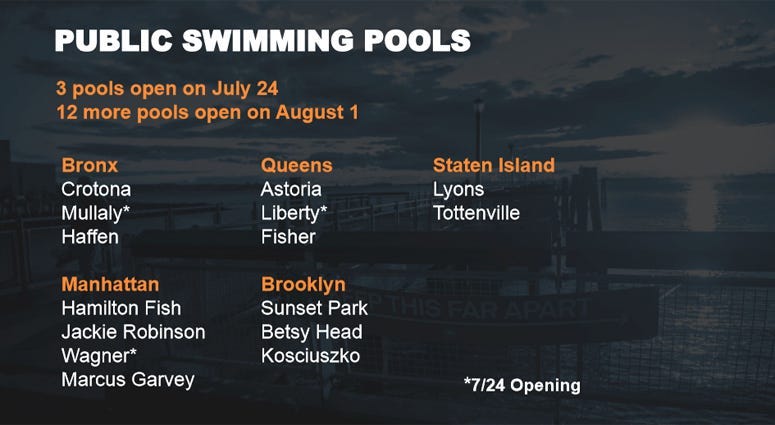 Approximately half of the city's outdoor swimming pools will reopen by August after the city's newly approved budget restored funding to the parks department budget to add lifeguards, pool staff and bring back sprinklers and water fountains.

Three pools will reopen on July 24 and 12 more will open on August 1.

There will be safety precautions in place at city pools, including social distancing and wearing face coverings.