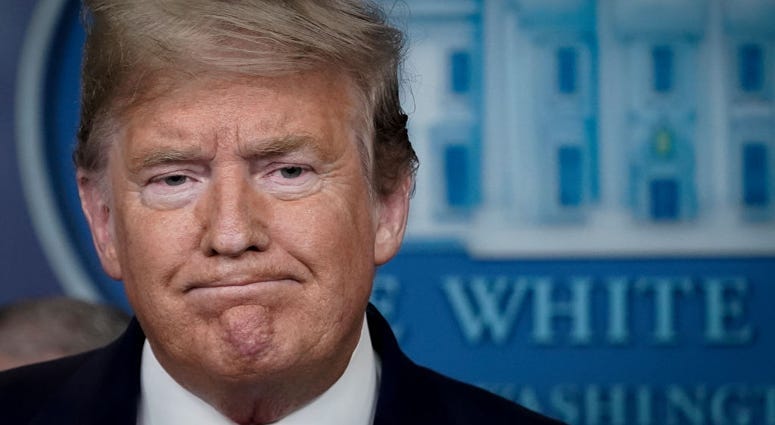 NEW YORK (WCBS 880) — New York is joining forces with New Jersey, Connecticut, Pennsylvania, Delaware, Massachusetts and Rhode Island in forming a regional advisory council to work together on developing a plan to reopen the economy once the coronavirus outbreak begins to subside.

A similar pact has been formed out west where the governors of California, Oregon and Washington also met to discuss the development of a coordinated reopening plan.

But last night, during his daily coronavirus briefing with his task force, President Donald Trump said it's his call to make when the economy reopens, and not the governors.

Taking to Twitter, Trump wrote that some are “saying that it is the Governors decision to open up the states, not that of the President of the United States & the Federal Government. Let it be fully understood that this is incorrect ... it is the decision of the President, and for many good reasons.”

....It is the decision of the President, and for many good reasons. With that being said, the Administration and I are working closely with the Governors, and this will continue. A decision by me, in conjunction with the Governors and input from others, will be made shortly!

During an appearance on NBC's "Today" on Tuesday morning. Gov. Andrew Cuomo pushed back against Trump's claim of "total'' authority to reopen the economy saying, "We don't have a king. We have a president.''

"It's very clear states have power by the 10th amendment," the governor said.

Cuomo also said if Trump ordered him to reopen New York's economy prematurely, "then we would have a problem," adding that it would a reckless and irresponsible move that could put human lives at risk.

On Monday, Cuomo and other northeast governors said under the new coordinated initiative,  each state will form working groups to design a re-opening plan taking into consideration the public health and economic concerns to issue guidelines and parameters to move forward.

"This is new terrain for all of us. As we make life-saving decisions there is strength in unity," Cuomo said. "Sate boundaries mean very little to this virus."

This is new terrain for all of us.

As we make life-saving decisions there is strength in unity.

While everyone is anxious to get back to work and get the economy moving again, Cuomo said it will take a careful and coordinated effort.

"We should start looking forward to reopening but reopening with a plan and a smart plan because if you do it wrong it can backfire," Cuomo said.

Each working group will include one health expert, one economic development expert and respective chiefs of staff from each state.

The council will share information, pool resources and develop a fully-integrated regional framework to gradually lift the states’ stay-at-home orders while minimizing the risk of increased spread of the virus.

"We've never been here before, but that doesn't mean you can't ensure public confidence that you're doing everything you can to do it in a smart way, an informed way guided by experts and data and science and not in political way and I think working together we can do that," Cuomo said.

While this will be a cooperative effort, Cuomo said he doesn't expect to wind up with a fully common strategy. Each state will have to take into consideration its specific circumstances and needs.

New Jersey Gov. Phil Murphy cautioned an economic recovery only occurs on the back of a complete health care recovery and jumping in too early could lead to unintended, grave consequences.

"This is the fight of our lives and we're not out of the woods yet, and reopening ourselves back up will be equally challenging," Murphy said, noting that while New Jersey's curve has flattened it has not yet reached a plateau.

Connecticut Gov. Ned Lamont echoed the remarks of Cuomo and Murphy saying, "It's so important that we work together thoughtfully on this, listen to the experts, and make sure you don't pull the trigger too early."