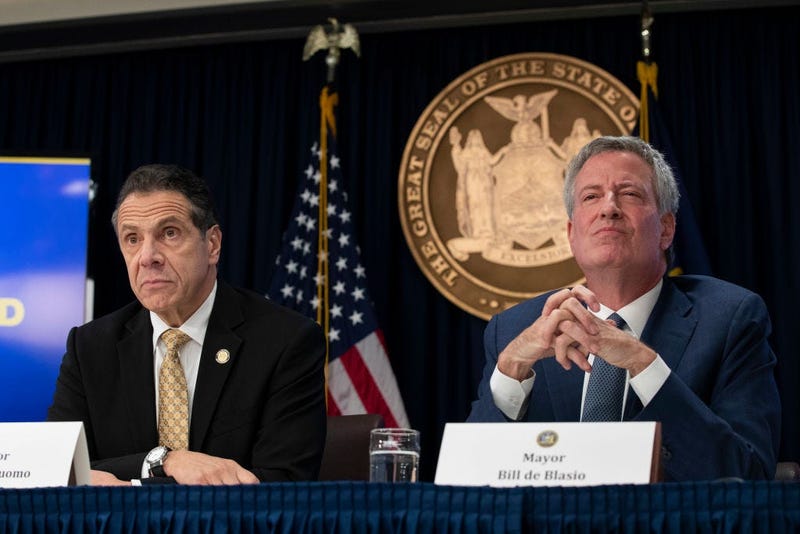 NEW YORK (WCBS 880) — Nearly 200 business leaders across New York City sent a letter to Mayor Bill de Blasio and Gov. Andrew Cuomo on Friday to urge them to come up with an organized plan to reopen the economy.

The CEOs of MasterCard, Macy’s, JetBlue and even the president of the New York Stock Exchange were among the 177 names signed on the letter, which notes they have the resources available to reopen the economy, but they need leadership.

She says those services are not being utilized and stresses that experts project a loss of $150 billion in economic output with over 700,000 people out of work.

“Right now, the mayor is focused on the schools – and, as we know, that’s been a very difficult and challenging effort. The governor is still focused on keeping us healthy,” Wylde said. “The question is: How can we support them in now moving to reopen the economy?”

She says a large part of the effort has to focus on low-income areas.

“The impact is felt most profoundly in our neighborhoods that were least prepared to absorb it,” she said.

Wylde acknowledges that support from the federal government is important but, “money is not the only answer.”

The letter also asks for the creation of a leadership group to streamline priorities, like getting schools back open, support for mass transit and keeping the city clean.

Mayor de Blasio responded to the letter last week, when 150 names had signed on, saying, “We’re grateful for our business community and are partnering to rebuild a fairer, better city.”

Dear Governor Cuomo and Mayor de Blasio,
We write to thank you for your leadership in managing New York’s response to the COVID-19 health crisis and to offer our assistance as the state and city begin to deal with the economic consequences of the pandemic. The losses attributable to the COVID-19 are still being incurred, but it is important to act now to develop a plan for recovery and resilience.
By all measures, New York City was at the peak of its economic powers on March 1, 2020, when the first coronavirus case was diagnosed. A report issued in July by the Partnership for New York City calculates that, in less than five months, the metropolitan region lost a million jobs and that up to a third of the city’s small businesses may permanently close. The region’s affordable housing deficit is projected to increase by at least 150,000 units. Economic losses, like health impacts, will be most profoundly felt by low wage workers and in communities of color. The report argues that the city will need to offer a new value proposition to residents and businesses that focuses on affordability, opportunity and innovation.
The essential assets of great cities — their density of diverse talent, high degree of social interaction, and access to the world — make them most vulnerable to public health challenges. The federal government has an obligation and vested interest in assisting cities that have been hardest hit by the pandemic, but so far there is no national agenda specifically targeted to urban relief or recovery.
As the first place in America to be struck hard by the coronavirus and the first to successfully manage its containment, New York should step up to chart the course for recovery of urban centers everywhere. We urge you to convene a multi-sector leadership initiative which can call upon the broadest possible range of resources and expertise to develop plans, policies and implementation strategies for how cities will overcome the challenges created by the pandemic and re-emerge stronger, fairer and more resilient than ever.
We are fully prepared to support this effort and believe it is critical to ensuring a vibrant future for New York and the nation.
Stay informed, stay connected — follow WCBS 880 on Facebook and Twitter. Download the RADIO.COM app + favorite WCBS 880 for breaking news, traffic and weather alerts.