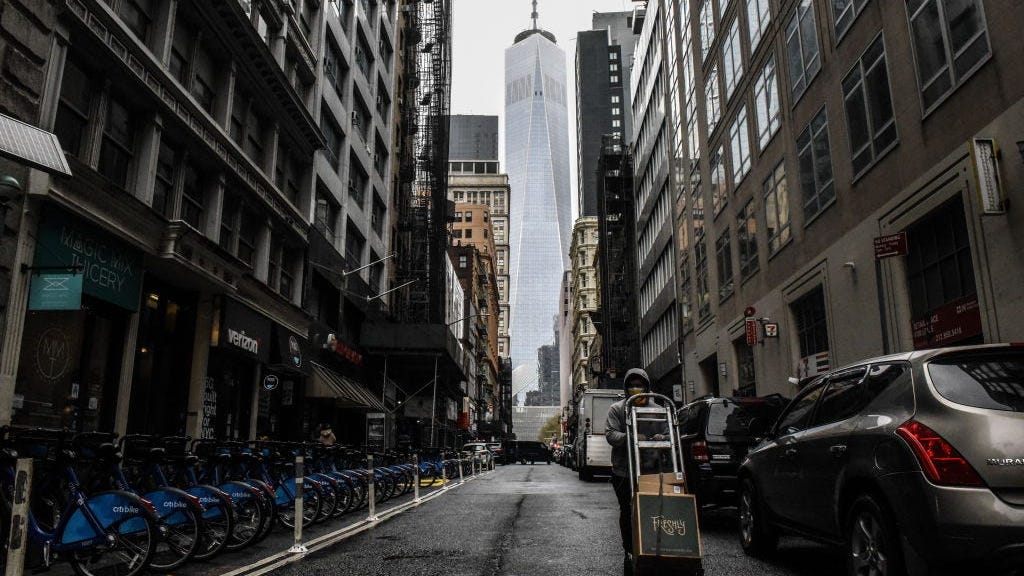 ‘They Will Come Back’: New Yorkers Say City Will Recover From Pandemic As It Did 9/11

NEW YORK (WCBS 880) — It was 19 years ago when the unthinkable happened — hijacked planes piloted by terrorists crashed into the Twin Towers, the Pentagon and a Pennsylvania field, killing thousands of people.

Commemorations are held every year at all three locations, where hundreds of victims’ relatives, survivors, first responders and dignitaries gather to remember the nearly 3,000 souls lost on Sept. 11, 2001.

But this year, amid the coronavirus pandemic, the events look and sound different.

In Lower Manhattan, the National September 11 Memorial & Museum observed the anniversary as it always has — with a commemoration ceremony at the former site of the Twin Towers, but the reading of the victims' names and tributes by family members were pre-recorded, not live as in previous years.

The museum invited relatives to gather on the memorial plaza for a scaled-back event to mark the anniversary "while adhering to state and federal guidelines regarding social distancing and public gatherings."

"As in years past, the focus of the commemoration will be the reading of the names. Out of an abundance of caution and in line with the guidance regarding social distancing, we will not ask family members to read the names of victims in person on a stage this year," the organization said. "Recorded readings of the names made by 9/11 family members will instead be used for the 19th anniversary commemoration ceremony." 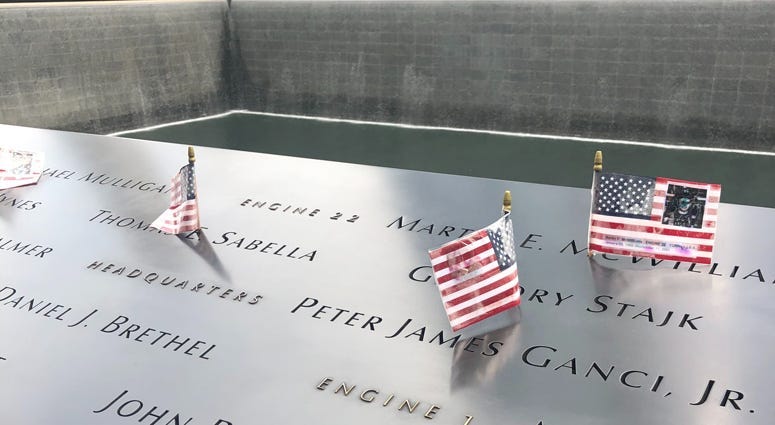 Family members stood at their loved one’s name on the memorial as the recording of the reading of the names played over loudspeakers.

There were six moments of silence, acknowledging when each plane hit the towers, when each tower fell, when the Pentagon was attacked and when United Airlines Flight 93 crashed into a field near Shanksville, Pennsylvania.

Without fail, love and devotion triumphed on a dark day as family members let nothing stand in their way, not even coronavirus, from honoring their loved ones at the 9/11 Memorial.

For John Cartier, of Queens, who has the face of his brother, James, tattooed on his arm, it is imperative that he be at the memorial every September 11th and this year was no different.

Nineteen years later, the terror attack continues to take a toll on him.

"I spent eight months here on the pile looking for my brother and now I'm in kidney renal failure, because of it. So end-stage renal failure, which many, many guys who worked here are going through that," Cartier said.

His brother, he says, was a good guy — courteous, respectful, devoted to family. From the 105th floor of the South Tower, he made one last phone call to his sister.

"His last words to my sister was, 'Tell mommy and daddy I love them. Tell everybody I love them,'" Cartier said.

Edwin Morales, a retired Army Reservists, wore his fatigues and a camouflage face mask to pay respects to his cousin, Ruben Correa, a firefighter with Engine 74.

"It still breaks my heart every year on 9/11, it doesn't get easier," Morales said. "I think it gets harder every year because as time goes on it seems like, 'Wow, he's been gone so long.' But the laughter and the memories is what keeps us going."

Morales said his cousin didn't shrink away from danger 19 years, and the pandemic wasn't going to keep him from paying his respects.

After learning that the memorial's traditional reading ceremony would not happen this year, the Stephen Siller Tunnel to Towers Foundation opted to hold an alternative memorial service just blocks away at Church Street and Liberty Street near Zuccotti Park.

Victims' relatives recited the names of loved ones live and in-person during the ceremony, which began at 8:30 a.m.

“The horrific loss of life, from the largest attack on US soil, a terrorist attack, requires that we read these names out loud, in person, on this day, every year. We can never minimize that fateful day,“ said Frank Siller, Chairman and CEO of Tunnel to Towers, who lost his brother, FDNY Firefighter Stephen Siller, in the attack.

Former Mayor Rudy Giuliani among those at the @Tunnel2Towers 9/11 anniversary ceremony. Giuliani says it’s disgraceful that @Sept11Memorial is not having the live reading of names. Both are remembering and recognizing the fallen. @wcbs880 #NeverForget pic.twitter.com/W81DYwO7y8

Before the start of the ceremony at the 9/11 memorial plaza, Pence and Biden crossed paths, greeting each other with an elbow bump as both men wore face coverings.

In the afternoon, Biden will pay his respects at the Flight 93 National Memorial in Pennsylvania, where President Donald Trump spoke at a morning ceremony saying that the victims will forever be a reminder that "no matter the threat, no matter the odds, America will always rise up, stand tall and fight back.''

Coronavirus kept some away from the remembrance services this year.

“So 19 years later, let's focus on what happened to our beautiful, beautiful U.S.A. back then. Remember the people of course. Remember my son, Jonathan, 29, married with two little boys. Firefighter, look at the firefighters, look at the cops. What did they do that day? They put everything aside and said we're going to help,” Ielpi said.

Last month, the pandemic nearly spelled the end of the annual Tribute in Light display, when the 9/11 Memorial & Museum initially announced it would not be shining the double beams of light that evoke the fallen towers, citing concerns about the health and safety of crew.

The Tunnel to Towers foundation stepped in saying it would organize the display in memory of the victims.

Following swift criticism, the museum reversed course and announced it would hold the tribute after Gov. Andrew Cuomo said the state would provide health personnel and supervision to safely display the lights.

“We were focused so much on caring about the safety and the health, the well-being of the workers and not put anyone at risk in this moment of a very alert illness environment,” Alice Greenwald, the head of the 9/11 Museum & Memorial, told WCBS 880 at the time. “Sometimes, you make a decision in deference to the right reasons, but the decision ends up being the wrong decision."

The foundation did hold light displays on Wednesday at the Pentagon and Thursday in Shanksville.

The pandemic also prompted the FDNY to send a memo to its members to forego gatherings marking the 19th anniversary of 9/11 because of the ongoing threat of the coronavirus.