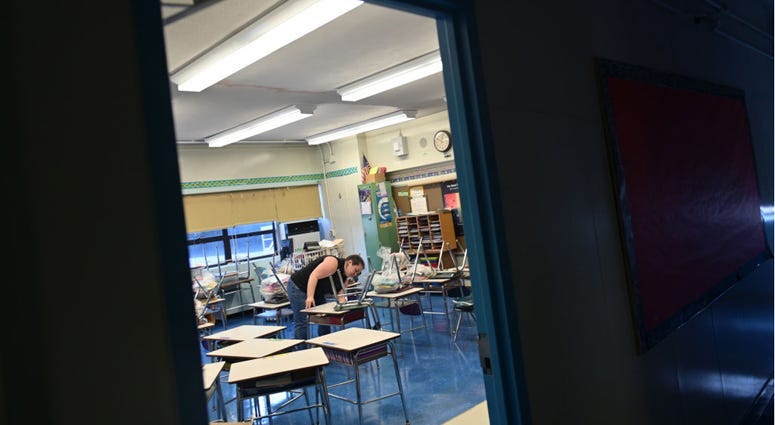 De Blasio announced Thursday that the city will reopen public schools for in-person learning in phases over the next two weeks, as opposed to all at once as originally planned.

The following Tuesday, Sept. 29, K-5 and K-8 schools will welcome students back into the classroom.

Initially, all schools were schedule to reopen for in-person instruction on Sept. 10, but the mayor delayed the start by 11 days after educators said schools were not yet ready for a return to the classroom.

The last-minute change to the schedule comes after discussions in the past 24 hours between City Hall and the teachers and principals unions.

De Blasio and union leaders said the city needed more time to prepare for the safe return of students and staff to school buildings. They mayor said he made a list of "20 different concerns that we’re going to work through to address."

Remote learning is already underway and will continue until schools reopen for blended learning.

The mayor also announced the city will bring on 2,500 additional educators — including substitute teachers and current Department of Education staff, as well as graduate students and adjunct professors from the City University of New York (CUNY) system — to fulfill staffing needs at 3-K, Pre-K, District 75, K-5 and K-8 schools.

"Our students, staff, and families have demonstrated tremendous resilience over the last six months, and we're going to continue to build on all the work we've done as we move forward," said Schools Chancellor Richard A. Carranza . "We are giving our schools more staff, more time, and more support to have the strongest possible start to the most unprecedented school year."

This is in addition to the 2,000 educators the city announced on Monday would be deployed to fill staffing gaps.

The unions make it clear the numbers will go up even further when it comes to middle and high schools.

"Because we have a promise, a promise to every parent, to every teacher, every guidance counselor, every student that walks into our buildings that we are doing what needs to be done to make sure that you will have your education, but it is also safe," United Federation of Teachers President Michael Mulgrew said.

"Nothing is more important to school leaders than protecting the health, safety, and well-being of their students and staff," said CSA President Mark Cannizzaro. "Although we are extremely disappointed that the start of in-person learning must be delayed again, it is simply not safe to open buildings to children without a teacher for every class. Our principals have communicated their staffing needs to their superintendents, and the Mayor has committed to providing these much-needed resources."

It's another round of whiplash for New York City teachers and parents.

"It feels like another bandaid that's just gonna cause chaos for families," said Liat Olenick, a science teacher in Brooklyn.

In addition to worries about testing, staffing and ventilation, she has a new concern: the clear instability of the city's plans and the effect that's having on weary parents.

"And I think a lot of parents are going to go all remote today because, I mean, who can take it? It's like a roller coaster. It's incredibly stressful," Olenick said.

She hopes these delay announcements aren't becoming an every other week ritual for the mayor.

"I mean it's just so confusing and not supportive to families," she said.

Asked what he would say to parents about the last minute changes, de Blasio declared, "I think they understand everyone is working nonstop trying to fix this complex problem."