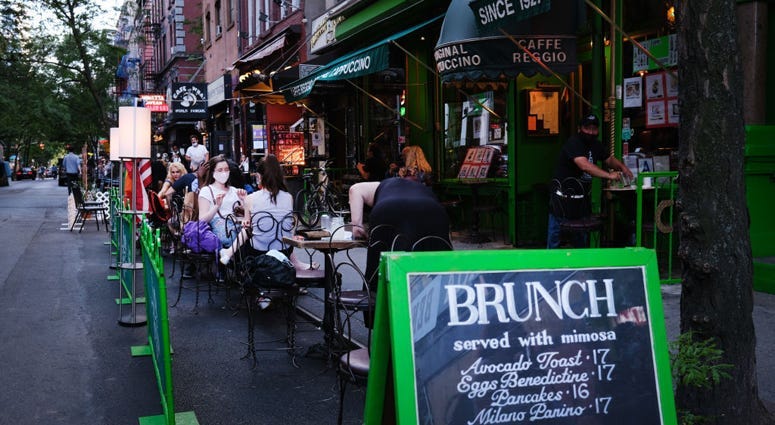 NEW YORK (WCBS 880) — Gov. Andrew Cuomo said he may order a pause on indoor dining for New York City, which is supposed to start a week from Monday.

"I would not want to roll back anything we've done, I want to continue to move forward, but we may move forward with caution," Cuomo said. "We have a week before New York City enters the next phase and we have numbers every day, but I'm going to be speaking to the electeds in New York City and the business owners in New York City. Malls and indoor dining are things that I'm concerned about, and we may consider slowing them down for next week. Not going backwards, but we may actually slow them down."

Cuomo said indoor dining has been "problematic" in other areas of the country and he criticized New York City for what he called a lack of compliance and enforcement of large gatherings and social distancing.

Texas, Florida and California have all recently rolled back their reopenings of bars and restaurants following a spike in virus cases.

"A number of cities and states unfortunately have been moving in the wrong direction and we do see a nexus to a particular problem. We all love indoor dining, but we also see problems related with indoor dining," de Blasio said, noting that in East Lansing, Michigan recently 85 patrons tested positive for the coronavirus all linked back to a single restaurant. "So we're paying attention to this lesson. My team spoke with the governor's team yesterday said we're increasingly concerned, I know they are as well. We are now going to re-examine the indoor dining rules for Phase 3."

De Blasio said the rest of the Phase 3 reopenings are moving on pace for Monday, July 6.

"The indoor dining element is now in question," de Blasio said. "We're going to work it through with the state, figure out how we want to approach it, if we want to pause that piece for a while or modify it. We'll have more to say in the next couple of days because we want restaurant owners to have that information right away."

Both Cuomo and de Blasio say outdoor dining is working across the board.

De Blasio said the health indicators in the city continue to be strong and positive. As a result, this weekend barbecue areas in parks will open for the July 4 weekend.