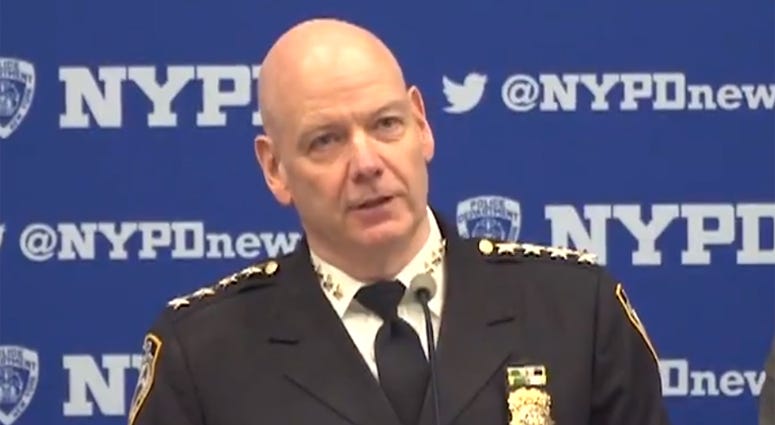 NEW YORK (WCBS 880) — NYPD Chief of Department Terence Monahan is responding to Gov. Andrew Cuomo's comments regarding the police response to protests being held across the city over the police custody death of George Floyd in Minneapolis.

During his daily news briefing Monday, Cuomo addressed videos posted on social media over the weekend of violent confrontations between police and protesters.

Speaking specifically to an incident in which an NYPD vehicle is seen driving into protesters who had surrounded the car and started throwing objects at officers Cuomo said, "If I was just Andrew Cuomo from Queens, it would be simple, I would say, that guy should be fired."

"Drive the car into a crowd, he should be fired. That's what Andrew Cuomo in Queens says. As governor, there's laws, there's processes, there's going to be lawsuits, I get it … that doesn't mean you do nothing in the interim," the governor said, adding that the state's attorney general will be reviewing police conduct.

Asked about the governor's comments during an interview on WCBS 880, Monahan said, "The governor should have been out there seeing the bricks thrown on our heads, and I've been hit with bricks. The Molotov cocktails thrown at occupied police cars, the frantic radio transmission from a precinct commander who was trapped in his radio car with a mob pulling him out saying, 'This might be my last transmission.'"

"That's what's going through the head of a police officer as he's trapped by one of these crowds. It is not something that I think anyone wants to be put in that situation," Monahan went on to say. "Let's take into account that an officer may have thought his life was in danger at that moment. So it's something that we'll look into, but let's take it into perspective for the chaos that's been going on."

Monahan and Cuomo agree bad actors are trying to hijack the narrative of the mostly peaceful protests.

NYPD Deputy Commissioner of Intelligence and Counterterrorism John Miller belives anarchist groups are seeing this moment of unrest as an opportunity for criminal activity.

After a particularly violent night that left widespread damage across the city as looters plundered luxury stores in Midtown and SoHo, Monahan said the NYPD will bring in other resources in anticipation of more demonstrations "that aren't going to be quite as obvious to those who are looking to loot stores."

Monahan also said that in response to the violence, officers will now be working 12-hour shifts.

"It puts a ton of stress on us," he said. "It is taking resources to address this away from our communities that need our cops, there will be less cops to respond to 911 calls in the outerboroughs where things aren't happening because we need them to address these conditions. that's why we have to go for the 12-hour tours. It's going to be a lot of tired police officers, but we've done this before and there's no way we would ever allow this city to get into the hands of a few thousand people who are organized, who attack police officers and who create mayhem."