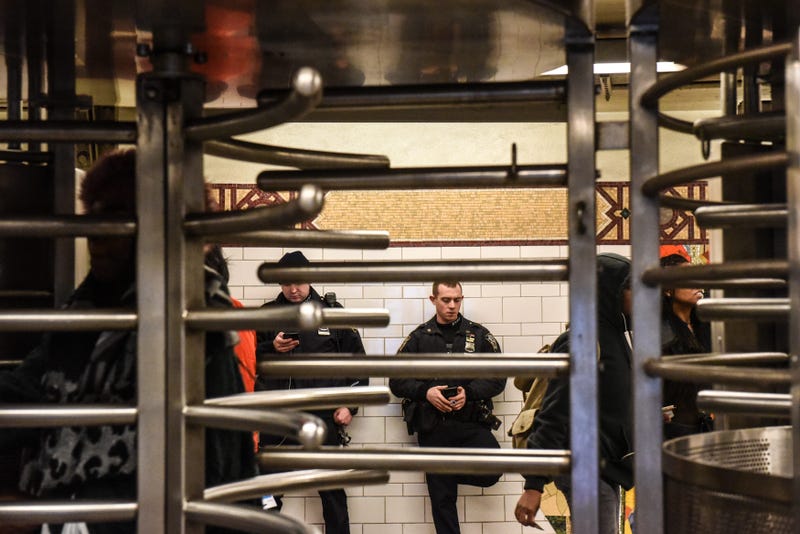 The MTA’s new policy of fining riders $50 if they are seen without a mask on went into effect Monday, but NYU student Mihai Ciocan says he spotted two maskless NYPD officers inside the Clark Street subway station in Brooklyn on Tuesday.

Video taken by Ciocan, which was posted to TikTok and later taken down, shows the officers without masks and standing less than six feet apart.

“Does the fine apply to just me or you guys if you don’t wear a mask,” the college student asks the officers.

One responded that they did not need to wear masks if Ciocan remained six feet away from them, and they would put on a mask if he needed to approach them.

When Ciocan points out that they are less than six feet apart, the second officer tries to call the college freshman a “Karen.”

Ciocan says he did not think the officers set a proper example and says he has filed a complaint.

Gov. Andrew Cuomo later addressed the incident during a news conference on Thursday, reminding the officers that the law applies to them as well.

“Protesters and police, the law applies to you, the law still applies and police department your job is to enforce the law; why don't you follow the law? It is a very bad signal when you see police people who are not wearing a mask. How can you enforce it if you don't follow it? And also to local electives, it is your responsibility to make sure your police department follows the law,” the governor said. “To the local governments, you are responsible for monitoring the compliance with the reopening plan.”

The MTA has said the mask rule applies to all people inside the transit system and the NYPD agrees.

In a statement, the police department said, “It's important officers are reinforcing the best health practices and wearing a mask for their own safety. Officers will continue to set the right example for the public and ensure safe transportation for riders. In addition, we are doing spot checks of our officers throughout the system.”