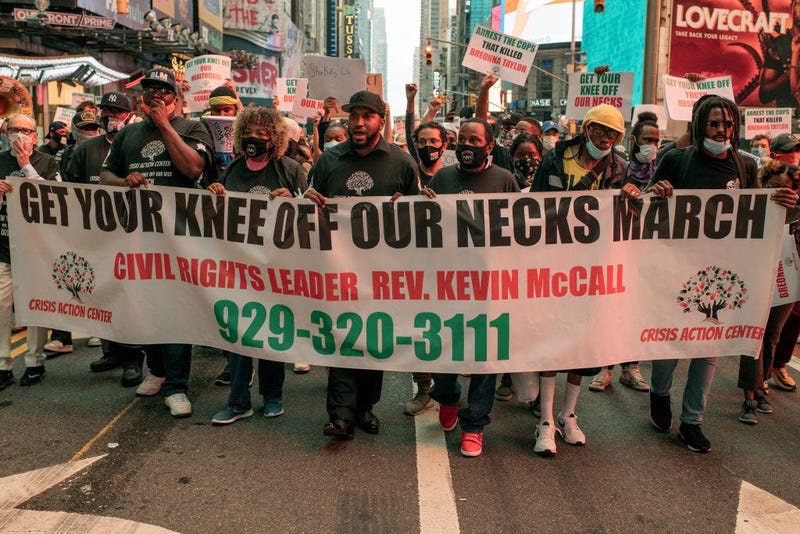 NEW YORK (WCBS 880) — A protest against police brutality made its way through Manhattan on Friday, finishing outside of Trump Tower on Fifth Avenue.

The “Take Your Knee Of Our Necks” march began at Times Square with the families of George Floyd, Breonna Taylor and Eric Garner participating in the demonstration.

The protests began nearly 10 weeks ago, when Floyd was killed by a Minnesota police officer who placed his knee on Floyd’s neck as he placed him under arrest.

Garner’s mother, Gwen Carr, says the incident was horrible and reminiscent of Garner’s death. Though, she says the protests are still far from over.

Floyd's brother, Terrence Floyd, says some people are tired of the marches, but he is tired of being “sick and tired.”

“Everything is fight, fight, fight. And they say they want the protesting to stop,” he said.

Terrence noted that the officers who killed Taylor inside her home while executive a search warrant at the wrong apartment still walk free, and said the protests will continue so long as she does not have justice.

"Were sick and tired of being sick and tired." - Terrence Floyd, #GeorgeFloyd's brother at today's #getyourkneeoffournecks rally outside of @TrumpTower on 5th Ave@wcbs880 #wcbs880 pic.twitter.com/v9mZZoPyyq