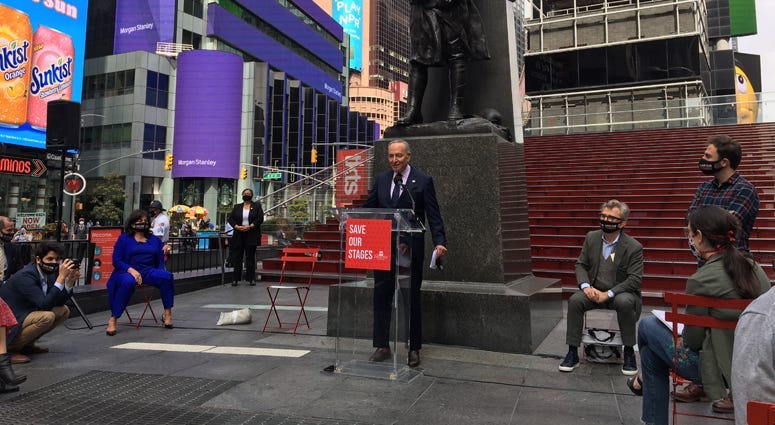 NEW YORK (WCBS 880) — Broadway theaters were one of the first industries to close down at the onset of the coronavirus pandemic and it'll likely be among the last to open.

That is raising fears that the curtain could come down for good on live entertainment venues.

Now, Sen. Charles Schumer is pushing a $10 billion federal relief package called "Save Our Stages" to save theaters across the country.

"Ninety percent of our independent venues are going to close if they don't get help. There's no revenues," Schumer said Friday at a news conference held in Duffy Square, where billboards are bright but, theaters remain dark, six months after closing in March. "Every one of them, from the large stages on Broadway to the little venues in Williamsburg, Brooklyn could go under if they don't get help."

If President Donald Trump backs the bill, Schumer thinks Republicans in Congress will jump on board.

Broadway was among the first industries to shut down because of Covid and it’ll likely be among the last to reopen. @SenSchumer wants a $10bil package to #SaveOurStages. It would provide grants to performance venues around the US. @wcbs880 pic.twitter.com/XPqcT7QdDt