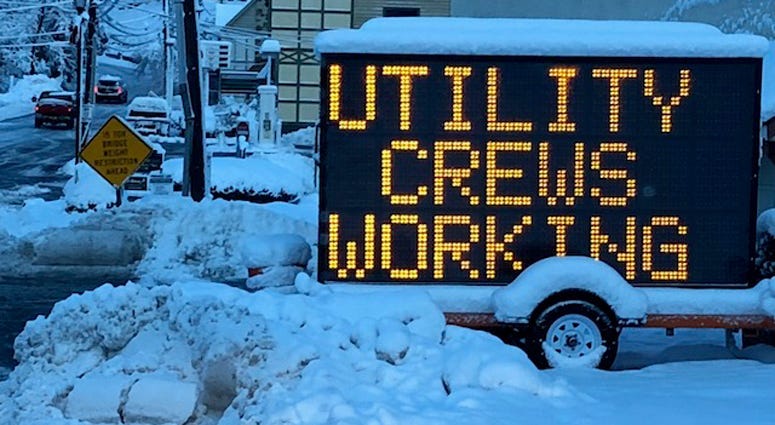 TRENTON, N.J. (WCBS 880/AP) -- The last of the snow fell over parts of New Jersey early Tuesday morning after leaving behind power outages in the northwest part of the state.

The National Weather Service says trained spotters reported Monday's storm left behind 10 inches of snow in Sussex and Morris counties. Somerset county saw 4 inches and, there was more than 2 inches in Monmouth County.

For northern New Jersey, the storm was both picturesque and problematic.

On one hand you have the majesty: snow covered hills and chalets around Lake Mohawk makes Sparta look like some place in the Alps, but the snow comes at a price.

"I must have shoveled the deck off and around the building like three or four times," resident John Giacovis said. "We lost power at around 4:30 last night. That was the worst thing losing power. I'm getting into work and power is off at work even."

Giacovis plans to empty his fridge, put the food in coolers and then move it outside.

The heavy, wet snow caused tree limbs to bend and break, taking down power lines across the region.

Jersey Central Power and Light reported 36,552 homes and businesses were without electricity, mainly in Sussex, Morris and Warren counties.

New Jersey State Police say they responded to 428 accidents by 6 p.m. Monday and had 312 calls to assist motorists.

Transportation Department road crews have cleared the state's major highways, but motorists are advised to use caution because of icy spots.

In Connecticut, roads were slippery as the snow moved out Tuesday morning.

"I was just coming up the hill and just slid out on the snow so and I can't really move now," said one driver along Route 7. "This is a Pontiac Firebird. My truck is out of commission right now so I had nothing else to drive. "

He was trying to get to the job early because he's the one that plows out the parking lot.

In New York, while the city didn't get a lot of snow, it was a whole different story in the northern suburbs, where Middletown got 10 inches.

"I thought it was only going to be like 6 to 8 inches, not expecting over 10," one woman said.

This is a slushy, dirtier snow and when the plows come down the street it can make it tougher on the snow blowers, reported WCBS 880's Mack Rosenberg.

Some like, Damian, are embracing an early start to winter.

"You gotta be ready, get your salt, get your shovels, get your snow blowers ready cause winter's here," he said.

The snow has moved on, making way for the sun. Tuesday will be mostly sunny, brisk and cold, with a high near 40.

Wednesday will be partly cloudy with highs in the low 40s.