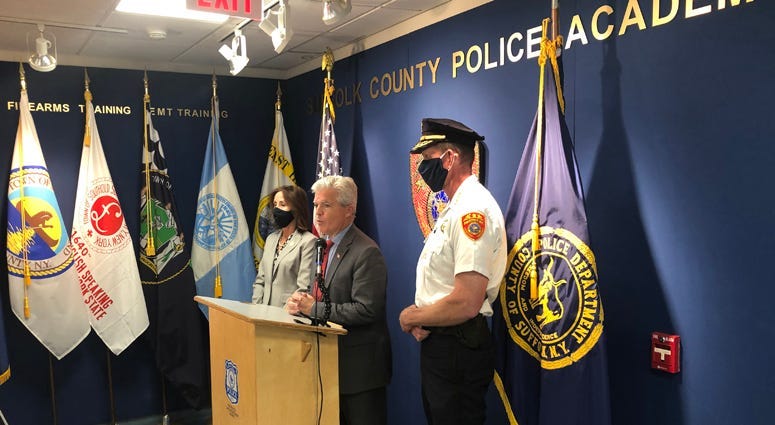 BRENTWOOD, N.Y. (WCBS 880) — Suffolk County Executive Steve Bellone says police budget cuts are in the works because millions of dollars in federal funding has not been approved.

Due to the fiscal crisis created by the coronavirus pandemic, Bellone said the county is prepared to slash about $20 million in police spending if the federal government doesn't step in to help.

He made the announcement Friday at the Suffolk County Police Academy in Brentwood, which is shut down.

"Because of the cuts that we have to make due to federal inaction, we will effectively be shuttering this police academy for the next year and a half," Bellone said. "We would've been filling this academy up this year with new officers coming in, training new officers. That's canceled."

The cuts will eliminate a new class of officers.

"Now because of federal inaction we will see 200 fewer officers on the streets," he added.

One program on the cutting board without the funding is the School Resource Officer Program, which was established in 1998 and has been credited with helping stop students from joining gangs and saving lives by stopping crimes, including the attempted kidnapping of a student by MS-13.

As part of the cuts, the county would redeploy officers in the Community Support Unit, freeze promotions and cut aid to local law enforcement partners.

"Make no mistake these cuts to resources will put our police officers at greater risk, jeopardize the progress we have made and stall the work that we are committed to as we continue to build relationships with all of our communities," Suffolk County Police Commissioner Geraldine Hart said.