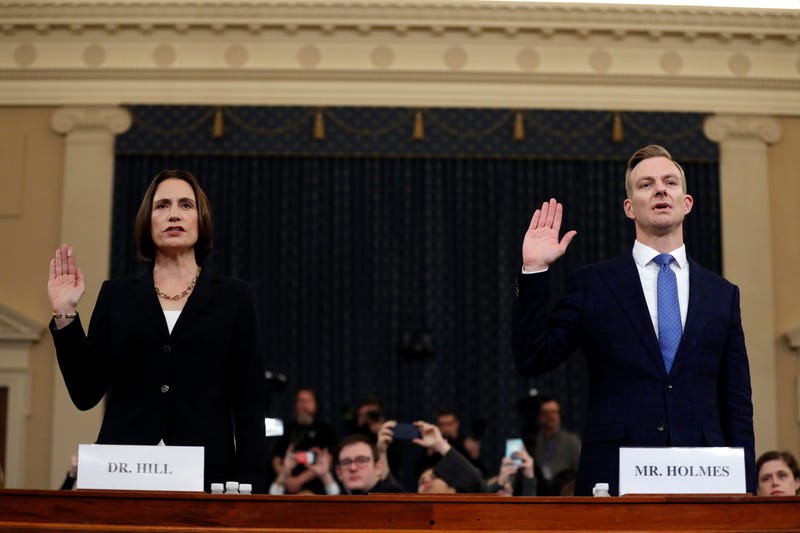 WASHINGTON (AP) — The final testimony of an extraordinary week of impeachment hearings came from a former White House national security adviser who wrote the book on Vladimir Putin — literally — and a political counselor at the U.S. Embassy in Ukraine who overheard a pivotal conversation between President Donald Trump and EU ambassador Gordon Sondland.

Takeaways from Day 5 of the impeachment inquiry before the House intelligence committee:

The British-born Hill is a Russia expert who’s written extensively on the Kremlin, and she made that clear from the outset when she scolded Republicans lawmakers for propagating what she said was a “fictional narrative” — that somehow Ukraine, not Russia, interfered in the 2016 U.S. presidential election.

Those discredited theories have been advanced by Trump himself, who in a July 25 phone call at the center of the impeachment inquiry asked Ukraine’s leader to investigate the possibility.

Hill said the unwillingness by some to accept Russia’s role has profound consequences at a time when Russia’s security services have “geared up to repeat their interference in the 2020 election.” Putin, she said, deploys millions of dollars to “weaponize our own political opposition research and false narratives.”

“When we are consumed by partisan rancor, we cannot combat these external forces as they seek to divide us against each another, degrade our institutions, and destroy the faith of the American people in our democracy,” Hill said.

At another point, she implored impeachment investigators — and the country at large — to stop advancing fictions that she said distract from the attention needed to fight Russian interference.

“In the course of this investigation, I would ask that you please not promote politically driven falsehoods that so clearly advance Russian interests,” Hill said.

The July 26 lunch on an outdoor terrace in a Kyiv restaurant started out social enough. There was a bottle of wine and affable chatter about marketing strategies for Sondland’s hotel business.

Then, according to David Holmes, a counselor at the U.S. embassy in Kyiv, Sondland said he was going to call Trump to give him an update. The conversation Holmes overheard was loud — and memorable.

“I then heard President Trump ask, ‘So, he’s gonna do the investigation?’ Ambassador Sondland replied that ‘he’s gonna do it.’” He said Sondland told Trump that Zelenskiy will do “anything you ask him to.”

When the call ended, Holmes said he asked Sondland if it was true that Trump did not “give a s--t about Ukraine.” Sondland said that it was indeed the case.

“I noted that there was ‘big stuff’ going on in Ukraine, like a war with Russia, and Ambassador Sondland replied that he meant ‘big stuff’ that benefits the president, like the ‘Biden investigation’ that Mr. Giuliani was pushing.” That was a reference to Rudy Giuliani, Trump’s personal lawyer, who had been pushing for Ukraine investigations.

The account of the conversation largely lined up with Sondland’s own version, though Sondland testified Wednesday that he doesn’t remember discussing Biden with Trump.

She described her alarm with the work of Sondland, who was central in trying to get Ukraine to announce political investigations the president wanted. Sondland acknowledged his role in those efforts Wednesday, laying out the contours of a quid pro quo with Ukraine and said “everyone was in the loop.”

But Hill insisted that she was never on the same page with Sondland.

She said in retrospect, she thinks she may have been a bit rude to Sondland because she can see now that Sondland was trying to carry out something that the president had instructed him to do.

Vindman was 3 years old in 1979 when his family fled the Soviet-controlled Ukraine for the U.S. Earlier in his Army career, Vindman served as an infantry officer and did tours in South Korea, Germany and Iraq. In October 2004, he was wounded by a roadside bomb and awarded the Purple Heart.

But Vindman, an NSC Ukraine specialist, has faced questions from Trump allies about whether his loyalties may be divided, because of his origins. He has steadfastly maintained his loyalty is to the United States.

“This is a country of immigrants,” Hill reminded lawmakers. “This is what, for me, really does make America great. I’m sure that every single person here — some people perhaps came reluctantly — and some came by choice as I did. For me, this is the essence of Americans and why I wanted to be here and why I wanted to stay here.”

His name was mentioned dozens of times on Thursday alone, but former national security adviser John Bolton was nowhere to be seen in the committee room. In fact, media reports indicated he was in New York.

Bolton hasn’t been subpoenaed by to appear, and House Intelligence Committee Chairman Adam Schiff has so far suggested he won’t be, even though his testimony could be of high interest to impeachment investigators.

Schiff has indicated he doesn’t want a prolonged court battle over Bolton’s testimony, and Democrats have said they already have a mountain of evidence in their impeachment probe. it’s not clear he’ll be.

Still, Hill described colorful language from Bolton — she quoted him as saying that didn’t want to be part of “whatever drug deal” Sondland and White House acting chief of staff Mick Mulvaney were “cooking up” and describing Giuliani as a “hand grenade that was going to blow everyone up.” She described seeing him “stiffen” and abruptly end a White House meeting last July when Sondland brought up the topic of investigations.

Holmes also described an August visit to Ukraine by Bolton in which he told an adviser to the president that military aid for Ukraine would not be lifted before an upcoming meeting in Warsaw and would turn on whether Zelenskiy was able to “favorably impress President Trump.”

6. TRUMP ON THE DEFENSIVE

In a series of tweets, Trump urged House Republican allies to “Keep fighting tough,” and told them they are “dealing with human scum who have taken Due Process and all of the Republican Party’s rights away from us during the most unfair hearings in American History.”

Still, Trump insisted, that “we are winning big” and warned that “they will soon be on our turf” — presumably a reference to the inquiry moving to the Senate, which Republicans control.

Trump has repeatedly proclaimed his innocence and accused Democrats and the media of pursuing a “witch hunt” to damage him heading into 2020.

He claimed he and Republicans had “had a GREAT day” of testimony Wednesday, even though Sondland, his ambassador to the European Union, bolstered Democrats’ impeachment narrative as he repeatedly talked of a “quid pro quo” involving Ukraine. Yet Trump complained that, when he “got home to the White House & checked out the news coverage on much of television, you would have no idea they were reporting on the same event.”