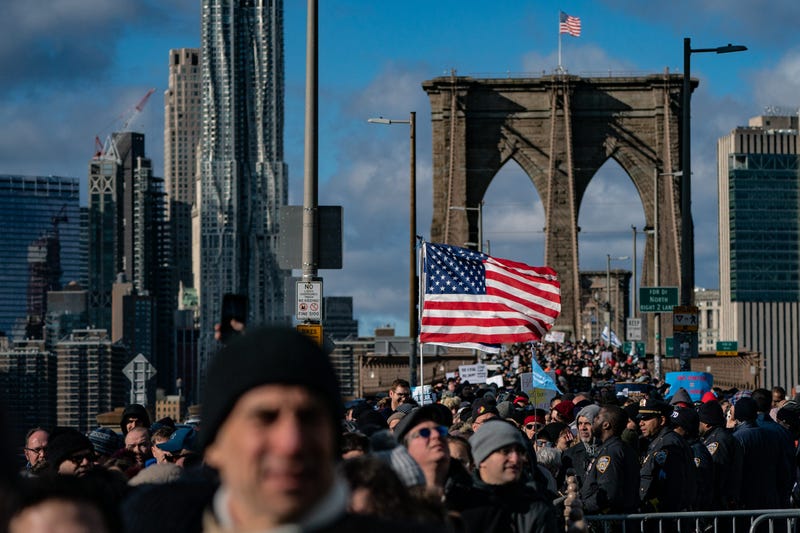 NEW YORK (WCBS 880) – An estimated 10,000 people walked across the Brooklyn Bridge on Sunday in a solidarity march supporting Jewish communities amid a rash of anti-Semitic attacks in New York City and the region.

The "No Hate, No Fear Solidarity March" started at 11 a.m. in Foley Square. Marchers were going over the Brooklyn Bridge to Cadman Plaza in Brooklyn.

“There’s a rise of anti-Semitism, not only in the United States, but from around the world. And it’s just, we need to just confront it totally and unequivocally without any conditions,” Blake Flayton said.

Flayton was wearing a pink yamaka representing the Jewish and LGBTQ communities, two communities he says have faced an uphill battle in equality and justice.

“The dangerous threat of anti-Semitism is growing in our country. But don't let anyone talk you out of your own power to speak out and stop it.”

“It’s definitely scary for us to have our children be outside synagogue or go into Jewish schools knowing that there are people that would come out and try to hurt them just because they are Jewish children,” one mother attending the march said.

“Anti-Semitism is an attack on ALL New Yorkers — and we stand up for our neighbors in this city.”

The governor announced his legislation to set aside $45 million towards protecting houses of worship in the state.

A machete attack at a Hanukkah party in Rockland County last month left five people injured; one of the victims is fighting for his life. Just weeks before that, a shooting at a kosher supermarket in Jersey City left three people dead, including a store owner, store worker and customer. And over the past few weeks in Brooklyn there has been a spike in anti-Semitic crimes, with more than a dozen reported over the past couple weeks. Mayor de Blasio declared a "crisis" of anti-Semitism while visiting a synagogue on the Upper West Side on Saturday.

In New York, we refuse to accept any kind of anti-Semitism or hate. There is no room for fear for any of our beautiful and diverse communities.
⁰Today, we marched across the Brooklyn Bridge to reject this ugly form of hate. #NoHateNoFear pic.twitter.com/6LUnzAZJwB

Our Jewish communities in New York are suffering from an unprecedented escalation of anti-Semitic violence. Together, we stood with them to share in their grief, rise up against hate, and do everything we can to protect them. #SolidarityMarch pic.twitter.com/S7TDaNaXlW