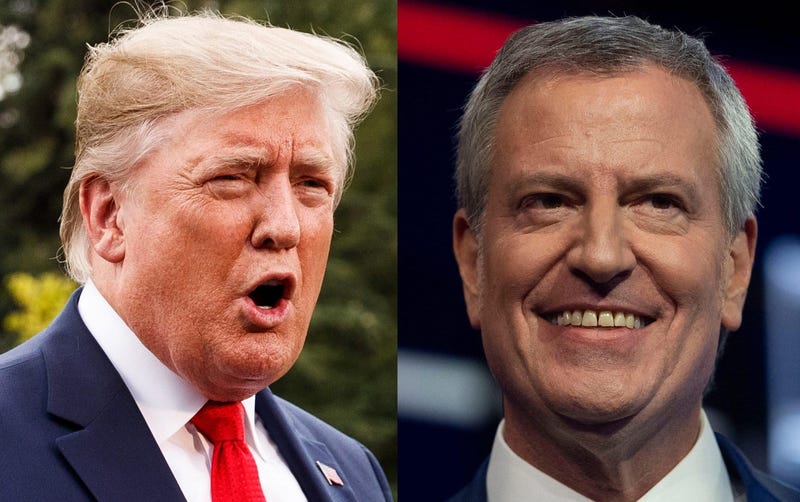 The president trashed the mayor's leadership during an appearance Tuesday on Fox News, saying de Blasio has been "horrible" and that the city is "going bad."

“What’s happening in New York is so horrible for our country. What they’ve done—what Mayor de Blasio has done to that city in a short period of time is horrible,” the president added.

The mayor fired back during his daily briefing Wednesday.

"When President Trump left New York City, I had been mayor for years," de Blasio said before adding sarcastically, "I'm glad he recognized that what we did in the city was continue to make it the safest big city in America, add more jobs, improve our schools."

De Blasio said New York City was and is a "wonderful place."

The mayor took another swipe at the president by adding, "The sad reality is nobody has done more to set back New York City than Donald Trump because he failed the city and America with his handling of coronavius."

"If we had presidential leadership we wouldn't be in the mess we're in right now," de Blasio added. "New York City is dealing with some tough times, and guess what? A former New Yorker helped bring it to us by failing to address the crisis staring us in the face."

The president also slammed the mayor and the city during a White House briefing earlier Tuesday.

Trump opened the news conference, which was supposed to focus on coronavirus vaccines, with remarks "to address the violence, looting, and rioting taking place in the Democrat-controlled cities of New York, Portland, Chicago, and Seattle."

He called on the mayor to reinstate the NYPD's anti-crime unit which was shut down in June amid protests sparked by the death of George Floyd.

Its officers were reassigned to other divisions.

The president falsley stated during the briefing that the city had fired police officers without justification.

"The mayor, Bill de Blasio, should immediately hire back all of the police who were fired without justification. They were fired. I guess that’s part of 'Defund the Police' by the Democrats. They should hire New York City’s Finest back. You have some incredible policemen doing specific jobs that nobody else can do, actually, when it comes to terrorism and other things," the president said.

However, no officers have been fired.

In late June, the City Council passed a budget that shifted $1 billion from the police department to invest in youth and social programs by cancelling an NYPD recruit class that would've started in July, reassigning officers to ensure patrol strength, reducing overtime and lowering spending on contracts and non-personnel.