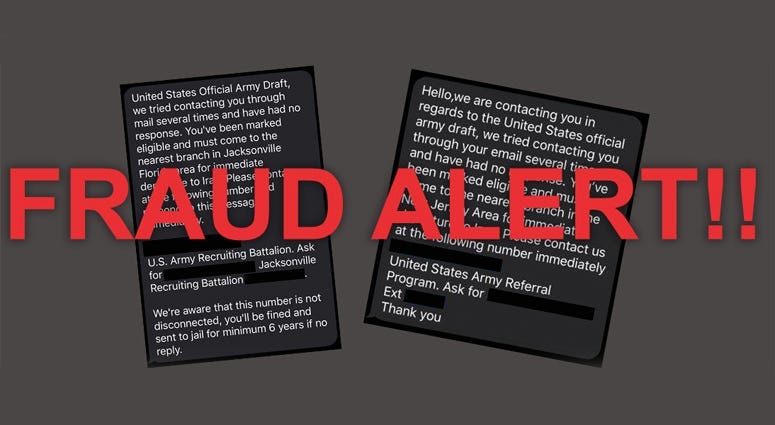 One of the texts reads, "Hello, we are contacting you in regards to the United States official draft" and tells the recipient they've been marked eligible to serve and must report to the nearest military branch.

One message threatens a fine or jail time of a minimum of six years for failure to respond.

The U.S. Army Recruiting Command said they have received multiple calls and emails about the fake text messages.

"U.S. Army Recruiting Command wants to ensure Americans understand these texts are false and were not initiated by this command or the U.S. Army," they said in a statement.

It's not clear how many people received the messages. The two examples provided by the U.S. Army Recruiting Command appeared to be addressed to people in New Jersey and Florida.

Fact check: The @USArmy is NOT contacting anyone regarding the draft.

Text messages currently circulating are false and are not official Army communications.

While there have been plenty of "World War 3" memes spreading on social media during the latest tensions with Iran, there is no active draft.

In the event Congress passed and the president signed into law a re-establishment of military conscription in the United States, the Selective Service System arm of the executive branch of government would enter draft mode and begin a multi-step process.

On Twitter, the Selective Service System said it is not contacting anyone regarding a draft.

"Please disregard any text messages received from people claiming to be the Selective Service or US Army," the tweet read.

The draft has not been in effect since 1973.