NEW YORK (WCBS 880) — Nearly two decades after it was destroyed on 9/11, the reconstruction of the St. Nicholas Greek Orthodox Church and National Shrine is starting up again after a two and a half year pause.

The project has been plagued by years of disputes and a financial crisis at the Greek Orthodox Archdiocese, which forced a suspension of construction in 2017.

Now, an agreement hammered out in January among Gov. Andrew Cuomo, the Port Authority and the archdiocese has resulted in the funds being raised to complete the rebuilding.

The expectation is that the tiny Greek Orthodox church will open next year in time for the 20th anniversary of the terror attacks, which buried the old church in rubble.

"We are going to build the church, we are going to complete the national shrine, and it will be completed by Sept. 11, 2021 — the 20th anniversary of 9/11," said Michael Psaros, co-chair of the Friends of St. Nicholas, the non-profit leading the effort to rebuild the church. 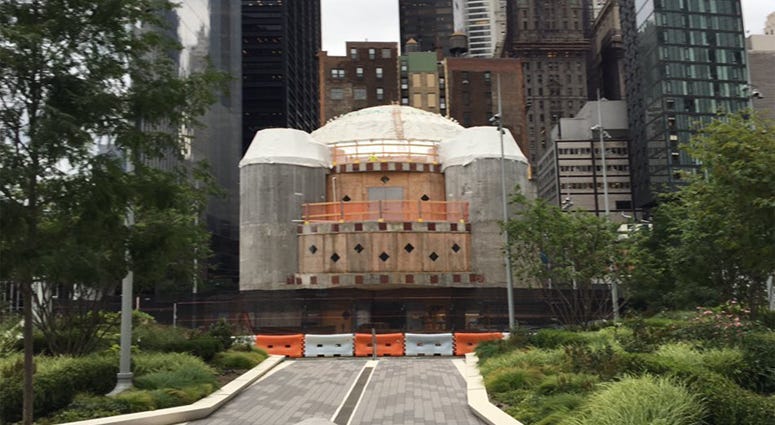 Psaros is on the 13-member board of the organization, which has been involved in raising the $45 million needed to complete the $85 million design by Spanish architect Santiago Calatrava.

"Between January 2 after that historic meeting and just three months later we raised the $45 million in cash and pledges required to complete the national shrine," Psaros said.

He believes the rebuilt church will be a powerful symbol for all.

"You have the museum, you have the reflecting pools, and now you will have a church open to people of all faiths, all creeds, all nationalities," Psaros said. "This is the only religious institution at ground zero and most people believe it will be the most visited church in New York City if not the United States."

The new St. Nicholas Greek Orthodox Church is going up in Liberty Park, just to the east of Cedar Street where the old church stood for 85 years before it was destroyed on 9/11.

Gov. Andrew Cuomo will be on hand Monday for a ceremony marking the resumption of construction at the site.

Archbishop Elpidophoros of the American Greek Orthodox Church will bless the site as a crane lowers the first skylight into the church’s iconic dome.