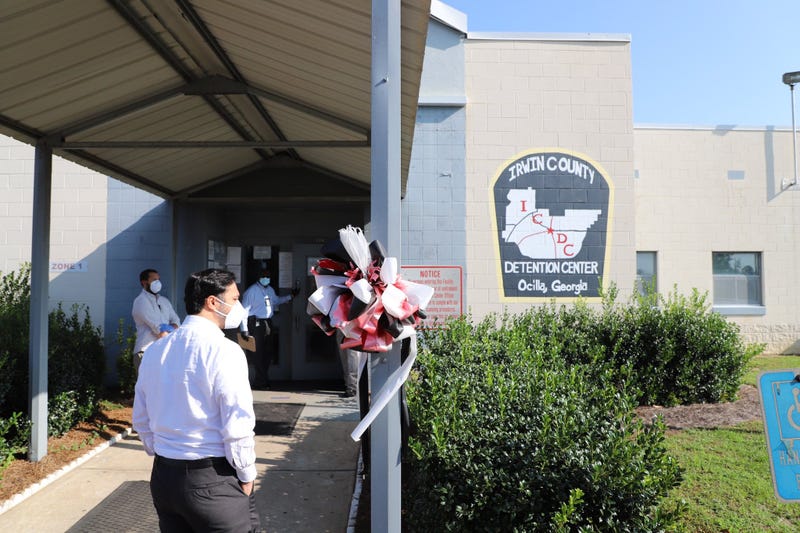 NEW YORK (WCBS 880) -- Members of Congress, including a representative from New York, visited a much-maligned immigrant detention center in Georgia on Saturday that they say should be shut down.

Congressman and Congressional Hispanic Caucus member Adriano Espaillat was among those who visited the Irwin County Detention Center, about 200 miles south of Atlanta. He said he heard “horror stories” from women who were “subjected to inhumane treatment” at the center.

“We were told how they tried to do a facelift on the facility before we got there,” Espaillat said. “But that didn't deter the women from telling the truth. And the truth is that they've been subjected to inhumane conditions. This facility should shut down.”

Today, I am at the Irwin detention center to investigate the serious violations of the law happening at Irwin County. #InvestigationatIrwin pic.twitter.com/QastcP9PwB

At least 60 of the immigrant women saw gynecologist Dr. Mahendra Amin, who is accused of performing hysterectomies without their consent.

Members of @HispanicCaucus @HouseJudiciary during an investigation of the Irwin County Detention Center.

Women detained inside described the prison conditions as torture and showed documents of medical procedures without informed consent.

Cameras were not permitted inside. pic.twitter.com/ek6oPcRTUY

Many of the allegations against the doctor were first revealed in a recent complaint filed by a nurse at the detention center, Dawn Wooten, who alleged that many detained women were taken to an unnamed gynecologist whom she labeled the “uterus collector” because of how many hysterectomies he performed.

Bryan Cox, a spokesman for U.S. Immigration and Customs Enforcement, confirmed to the Associated Press that Amin would no longer be seeing patients from the detention center, but declined to comment further, citing an ongoing investigation by the Department of Homeland Security’s inspector general.